Is "Lincoln" just a big yawn?

Spielberg's history lesson, with its great cast and undoubted significance, may be too uncool for the Oscars 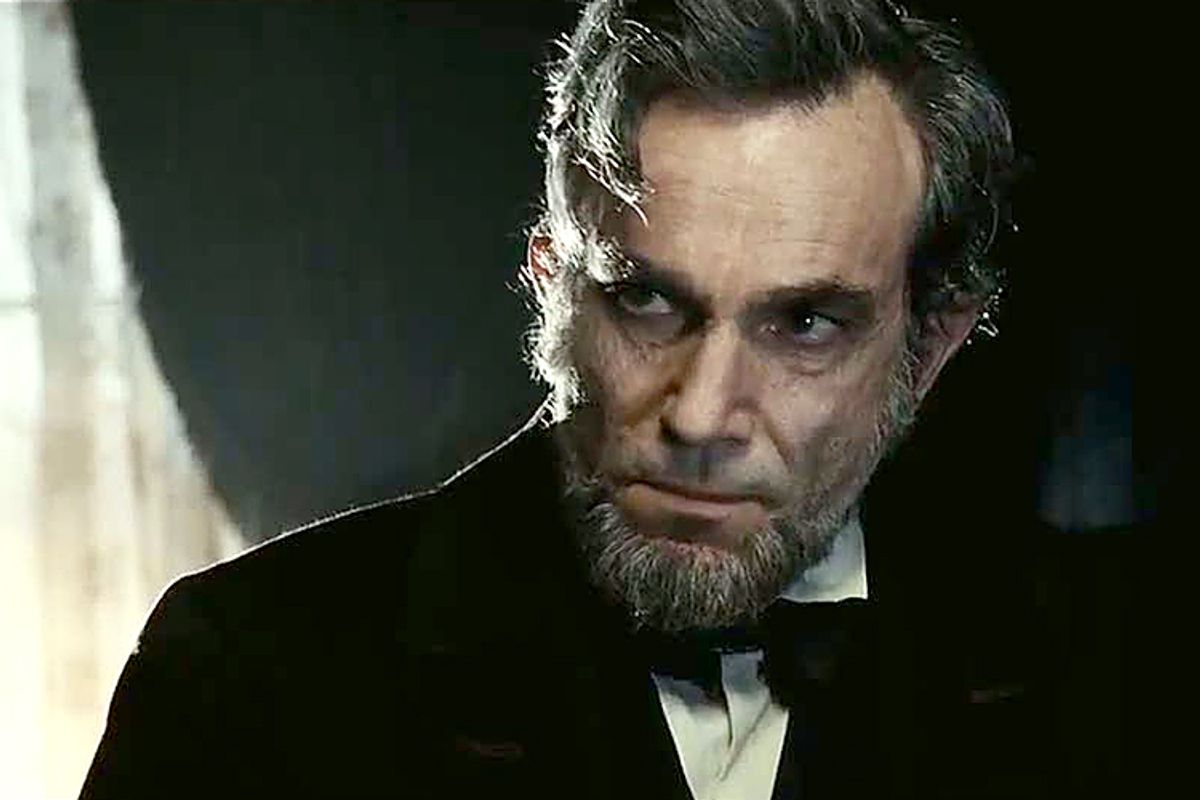 If Ben Affleck’s “Argo” is indeed named best picture in Sunday night’s Oscar ceremony, as most people in and around the movie business now expect, then one of the lingering questions for Academy-watchers will be: What the Sam Hill happened to “Lincoln”? Steven Spielberg’s historical opus seemed like a film perfectly constructed to win awards – which may, in a sense, have been the problem. A gorgeously detailed and beautifully photographed recreation of a pivotal moment in American history, it features a star-studded cast anchored by a great performance from one of the leading screen actors of our day. Tony Kushner’s glittering screenplay is alive with ideas, Lincolnian anecdotes, philosophical collisions and parables about politics and power.

Let’s acknowledge right up top that I’m engaging in armchair analysis of an event that hasn’t actually happened, which runs the risk of being totally wrong and pushes Oscar-season speculation into stretchy, Silly Putty terrain. Still, I have a fairly simple hypothesis to offer, one that dovetails with the recent announcement that the Academy Awards are no longer actually called "the Academy Awards." In a recent piece complaining about “Argo,” I cracked that “Lincoln” was the perfect Oscar movie -- if the year were 1994. The more I think about that, the more I think that’s actually (James Lipton voice) an extremely brilliant analysis. Those of us who assumed “Lincoln” was unbeatable (which definitely includes me) were operating on outdated assumptions about the collective mentality of Academy members. Despite all the somewhat-true stereotypes, Oscar voters have gotten at least a little younger and more diverse in recent years, and a great deal more concerned with image questions like perceived relevance and hipness. If “Lincoln” loses despite all its apparent strengths, it’ll be because it’s too square for the Oscars. Terrifying, I know.

Reviews of “Lincoln” on its release were overwhelmingly positive – if slightly less so than for “Argo” or “Zero Dark Thirty” -- and pundits fell all over each other to proclaim its contemporary relevance. (Although the film was released just after the November election, Disney made sure journalists could see it ahead of that event, so we could start arguing about whether it was more a commercial for Obama or a rebuke to Obama.) Re-reading some of those reviews on Rotten Tomatoes, however, you can see a slightly defensive tone creeping in over and over again, with critics seeking to reassure readers that the movie was not a fatally earnest and boring history lesson, despite being set in the 19th century and featuring a lot of men with beards and frock coats arguing with each other. This is all brilliant hindsight, of course, but that anecdotal unease about the uncoolness of “Lincoln” has lingered in the air ever since – I know people who haven’t seen it for precisely that reason -- and can now be seen as a precursor to the Academy’s guarded reaction.

Interestingly, the general public has not seemed bothered by that question. If “Lincoln” is boring, it’s around $180 million worth of boring so far, in the United States alone. Even in a year when the Academy is honoring highly successful films – something of an anomaly, in recent Oscar history -- that’s an impressive number. While it’s possible a best-picture win will push “Argo” to that box-office level, or beyond, it’s far from a sure thing. But it’s become abundantly clear in recent years that box-office numbers and overall popularity are irrelevant to the Oscar race, or nearly so. Bigelow’s “The Hurt Locker” barely earned back its $15 million budget; “The Artist” made less than $45 million, and “No Country for Old Men” less than $75 million. Even relative hits like “Slumdog Millionaire” or “The King’s Speech” generated puny returns compared to the superhero action spectacles that keep Hollywood afloat. (And both of those earned far less than "Lincoln" has already.)

This is pure speculation, and I have no marketing or demographic data to back it up, but I wonder whether Hollywood insiders perceive the admittedly large audience for “Lincoln” as skewing toward earnest moms and dads with bad pants in flyover country. So it’s like: We love you, and we’re delighted you came out to see this old-style historical costume drama in such surprising numbers. But we don’t love you quite as much as we love the perceived audience for “Argo,” which is younger, more urban and bicoastal, liberal and educated but not overly serious, more interested in having a good time on Friday night than in pieties about democracy. In a word, more Affleck-y.

OK, it’s possible that I’m overthinking this the teensiest bit, and that even if that analysis is right, it’s happening on an unconscious level. Like the voters in all the Hollywood guilds who have already given awards to “Argo,” maybe Academy members just liked it better. You can say that’s because it’s a more conventional kind of entertainment, or because it paints such a flattering portrait of the film industry, or because they themselves have become more Affleck-y than we customarily believe. When I posed the hypothetical Oscar-failure of “Lincoln” as a Twitter question, I got all kinds of hilarious and/or informative theories in return (along with acrid reminders that I was writing the epitaph before the funeral). Quite a few people pointed out, however, that “Lincoln” just isn’t the kind of movie that wins best picture these days.

Some readers suggested that Disney and DreamWorks pursued a flawed campaign strategy on “Lincoln’s” behalf, lying low and relying on Hollywood’s guilds to support the movie (which they then didn’t do). Philadelphia critic Sam Adams tweeted: “My feeling, not based on anything especially, is that people like and respect it more than they love it.” (Thank you for boiling my entire article down to 140 characters, Sam.) New Yorker critic and blogger Richard Brody suggested, a bit cryptically, that the problem lay in the inherent difficulties of a Spielberg movie about an assassinated president: “Think of the overtly uplifting ending, in color, tacked onto ‘Schindler’s List.’” Brody later added: “The thought-bubble would be, in effect, ‘Does he have to die in the end?’”

The mysterious tweeter known as Ted Nope (in parodic tribute to Ted Hope, a well-known New York indie-film producer and blogger) weighed in simply: “Lincoln” is “too smart for the Academy’s dumb ass.” While film journalist and author Mark Harris cannot be viewed as a neutral observer in this case – he is, after all, married to Tony Kushner – he supplied a useful chronology of the “prematurity and groupthink of prognosticators.” “Silver Linings Playbook” was the supposed best-picture favorite in September, Harris points out. Then it was “Argo” in October, “Lincoln” in November, “Les Misérables” in early December, “Zero Dark Thirty” later that month, then “Lincoln” again after the Oscar nominations, and finally “Argo” one more time. In this reading, “Lincoln” only sticks out because it was the “last bad call people made.”

Various people, in various ways, reminded me that a Spielberg-to-Affleck generational shift has already happened in Hollywood and within the Academy, and it’s just that we haven’t quite gotten used to it. Whatever happens on Sunday, a breezy, mid-budget genre picture with a veneer of vague sophistication is far more typical of recent Oscar-winners than is a big, thumping historical drama from which We Learn Things. The only costume drama to win best picture in the last 12 years was “The King’s Speech” – no, you can’t count “The Artist,” a postmodern fluke with a distinctly contemporary aesthetic -- and the last big-budget Hollywood spectacle to win was “The Lord of the Rings: The Return of the King” in 2003.

“Argo” is of course a historical drama of a sort, one that reprocesses the tortured contradictions of Cold War politics circa 1980 into a fun, fast-moving and essentially formulaic entertainment driven by classic rock, funny clothes and amply blow-dried hair. It’s a clever and canny film that renounces any serious ambitions, rather than a thoughtful and serious film that proclaims its own profundity. There are some complicated aesthetic issues going on here that we can’t resolve right now, and I definitely don't want to come off like I’m trying to convince you that movies should be more like school. Let’s leave it at this: To win the Oscar, “Lincoln” needed a little more Van Halen.