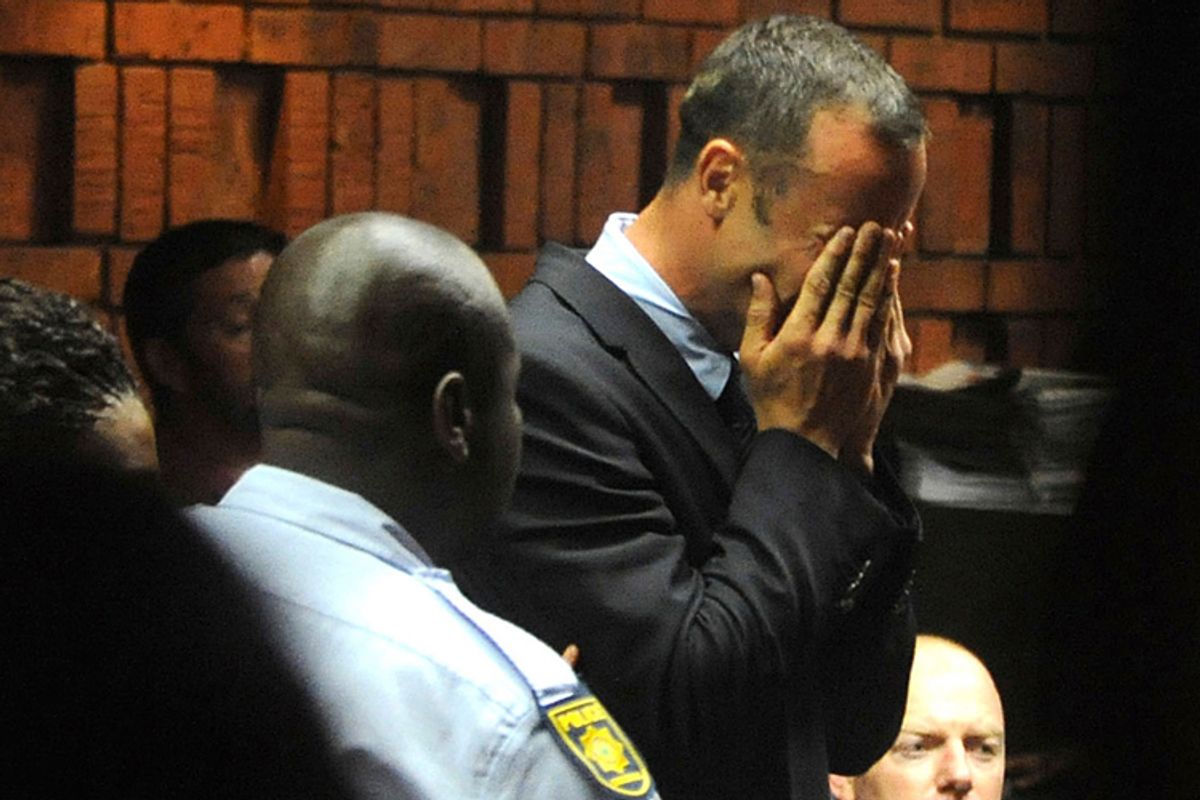 If there's sense to be made of what happened to Reeva Steenkamp in the home she shared with the double amputee Olympic sprinter Oscar Pistorius, it's a bleak sort of sense. What happened is beyond dispute: Steenkamp is dead, and Pistorius is the prime suspect. Without relying too much on anonymous police leaks, it appears that the cops think Pistorius murdered Steenkamp in cold blood, shooting her once in the bedroom before she fled into a bathroom, where he shot her several more times through the door, killing her. He may or may not have caved in her head with a cricket bat, though it's unclear how that account fits into the previous timeline. The specifics are vague, but the generalities—the one governing general fact, which is a young woman murdered—are specific enough. We know enough to know that this is awful.

So what's certain is that Steenkamp is dead; her family, an ESPN.com headline tells us, most helpfully, is "looking for answers." In that headline, "answers" should really be "details." We have answers, and maybe one important one: that people, even those who have struggled heroically against their own limitations and been lionized for it by others, are capable of violent and horrifying crimes. Pistorius' story isn't that remarkable save for the fact he's a double amputee; would "South African sprinter murders girlfriend" even register in the daily cacophony of sport-shit if he had toes? Or if Steenkamp had been less beautiful, and less easily repackaged as morbid tabloid cheesecake?

And there's another question with an answer: the one that's often on people's lips after a crime like this is, "Can you believe it?" The answer, inescapably, is: yes. Yes, we can believe it. No, we ought not be surprised. No, this is not really anything new, regardless of what we know or don't—and I won't pretend to know any more about this relationship, or about Pistorius himself, than the average American sports fan. The extreme violence, the insanity that powers it: this is a fact of life, as common (that is, blessedly uncommon) in sports as anywhere else. And an incident of domestic violence, where the victim is almost by definition unprotected? Why would that surprise anyone?

For every tragedy involving a famous athlete and a swimsuit model, there are hundreds of thousands of others that seem less capricious. They're just part of the noise of our lives, as a biological necessity, as Nate Silver wrote. As humans, “we perceive far more inputs than we can consciously consider,” he said, “and we handle this problem by breaking them down into regularities and patterns.” They roll off the tongue so easily—"Did you hear about Mindy McCready? So tragic"—but for the people they touch they are the opposite of pattern: They are defining. The indomitable sprinter and the law-student model are realer than they seem; this can happen to them, too. Here is a way to remember this, or not to forget it: when you watch sports, turn off the fucking volume.

I love sports, which are beautiful and fun and speak to something ideal in the human condition. I personally pray at the altar of a beautiful little book called The Grasshopper, by a Canadian philosopher named Bernard Suits, which basically says that if all our needs were taken care of, and we had no worries, we would spend our time playing games. This is not exclusionary of pastimes like music, which Suits can paint into a game, as he can anything else (he's a good philosopher), but he argues that the act of living is the act of playing games, even when we don't know it. The fairness of these games is not always—in fact, rarely is—equal, but sports, especially professional ones, are the logical extension of this theory, which explains at least in part why we're drawn to them. We can make a game of watching games at a high level. This is, in fact, what sportswriting or sports-blogging or sports-tweeting is. We hate hacks like Skip Bayless because they make the game no fun: too big, too fake, too coarse. The game becomes war, when really it's best used as war's rhetorical antidote.

But for many sports fans, watching sports and listening to the announcers are one and the same, despite the fact that they are—at least in terms of sports delivering the desired hit of transcendence—fundamentally at odds. We make a game of chronicling our sportscasters' awful mistakes, and it's quite helpful and often fun—see: @PhilSimmsQuotes—but it's really a contest to see who can make the best chicken salad sandwich out of a dense, reeking pile of chicken shit.

This is fine, and has its purpose, but it's a side game. The action is what's important. Muting the television might make you watch the game better or it might not. But you won't get bad signals, and television announcers basically exist to send them. They're the ones that tell you people aren't just great athletes but also great people—and they tell us this while our minds are most open and suggestible and ready to believe that this might be so, despite all the hard evidence we have about humanity and athletes and everything else. It is silly, sure, but it seeps.

This isn't an argument to kill your television so much as it is one to embrace it for what it's good at, and only that: watching the beautiful proof of sports, not listening to the careless hype that soundtracks it. It was an article of faith, years ago, that "the smaller the ball, the better the writing"—that's why baseball, golf and the Olympics (no ball at all, often) are overrepresented in the ink-and-paper era. But there is still time to fill in this era, and the NFL, with its 11 minutes of game time spread across three hours, presents endless opportunities for hyperbole and mythmaking and clock-killing bullshit. The NFL has one great thing going for it, and that's that the average fan hasn't even begun to understand it, really. It's so complicated, and looks so simple, that it's something of a magic trick. We watch with our minds open, ready and eager to understand, and get the worst explanations—it's want-to, it's heart or guts or balls—in real time.

American Olympic coverage is even worse. With no Cold War binaries in place, our broadcasts make Our Side out to be heroes and frantically co-opt anyone else who fits the "television star" narrative, like Oscar Pistorius. It does not matter to NBC what Oscar Pistorius is or isn't. To them, he's a star and a reason to care. Turn off the sound, he's just another world-class runner who isn't quite as fast as his peers, albeit one without feet and with a dramatic story culminating in the race being televised at that moment.

Good stories, the really good ones, stick. The difference between those and the prefab ones are clear: the really good ones are good, even when they're over. Think of Claressa Shields, the first-ever gold medal winner in women's boxing, and a junior at a high school in Flint, Michigan. Or think, as I do, of Cathy Freeman, winning the 200 meter in Sydney, an aboriginal winning the cheers of her "home" country while, it must be said, dressed like an alien. It's been 13 years since that happened, and I will still watch the video sometimes when I'm drunk, and sometimes I cry.

I could cry for Reeva Steenkamp, too, but the sad truth is that I've learned how not to buy into stories like this. If I cried for her, I'd cry for them all, because Oscar Pistorius isn't special to me, and he never was—with the sound off, he was just what he was: a human, surprising and disappointing in all the ways humans are. If sports are your thing, you can learn to separate real transcendence from the pasteurized, repackaged kind. You don't need to be told what the great stories are; you are saddened but not shocked by the fall of an incautiously canonized human like Oscar Pistorius. If you wait for the real thing to come to you, it will, and those stories will move you more than you ever thought possible, over and over and over. And if you eat everything you get fed, you'll get sick.