The recession was her fault

Meet Wall Street's scapegoat, the one person to get jail time for the most massive mortgage fraud in history 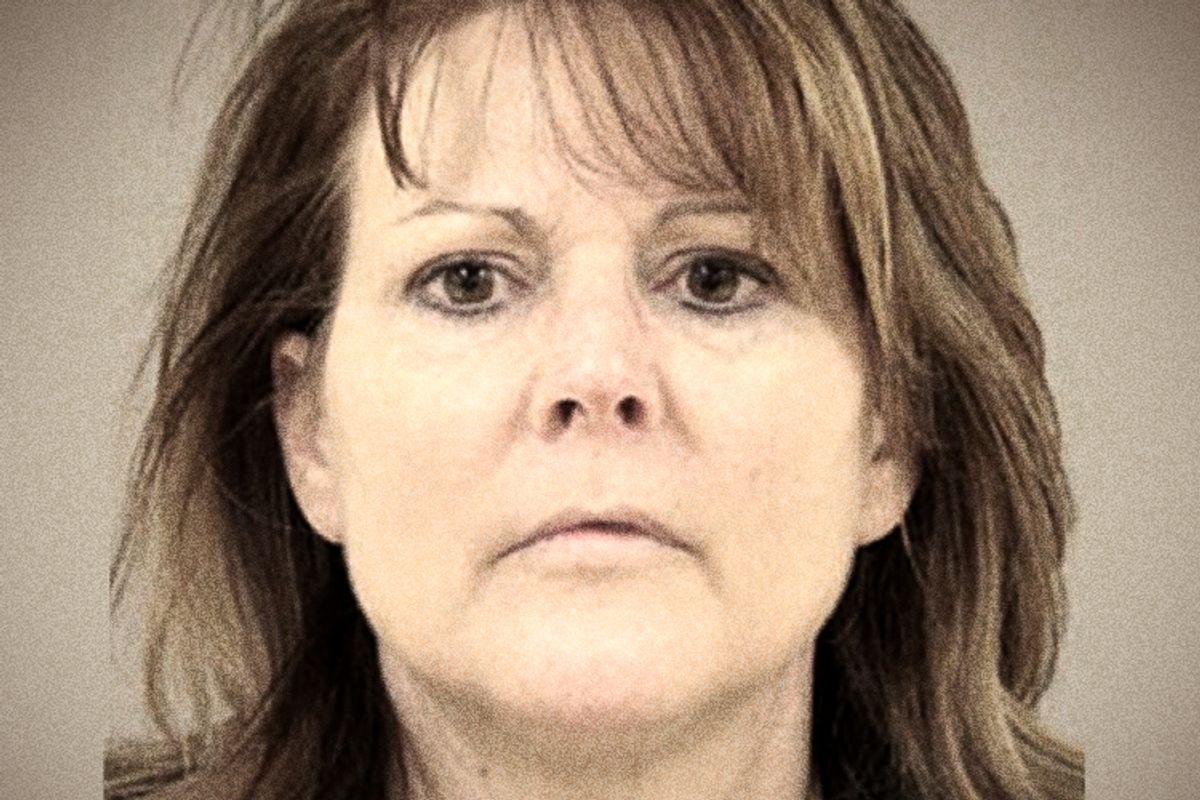 You remember Lynndie England. She was the Army Reserve soldier photographed at the Abu Ghraib prison giving the thumbs-up sign in front of a set of naked detainees. A lower-level reservist, she was among the few at Abu Ghraib who actually served prison time.

No officers who authorized and directed the torture and detainee abuse, either in that prison, at Guantanamo Bay or anywhere around the world, ever faced trial. But Lynndie England became a symbol for the sorry state of the rule of law in America, where a few small “bad apples” get held to account, and the higher-ups who devised and directed the criminal activity get off scot-free.

There’s a Lynndie England for the financial crisis, too.

Meet Lorraine O. Brown, an individual singled out for actual jail time for her role in the massive mortgage document fraud that plagued this nation. Like England, she stands alone among the multitudes of fraudsters, including those at the highest reaches of the financial industry.

Brown was the President of DocX, a company that created and processed mortgage-related documents, first as a stand-alone unit, and later as a subsidiary of the document processing giant Lender Processing Solutions (LPS). And like Lynndie England, Brown committed a series of legitimate crimes. From 2003 until 2009, DocX routinely forged mortgage documents.

Brown directed the scheme, whereby low-wage temporary workers would sign the documents in the name of executives at DocX, who were authorized as signers by mortgage servicers. Then, different temporary workers would attach fake notarizations to the documents, attesting to their veracity. This “Surrogate Signer” program allowed DocX to execute thousands of documents per day, increasing their profit margins.

These forged mortgage documents were distributed to county land recording offices and state courts all over the country. After the collapse of the housing bubble, when these documents were put to use in foreclosure or bankruptcy cases, the scheme became apparent when people started comparing multiple mortgage documents with the names of authorized signers like Linda Green, all of which had markedly different handwriting.

This scheme was part of the giant bundle of illegal conduct known as foreclosure fraud. According to statements of fact from the Justice Department, from 2003 to 2009 DocX recorded over one million fake documents. That’s probably a low number. DocX wasn’t just forging signatures, they were fabricating entire loan files. During the bubble years, they created a now-infamous mortgage fabrication price sheet, where mortgage servicers, who had trouble proving in court that they owned the homes they wanted to put into foreclosure, could purchase, at low prices, whatever documents they needed. To “Recreate Entire Collateral File,” basically the whole set of documents including the promissory note? That would set a servicer back $95.00.

The larger foreclosure fraud scandal eventually exploded in late 2010, and after over a year of wrangling, the five biggest mortgage servicers – tiny outfits with names like Bank of America, JPMorgan Chase, Wells Fargo, Citi and Ally/GMAC – got their legal liability released in a sweetheart settlement. But Lorraine O. Brown was not so lucky. Her biggest mistake was lying to the FBI, claiming that she never instructed any employee to forge a document or participate in a "Surrogate Signing" program. More important, LPS had closed DocX by this time, making Brown expendable.

Chris Koster, the attorney general of Missouri, indicted Brown, DocX and LPS for forgery. But Koster did not attempt to flip the smaller fry to get to the higher-ups, the standard strategy of most criminal prosecutors. Instead, LPS cut a deal with Missouri for a mere $2 million, and in exchange “cooperated” in the Brown investigation. This severed Brown from the parent company, which not only had to know what was happening at DocX, but used basically the same assembly-line mortgage document execution at its other facilities. In a September 2006 newsletter called “The Summit,” managers for LPS, then known as Fidelity National Foreclosure Solutions, openly touted the process that allowed them to “execute 1,000 documents per day.” Brown’s DocX wasn’t the only forgery and fabrication shop in the United States. This was industry practice.

Furthermore, evidence of the DocX forgery and fabrication process could be used to reach even higher. Who directly solicited the company for fake documents? The foreclosure mill law firms, which then knowingly submitted them into courts. Who directed the foreclosure mills to do that? The mortgage servicers, which are typically units of the biggest banks. Furthermore, there’s no reason to ever request the “entire collateral file” unless you have no other way to generate evidence to prove underlying ownership of the loan. This speaks to a faulty mortgage transfer process, improper securitizations, and generally fraudulent practices at the heart of Wall Street.

None of that was pursued. Instead, Lorraine O. Brown felt the full weight of US law enforcement. In part because of the aggressiveness of the Missouri attorney general, the Justice Department reached a criminal plea bargain with Brown, where she admitted to wire and mail fraud, as well as lying to the FBI. She faces a $250,000 fine and up to five years in prison. Missouri announced their own plea arrangement on counts of forgery and perjury, which carries another 2-3 years of prison time (though she will probably serve this concurrent with the federal time). Sentencing is expected April 23.

Other states are piling on. Last week, in Michigan, Brown pleaded guilty to a racketeering charge. She faces as much as 20 years in prison for that, with sentencing expected May 2. And there may be more charges to come in other states.

The state and federal charges against Brown claim that she committed a conspiracy to forge and fabricate mortgage documents. But apparently it was a conspiracy of one. Nobody else participated in this scheme, at least according to the statements of fact that the Justice Department put out. They assert that Brown cleverly concealed her company’s conduct from mortgage servicers, units of some of the largest banks.

Servicers may not have known the mechanics of DocX’s fraudulent document executive, and may have nodded their head at Brown’s claims of “robust quality control practices.” But that’s just because they wanted a layer of plausible deniability – in fact for circumstances just like this. They wanted documents they could use in court to foreclose on homeowners as quickly as possible. Brown’s company DocX could provide them, and as a side bonus, the servicers didn’t have to think too hard about how the sausage was made.

Even LPS, the parent company of DocX, got away with this fraud. In addition to the $2 million settlement with Missouri, LPS settled with Michigan, the other state to convict Lorraine O. Brown, for $2.5 million. Other states followed suit. The federal government closed its criminal investigation into LPS for a settlement of $35 million, specifically for the crimes at DocX, which by their conservative estimate included over 1 million documents. That’s roughly $35 a document, about the price of a parking ticket. All in all, LPS has committed around $160 million to settlements over document fraud, which sounds like a lot until you realize they made $2 billion just in 2011.

Worst of all, while DocX has been shut down and Lorraine O. Brown is headed to jail, the forged documents themselves still circulate in state courts. The plea agreements with LPS advise them to “properly execute documents” in the future, and review all documents executed between January 2008 and December 2010, to determine which ones need to be “re-corrected.” But the Justice Department admitted that DocX started forging documents in 2003.

This is what frustrates Lynn Szymoniak, the whistleblower who helped expose fraudulent mortgage assignments at DocX and made famous the various handwriting alternatives of Linda Green.

“The most disappointing thing,” Szymoniak said, “is if I walked into a court in Florida right now, I’d see people losing their homes with Linda Green documents.”

Lorraine O. Brown did something wrong and definitely deserves to go to jail. But she was a rung in a very large ladder that extended up to the executive suites at Wall Street banks – that is, trustee banks like Bank of New York Mellon and even Deutsche Bank, and even those investment banks that worked on the securitization deals like Goldman Sachs, Morgan Stanley and Bear Stearns. They needed falsified documents because of their own improper work in the securitization process. All Brown did was provide a service. She may have created surrogate signing so she could make more money in the production of that service. But without the need for fake documents, she had no business to speak of.

Because of Lorraine O. Brown, we know that foreclosure fraud is punishable by prison time. Yet the document forgery, falsification and fakery continues, deeply damaging the system of private property rights in America, arguably what makes us a civilized society.

Only Lorraine O. Brown has gone to jail for it. Until the entire criminal enterprise is rounded up and brought to justice, we will see the same kind of schemes, with other Lorraine O. Browns, in the future.