Seth MacFarlane to Rush Limbaugh: Now I understand why conservatives hate the media

Rush says he sent MacFarlane a mash note, and compares Michelle Obama's Oscar appearance to something out of Orwell 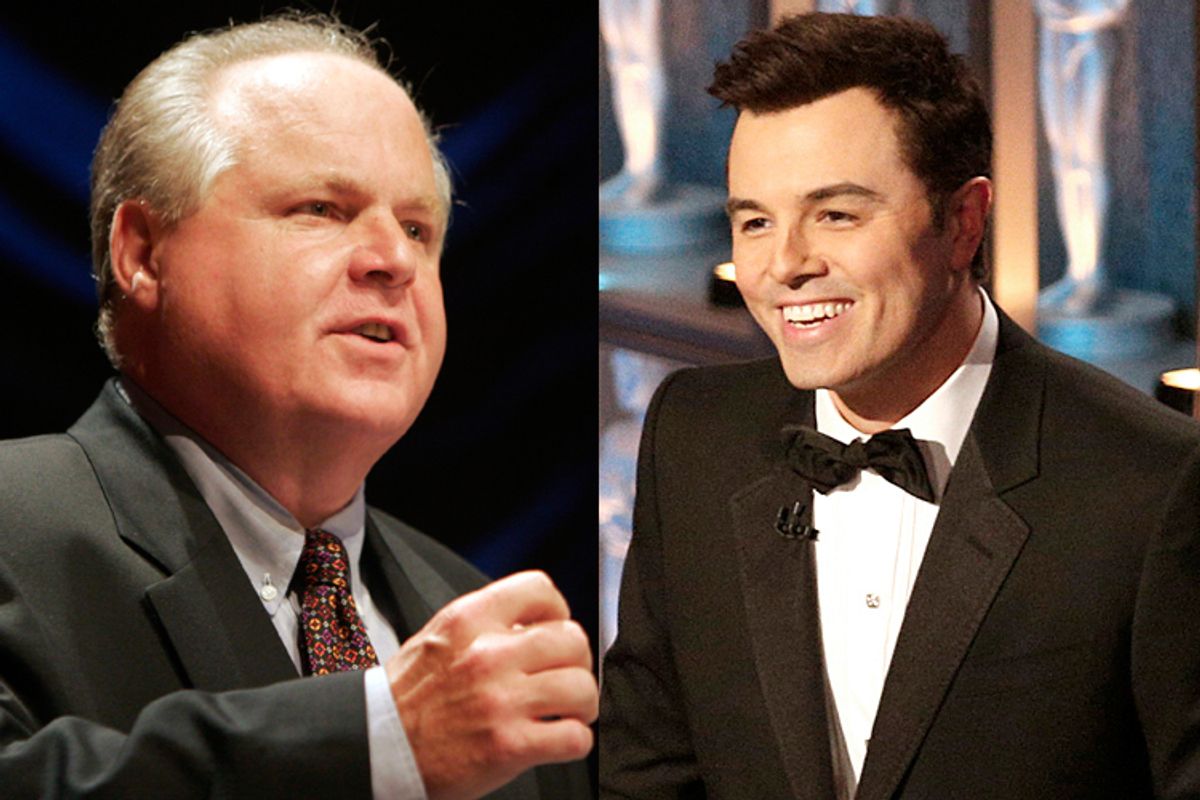 On Monday's radio broadcast, Limbaugh said he sent the widely derided Oscars host an "attaboy note." MacFarlane's response, according to Rush? "You know what? I kind of understand how you conservatives feel about the media now."

Limbaugh was fired up about the Oscars, and saw evidence of a liberal conspiracy to create a totalitarian world, and also a political tug-of-war between Steven Spielberg and Harvey Weinstein.

Speaking of Michelle Obama's appearance via video link to hand out the best picture Oscar with Jack Nicholson, Limbaugh said:

When I saw Moochelle Obama on that giant screen, I mean, she dwarfed Nicholson.  If you look at that, if you saw it, that screen on that stage, Moochelle and the military people, gosh, they weren't even referenced, those military people.  I don't know what that was.  Was it a cocktail party?  I think they were props.  Anyway, she looked bigger than life.  I mean, she looked like anybody would have, don't misunderstand, but just one bite and swallow that whole room, that's how big.  The optics, of course, are what matters.  And I thought of 1984, the Macintosh ad from the Super Bowl in 1984, exact type of scenario, except Michelle Obama was actually the Dear Leader of this, obviously a totalitarian state.  And the Dear Leader was making some giant speech and fist pounding and robotic citizens were sitting there nodding, everybody in total agreement, and a lone person runs down the center aisle and obliterates and destroys the screen.

How did Obama end up at the Oscars?

Now, there was an earlier awards event this year. I don't know what it was. The People's Choice, the Golden Globes, whatever. I don't know what it was. It's the one that Clinton showed up at, and Spielberg arranged that. Now, one thing we do know is that Moochelle's appearance, her hijacking the Epidemic Awards last night, was Harvey Weinstein's idea. So the consensus is that Weinstein wanted to show everybody that he's bigger and more powerful than Spielberg.

Speilberg got Clinton but Clinton's a has-been. Clinton's yesterday. Harvey was able to get Moochelle.