A mash note to one of "Bunheads'" bunheads

It was the season of Ginny 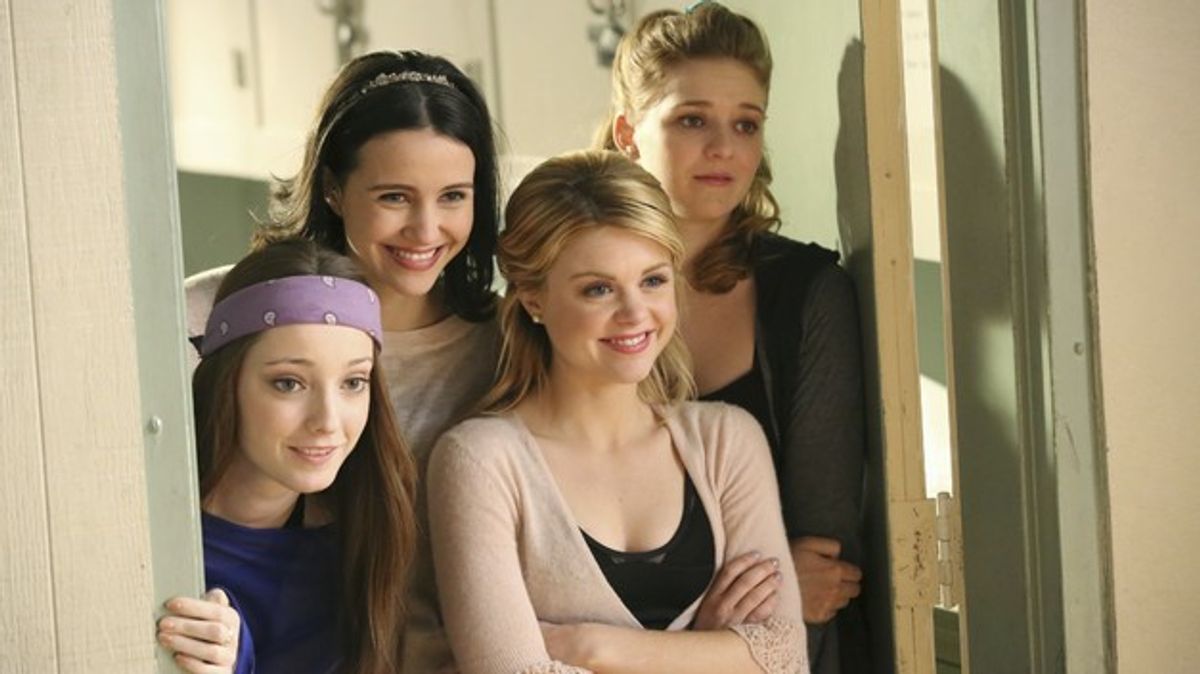 “Bunheads” finished its first season last night, or rather, the all too brief, eight episode second half of its first season. On the occasion of this hopefully brief interlude in the free flowing of “Bunheads”— I don't want to contemplate the possibility that the show won’t be picked up for a second season— I want to shout out the revelation of the last eight episodes, young Ginny, the bunhead I previously knew only as mini-Megan Hilty but who got so good, so fast I finally looked up her name: Bailey Buntain, breakout bunhead.

In the first batch of “Bunheads” episodes, creator Amy Sherman-Palladino focused on badish-girl Sasha and very sweet girl Boo, giving both Ginny and Melanie, the other two members of the show’s foursome of high-schoolers, short shrift while she figured out exactly what they were good at. This season, she figured it out: Melanie developed an agro streak (producing this, the best sight gag of 2013 TV thus far) and Ginny, well, Ginny turned out to be good at everything.

Of the four girls, Buntain is the most suited to Sherman-Palladino’s rat-a-tat dialogue: except for Sutton Foster’s Michelle, no one sounds more natural whipping off long, extended, breathless dialogue rants. This may sound like an insult, but I don’t mean it to: Buntain seems like an Aaron Sorkin muse. As a dancing, singing, fast-talking blond dame full of steel and sweetness, she is lucky she was only 12 years old when “Studio 60” was on the air, or we might all know her as Harriet Hayes.

Because her character has had time to develop, Ginny’s not as recognizable a teen archetype as Boo or Sasha—  the goodie two shoes and the angry, talented teen with crappy home life i.e. the Molly Ringwald and female Judd Nelson of the bunch.  Ginny’s not as damaged or neurotic as Sasha, but she’s not as undamaged or non-neurotic as Boo. She makes some mistakes and not others. She’s a mostly hyper-competent caretaker (she can sell real-estate!), but occasionally in way over her head (tongue tied around a boy; vacillating endless about auditioning for a play; really jealous of her best-friend’s new friend.)

On last night’s episode Sasha decided that it was time to have sex with her goth boyfriend, and insisted that her entire crew read up on intercourse. There was a wonderful, wordless musical montage as the girls beefed up on classic sex book that ended in front of a multicolor condom display. ("Bunheads" treatment of teen sex has been so calm, I wish other shows would  take note.) By the end of the episode, Sasha was still holding off, waiting to talk to Michelle. Boo, in a display of necessary force, told Sasha to stop bossing her around, she would have sex with her boyfriend when she was good and ready. (It’s a grace note of “Bunheads” that Boo, the one with the stable if frazzled, loving parents is so steady and stable about boys, and ready to proceed at her own pace, while Sasha, who has had terrible, manipulative parenting, is keen to have sex lest her boyfriend, who is totally into her, lose interest.) And it was Ginny who, off-camera, went and did it, having ill-advised sex with the boy, Frankie, she’s been futilely lusting after all season.

The loss of Ginny’s virginity was revealed at the very end of the episode, when she confessed it to Michelle. Ginny finds Michelle outside the studio and asks how Michelle’s audition was— Ginny’s never going to be totally self-involved— and then she starts to cry. It comes out in a rush: she had sex with Frankie last week, she doesn’t even think he knows her name, or will ever talk to her again, and she might be in love with him. “He was just so beautiful,” Ginny says to Michelle, which is one of the gentlest, most articulate expressions of teenage girl lust I’ve ever seen on a TV show.

Michelle, who all season long has been figuring out how to deal with the fact that she is ensconced in these teenage girls lives, that she has somehow become this trusted authority figure despite her self-conception as a mess, does what she needs to do: she reaches over and hugs Ginny. (Fans of "Gilmore Girls" will recall that Sherman-Palladino is very stingy with the hugging.) It’s a sweet bookend to the first episode of this mini-season, when Michelle returned to Paradise and Sasha tackle-hugged her: since then, Michelle’s learned something about stepping up, and being the one who takes  care. It’s a sign of Sherman-Palladino’s faith in Buntain and all her great work that Ginny was the center of the season's final scene: she earned it.