The Oscar winner's raw, awkward thank-you to his wife gave us a glimpse into the reality of married life 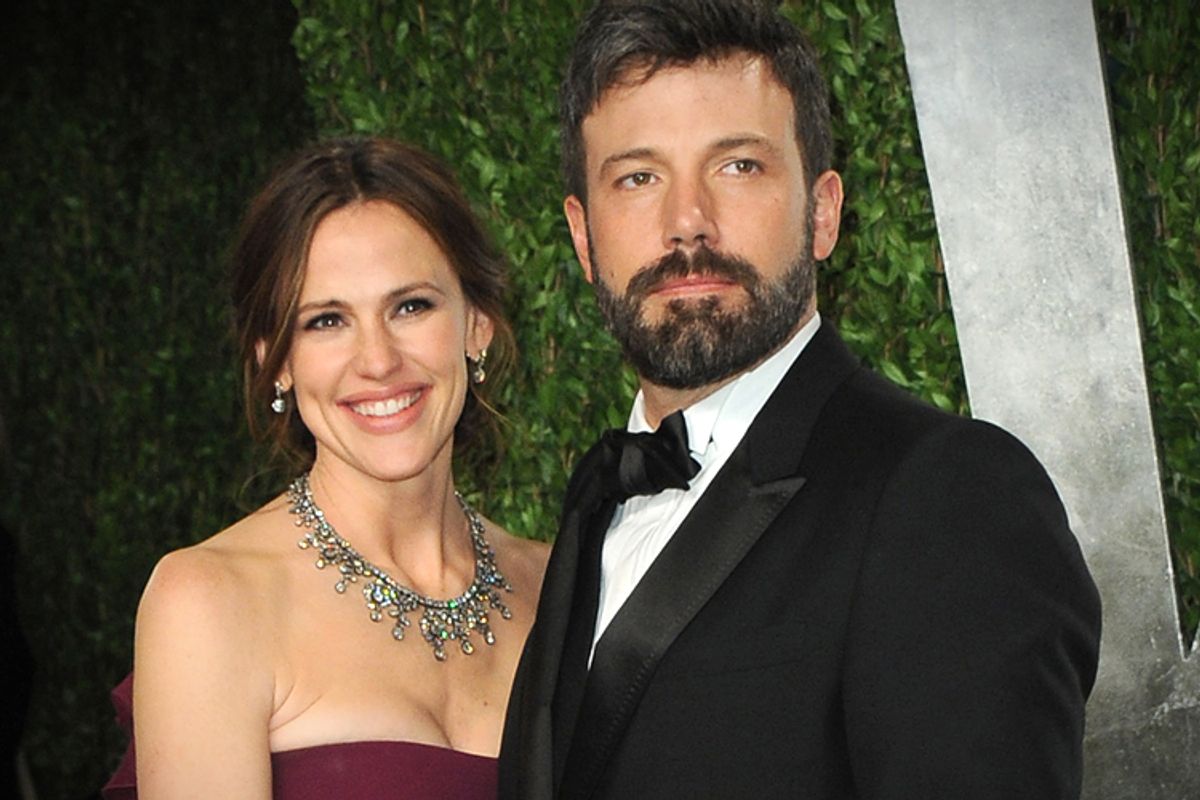 When Ben Affleck picked up the Oscar Sunday night for "Argo," the actor/producer/director/Jimmy Kimmel love slave turned those boring last minutes of the broadcast into a memorably strange statement about marriage. As he looked out at his beautiful wife, Jennifer Garner, he told her – and the world – "I want to thank my wife, who I don't normally associate with Iran. I want to thank you for working on our marriage for 10 Christmases. It’s good. It is work, but it’s the best kind of work, and there’s no one I'd rather work with." And if nothing else had happened the entire broadcast, it would have been worth it for the pinched, "Honey, whaaaaaa?" smile on Garner's face as he said that.

In the midst of the usual Oscar night big ups to co-stars and writers, Affleck's speech felt ill-timed and uncomfortably intimate. As Kate Aurthur summed it up, "There are different ways to thank a spouse that aren't 'thank you' for 'working on our marriage.' So I have heard." That's likely why OK! Magazine this week expanded on Affleck's remarks, quoting him as saying that audiences have read too much tension into the speech. "All relationships, to a certain extent, require your work," he said. "We work on it together, we try our best, nobody's perfect ... She's more perfect than I am." Nice save there, Boston.

What Affleck did in that short speech — and the reason it was so surprising – is that he tore the veil off the perpetually sunny image we tend to carry around of everybody else's couplehood. Unless the cops are getting called regularly for domestic disturbances, there's an assumption of tranquil ease around other people's relationships. Look at those two, in their Facebook album from their vacation, we think. They seem to really have it figured out! Meanwhile, in your own home, you're wondering if pubes in the drain is grounds for divorce.

It's easy in the beginning. As Chris Rock once explained, in the early part of a relationship, you're not really dating each other – you're dating each other's ambassadors. You're your best, sexiest, most novel selves. Then eventually the other sides begin to emerge – the imperfections and annoying habits and emotional baggage. Then, after all that, if you're lucky enough to have what a friend calls mutually compatible neuroses, you're going to go through experiences together, things that will require you to look at each other not just as breathless lovers. Sometimes, it's really horrible stuff, like financial disaster and disease and addiction and grief and deployment and violence and crushing disappointment. Sometimes, it's great stuff that nevertheless tests how you see and relate to each other – success, children, travel. And often, it's just the unromantic, mundane business of domestic life. Are you still going to remember to say, "I love you" to the man absently scratching the inside of his ear as he scrutinizes the kids' immunization records? Can you still appreciate the woman who's gained a few pounds, whose underwear is now workweek Spanx, when she makes a sexual overture toward you tonight – after the dishes have been put away, of course?

Affleck and Garner are absurdly rich and beautiful and successful people. Their relationship likely doesn't look like that of the average "Why can't you just close a goddamn drawer all the way like a normal person, you son of a bitch?" couple. They probably have a person on their staff whose entire job is going around closing drawers and putting the toilet seat down. But hey, they're still a man and woman in their 40s who've been together for 10 years, who are raising three children. They looked gorgeous and perfect on Oscar night, but I guarantee you they have seen each other wearing kid vomit. They have seen each other moody and difficult and have had that experience every couple does -- the one where you go to a party and an ex is there. Except that his ex is Jennifer Lopez. All I'm saying is, that's not always going to be a great ride home.

Like many things in life, just because a relationship is good doesn't mean it doesn't take a hell of a lot of effort. In fact, the effort is the good part. The lovely, wedding day dream that love is enough and you'll always feel perfect and splendid forever is just that – a dream. The day-to-day can be boring and irritating and yet often, in the midst of all it, that's exactly when you feel most deeply at home within each other. And maybe someday, when your mate is at your mom's for Thanksgiving or accepting an Academy Award for best picture, he'll start acting in a way that's weird and makes people uncomfortable. That's when you think, oh, right. That's what I love about him.