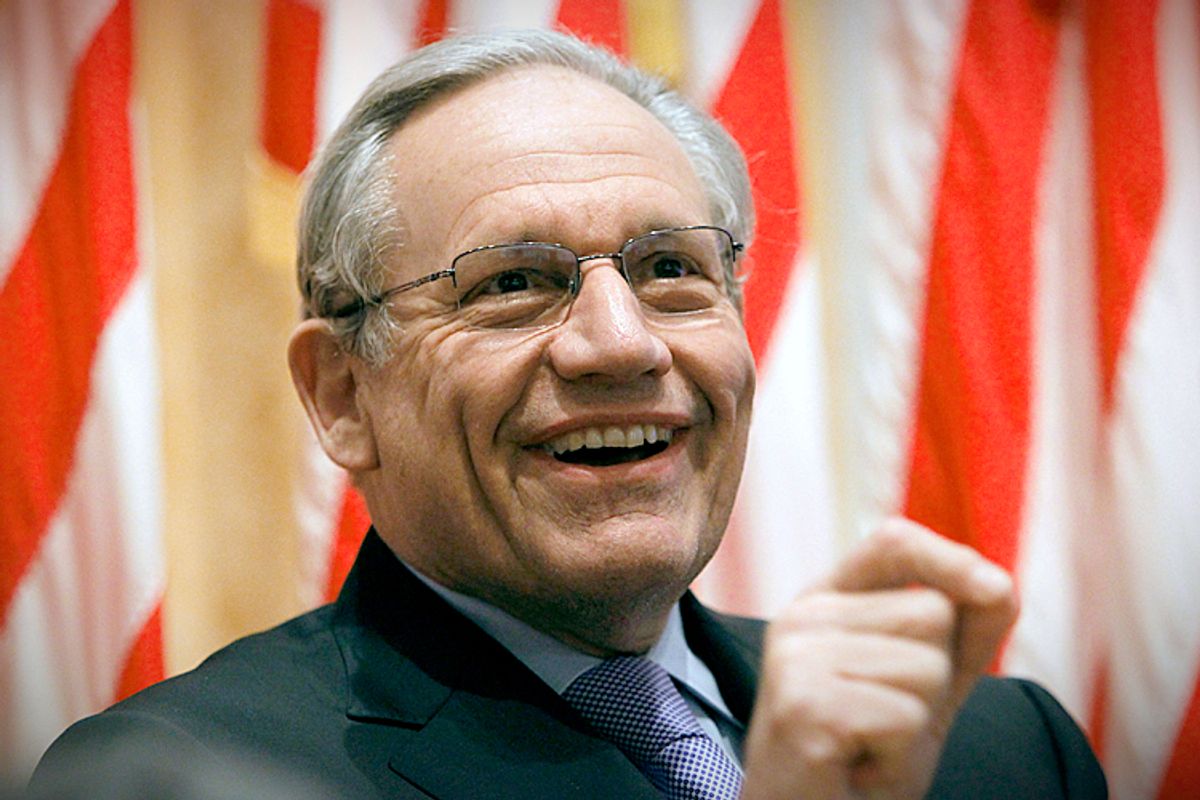 Bob Woodward rocked Washington this weekend with an editorial that hammered President Obama for inventing "the sequester" and then being rude enough to ask that Congress not make us have the sequester. Woodward went on "Morning Joe" this morning, and he continued his brutal assault:

“Can you imagine Ronald Reagan sitting there and saying ‘Oh, by the way, I can’t do this because of some budget document?’” Woodward said Wednesday on MSNBC’s “Morning Joe.”

“Or George W. Bush saying, ‘You know, I’m not going to invade Iraq because I can’t get the aircraft carriers I need’ or even Bill Clinton saying, ‘You know, I’m not going to attack Saddam Hussein’s intelligence headquarters,’ as he did when Clinton was president because of some budget document?” Woodward added. “Under the Constitution, the president is commander-in-chief and employs the force. And so we now have the president going out because of this piece of paper and this agreement, I can’t do what I need to do to protect the country. That’s a kind of madness that I haven’t seen in a long time.”

Speaking of kinds of madness, Woodward's actual position here is insane. As Dave Weigel points out, "some budget document" is a law, passed by Congress and signed by the president. Woodward is saying, why won't the president just ignore the law, because he is the commander in chief, and laws should not apply to him. That is a really interesting perspective, from a man who is famous for his reporting on the extralegal activities of a guy who is considered a very bad president!

Also, that George W. Bush analogy is amazing. It would have been a good thing for him to invade and occupy Iraq without congressional approval? Say what you will about George W. Bush, at least he was really, really devoted to invading Iraq. (And yes the Reagan line, lol.)

There is nothing less important about "the sequester" than the question of whose idea it originally was. So, naturally, that is the question that much of the political press is obsessed with, to the exclusion of almost everything else. Republicans have been making the slightly incoherent argument that a) the sequester, which is a bad thing, is entirely Obama's fault, b) Obama is exaggerating how bad the sequester will be, and c) the sequester, which is Obama's fault, is preferable to not having the sequester. Woodward has lately been fixated on Obama's responsibility for the idea of the sequester, but at this point, the important question is who will be responsible if it actually happens. On that question, Woodward, and others, have taken the position that it will be Obama's fault because he has failed to "show leadership." But laws come from Congress. The president signs or vetoes them. Republicans in the House are unwilling and unable to repeal the law Congress passed creating the sequester. All Obama can do is ask them to pass such a law, and to make the case to the public that they should pass such a law. And Obama has been doing those things, a lot.

Woodward's most recent Obama book also took the position that presidents "should work their will ... on important matters of national business," though how one's will should be worked on a congressional opposition party led by a weak leader and unwilling even to negotiate with the president is never really explained. As Jonathan Chait points out, "use mind control to get your way" is an incredibly popular argument among centrist establishment political reporters and analysts. It is a convenient way of taking a debate where most people agree that one side has a reasonable position and the other side an unreasonable position and making it still something you can blame "both sides" for. Sure, the Republicans are both hapless and fanatical, but the president should make them not be.

Bob Woodward's name is synonymous with Quality Journalism, mostly because of one really good movie. The movie, based on a book that is riddled with exaggeration and misdirection, permanently established Woodward as the best shoe-leather reporter in politics, though his modern reporting style does not put too much of a strain on his Ferragamo loafers: He simply talks to powerful people in his kitchen and then "re-creates" events based on what they tell him. Powerful people talk to Woodward because of his reputation, and because talking to Woodward is the best way to ensure that they come across well in his best-selling books. They talk because they figure if they don't give him a self-serving account of events, someone else will give him a version that makes them look bad. My dream is a Washington where no one talks to Woodward, but until that happens people will continue to pay attention to his biennial book-promoting cable news blitzes and occasional appearances in the pages of the newspaper that continued to pay him a salary -- despite his withholding most of his original reporting from that newspaper -- until quite recently.

In 2010 he said a Hillary Clinton-Joe Biden switch was "on the table," although it was not. He suffered no professional consequences for saying made-up nonsense. Bob Woodward has lost it, let's all stop indulging him.