A group of men with their own tainted records will choose the next pope. Can they rise to the challenge? 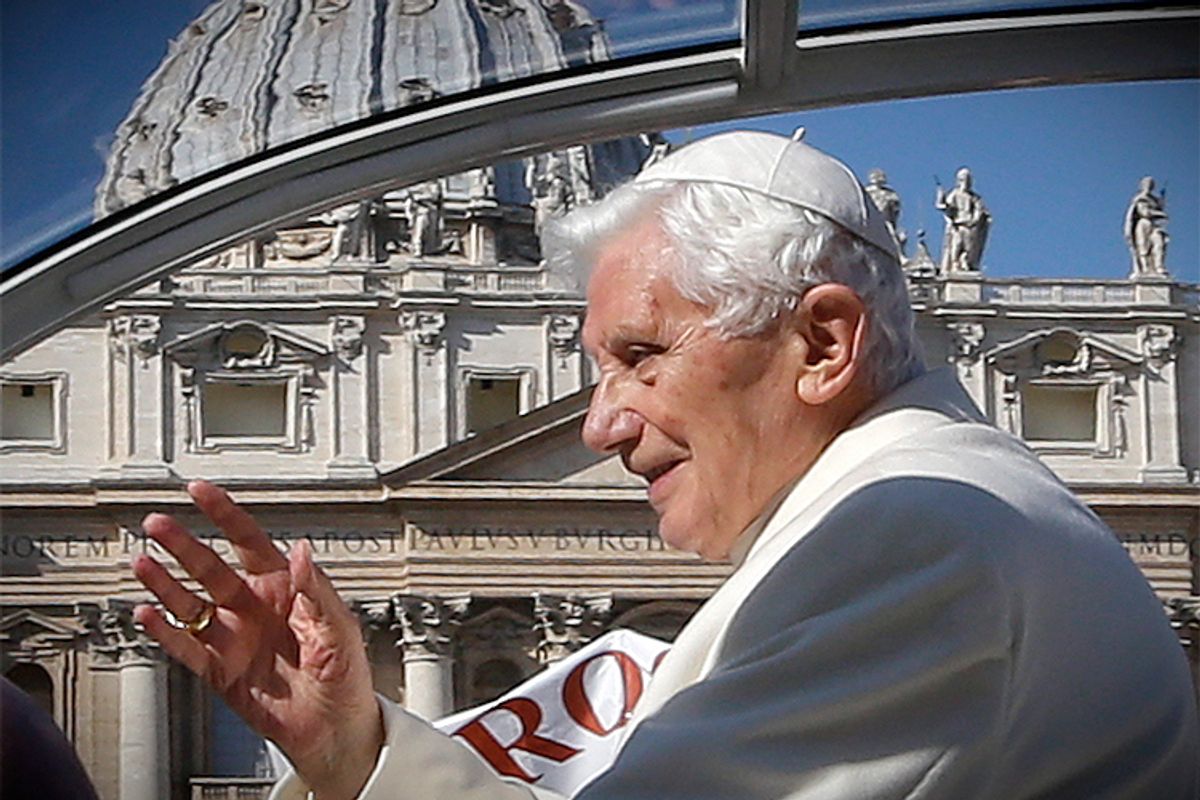 When Pope Benedict XVI finally officially winds down a farewell extravaganza that has in recent days felt like the enthusiasm-testing run-up to the "30 Rock" finale crossed with yet another "last" Rolling Stones tour, a ragtag bunch of men who generally garb themselves in red dresses will assemble to pick their new boss. Would it be too much to ask at this moment: Guys, can you try not to screw this up?

We are at a moment in history when the leadership of the Catholic Church is at once both transparently in need of serious reform and obviously deeply clueless about itself. As the New York Times describes the College of Cardinals, this is one seriously "fallible" group, a gathering of men widely "reviled" for their grotesque behavior – and it doesn't even include Keith O’Brien, who hastily stepped down Monday after reports that he had made inappropriate sexual advances to subordinates. Of course he did. The remaining lot, however, still includes Roger Mahony, the Los Angeles leader who is known for his long and well-documented work in shielding serial abusers from justice; Sean Brady, the Irish leader who refused to resign even after mounting evidence he'd failed to turn over critical information in one of the country's most appalling sex abuse cases; and Francisco Javier Errázuriz, the former archbishop of Santiago who's been accused of covering up abuse and refusing to meet with victims.

You're not exactly a confidence-inspiring group, there, fellas. Sure, you've sometimes said you're sorry. But you still look like a bunch of men who've dug your claws into your cushy jobs-for-life, who are totally out of touch with the real issues that concern not just Roman Catholics but all of us here sharing this planet. Seriously, you look really ridiculous when you're facing a deluge of revelations about your own priests' crimes and then you turn around and give grief to a bunch of nuns who are out there doing the real work of helping the poor and advocating for social justice. You become absurd when you're not speaking out strongly and decisively enough about pregnant women and gays dying because of your hard-line policies, while meanwhile you're hip deep in financial shenanigans. And I honestly don't know if I can explain to you just how ass-backwards you appear when your official mouthpiece is blaming sex abuse scandals on "secularization" and your outgoing leader says that two individuals of the same sex being loving and committed to each other  is destroying the "essence of human nature."

I think Jesus would not be too psyched about your priorities, gentlemen. Remember him? The way the story's been written, he loved outsiders. He loved the poor. He loved people who'd been shamed in their communities. On the other hand, he was not keen on hypocrisy or self-puffery or great empty displays of wealth or muscle. Are you getting where I'm going with this?

So I'd like to ask you all to reach down deep over the next few days. I don't expect you to have any Saul-on-the-road-to-Damascus big moments. I don't imagine you admitting women into the priesthood or officiating at any same-sex marriages or being gung-ho on abortion-on-demand in the next week. But it'd be nice if you could get your collective act together here. It'd be encouraging if you could roll up your fancy sleeves and choose someone with a more evolved sense of what matters. Someone who's a little less blamey of others for the world's problems. Because this is a really, really bad time for finger pointing, OK?

Give us someone of vision, someone who lives in the 21st century with the rest of us. Someone whose ideals don't seem to circle endlessly back to butt-covering. Someone who listens at least as much as he speaks. Someone whose words will be remembered not for what he says he's against, but for what he says he embraces. Who is forceful on the topics we actually give a crap about -- tolerance, peace, compassion. Someone who can understand what it's like to live outside a small, protected and highly self-reinforcing circle. It's for your your own good, I promise. Find yourselves someone who remembers that to be truly Christ-like, you've got to be a troublemaker, a man who bucks the status quo. And who's willing to get in there and give you so-called men of God some hell. We've all earned that much.