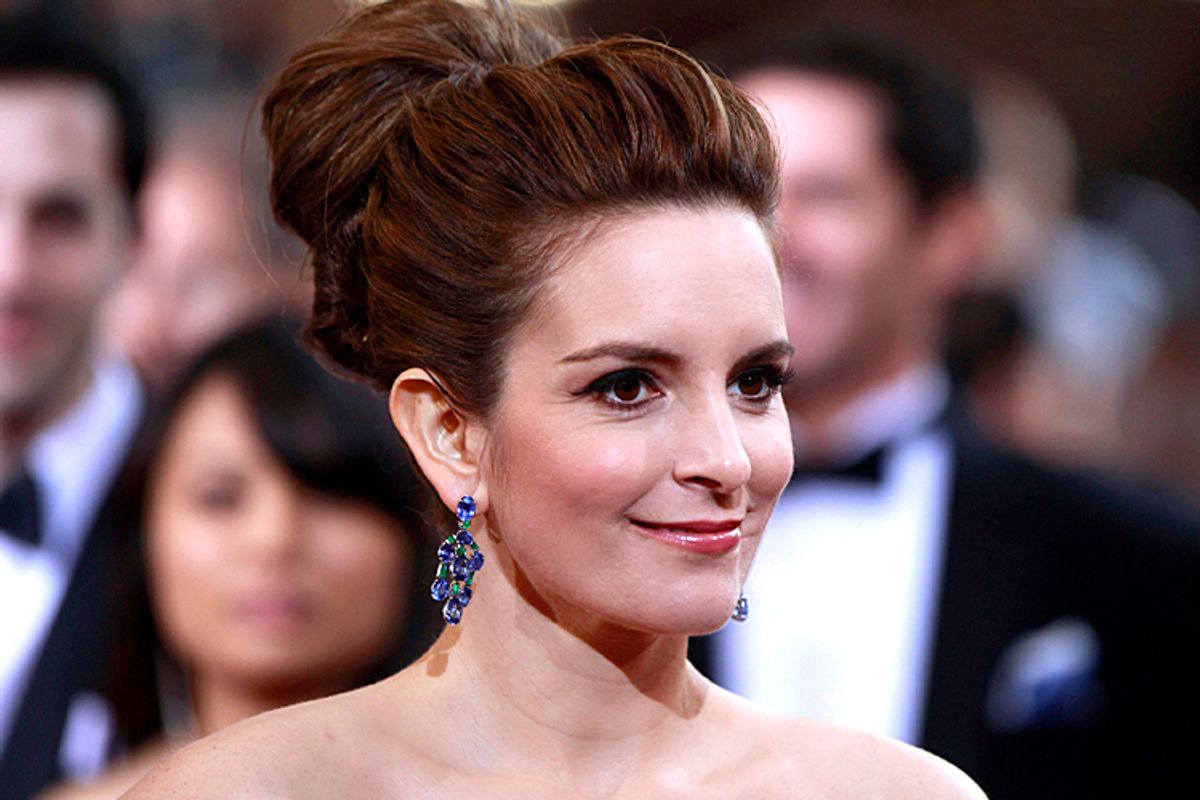 A wise woman once said that women in comedy are labeled "crazy" after a certain age. In a land of "Hangover" franchises and comic book blockbusters, a female on the verge of 43 is not often considered a hot commodity. One whose television series has recently ended would generally be considered a tough sell, lucky to get a steady gig as the flustered mom on another, lesser sitcom, or supporting roles as the wisecracking co-worker in a string of forgettable chick movies. She would not be regarded in savior-like terms. That is, unless she happened to be Tina Fey -- that same woman who said that line about being labeled crazy.

Weeks after "30 Rock" pulled off one of the most memorably satisfying finales in TV history, Tina Fey could easily have slipped into quiet Hollywood middle age by moving more directly into screenwriting and producing. Instead, she is somehow emerging as a more viable, more flat-out necessary star than ever. This month, she's the leading lady in a romantic comedy with über-dreamboat Paul Rudd. Earlier this week, the Hollywood Reporter pegged her as a likely co-star for Jason Bateman in the big-screen adaptation of "This Is Where I Leave You." She's in Europe right now, shooting the new Muppets movie. She is the glossy, gorgeous star of hair-care ads AND a Mark Twain Prize winner AND a best-selling author AND, by her own description, a "stone cold bitch." She has had a crazy successful past few years, but the astonishing thing is that, post-"30 Rock," she looks like she's just getting warmed up.

At a moment in a Hollywood career when a woman is often relegated to what a character in "The First Wives Club" referred to as the "district attorney" phase, Fey has never looked more like a full-on, A-list leading lady. When our Oscars hosts are looking like, to coin a phrase, total boobs, Golden Globes co-host Fey, in contrast, proved herself gracefully both likable and acerbic. Her ad-libbed "Congratulations, Lena, I’m glad we got you through middle school" after losing to the "Girls" star was the apex of hostly perfection, biting yet charming. And as we find ourselves still exhaustedly having to explain why one might take offense at calling a child a vulgar term for the female genitalia, let us pause now to praise the woman who successfully built an entire half-hour episode of a prime-time comedy around that same word.

An essay in vagendamag earlier this week rightly pointed out that male satirists are never called out for not taking their politics seriously enough. In contrast, a woman who is funny is often viewed as a threat to The Cause -- while a woman who is pissed off is regarded as your basic humorless buzzkill. Yet Fey effortlessly rises above it all, a graceful Godzilla of entertainment – a stunningly beautiful leading lady, affable mom who shows up on "Sesame Street," a woman who can make a joke about rape kits.

On "Letterman" this week, Fey showed just how powerful she is right now by groaning at the very notion of taking on the seemingly enviable job of hosting the Oscars – because that would cramp her sweatpants-wearing style. The Oscars? Who needs 'em? Not Tina and her Snuggie. She said this, by the way, while wearing a sparkly, perfect black dress. It's kind of like how she has no TV show and says she's going to spend more time with her family, while currently being one of the most marketable stars in show business right now.

She can write her own ticket, in large part because she's so supernaturally talented. But to all those who say that chicks can't open a movie, or chicks aren't funny, or chicks being political is so not hot, somehow this little missy is sitting right at the top of the heap being all of those things. And when you look at the success of a whole lot of other unconventional women like Mindy Kaling, feminist in a Peter Pan collar Zooey Deschanel, Oscar winner and stair-tripper Jennifer Lawrence, it's easy to see all the ways in which that brash, smart, take-and-like-it-nerds Fey attitude helped pave their path. And when vagendamag urges women to stand up and say, "I am sexy, I am funny, and I am a fucking feminist," Tina Fey's already doing it. For a living. And we couldn't love her for it any more than we do right now.