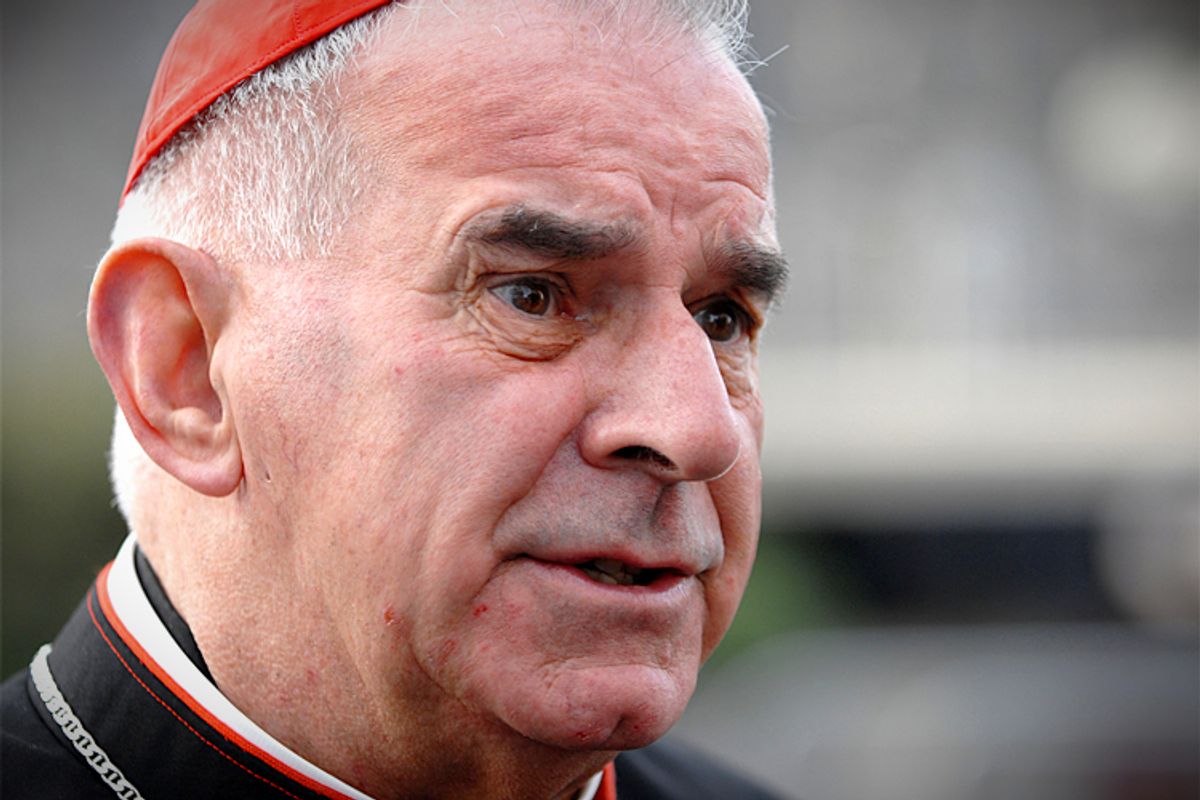 He was a homosexuality-condemning cardinal who is now embroiled in a tale involving his alleged "drunken fumblings" and unwanted advances toward other men. Well, at least this one's a Catholic Church scandal that doesn't involve children. Progress, maybe?

It's been a week since Cardinal Keith O'Brien stepped down as the head of the Catholic Church in Scotland, amid accusations by three priests and one former priest of "inappropriate" contacts with them, some of which dated back 30 years. His resignation spared him the deeper scrutiny that would have ensued had he chosen to go to Rome to choose the next pontiff, a spotlight-shunning optimism he made obvious when he stated, "I do not wish media attention in Rome to be focused on me — but rather on Pope Benedict XVI and his successor." Though O'Brien didn't address the charges in his public statement of resignation, the Scottish Catholic Media Office announced that he "contests these claims and is taking legal advice." He later dismissed "their anonymous and non-specific nature."

But on Sunday, the Cardinal changed his story. The 74-year-old apologized to those he had "offended" and admitted, "There have been times that my sexual conduct has fallen below the standards expected of me as a priest, archbishop and cardinal." He also added, conveniently for him, "I will now spend the rest of my life in retirement. I will play no further part in the public life of the Catholic Church in Scotland."

O'Brien leaves the ministry abashed and under investigation, to be sure, but his future seems considerably less of a hardship for him than for the men who say O'Brien pursued them with "unwanted" advances, who came forward about their encounters with him despite fears that their disclosures "could ruin their lives … if the church disowned them for speaking." One of the men, referred to in news accounts simply as "Lenny," says while he was a seminarian, O'Brien "used bedtime prayers as an opportunity to make advances to his young student." Another, known as "Peter," says he's contemplated suicide in the fallout of his experience.

Whatever the details of O'Brien's actions, they appear to reflect a nauseatingly familiar pattern within the church's ranks – coercion, secrecy and abuse of power. And they reveal the sad and sickening hypocrisy of the men within the church who'd use their influence to attack others and thwart the progress of human rights, all while indulging their own desires. It was exactly one year ago that O'Brien, then the U.K.'s highest-ranking church official, published a fiery condemnation of the "madness" of same-sex unions, and railing against -- no, really -- "the tyranny of tolerance." Because if there's one thing your guy Jesus found totally tyrannical, it'd be tolerance, right, your eminence? In his Op-Ed for the Telegraph, he then went on to refer to marriage equality as "a grotesque subversion of a universally accepted human right" that is "harmful to the physical, mental and spiritual well being of those involved," and to complain that in some schools, homosexuality is now deemed "normal."

The compassionate view would be to try to imagine the boundless self-loathing that would have to exist in a man who could say such things, all while knowing that out there in the world was another man who recalls him "fondling my body, kissing me and telling me how special I was to him and how much he loved me." The merciful view would to be reflect on how painful it must be to be so deeply embedded in an institution that's so ferociously opposed to the version of love he reportedly declared so long ago. Yet it's hard not to shudder at the ambitious bargain he struck on condition of becoming a cardinal, when he had to turn his back on his previous calls for the church to have a "full and open discussion" on issues like celibacy and homosexuality. It's vital to consider all the hurt his actions and his words have caused, over a period spanning decades, and to hope there will be real consequences for his actions.

But as O'Brien now faces a Vatican inquiry into his actions, the journalist who first broke the story of his secrets says the men who accused him are ready to move on. The Observer's Catherine Deveney reports the men already feel vindicated by the cardinal's admission. And, despite everything they've been through, she said Monday that "Forgiveness and redemption are their kind of language."It can't have been easy for them. But that's what's possible when you don't view tolerance as tyranny.