I was bitter. I wanted to sell my own book. And I still want some literary immortality of my own 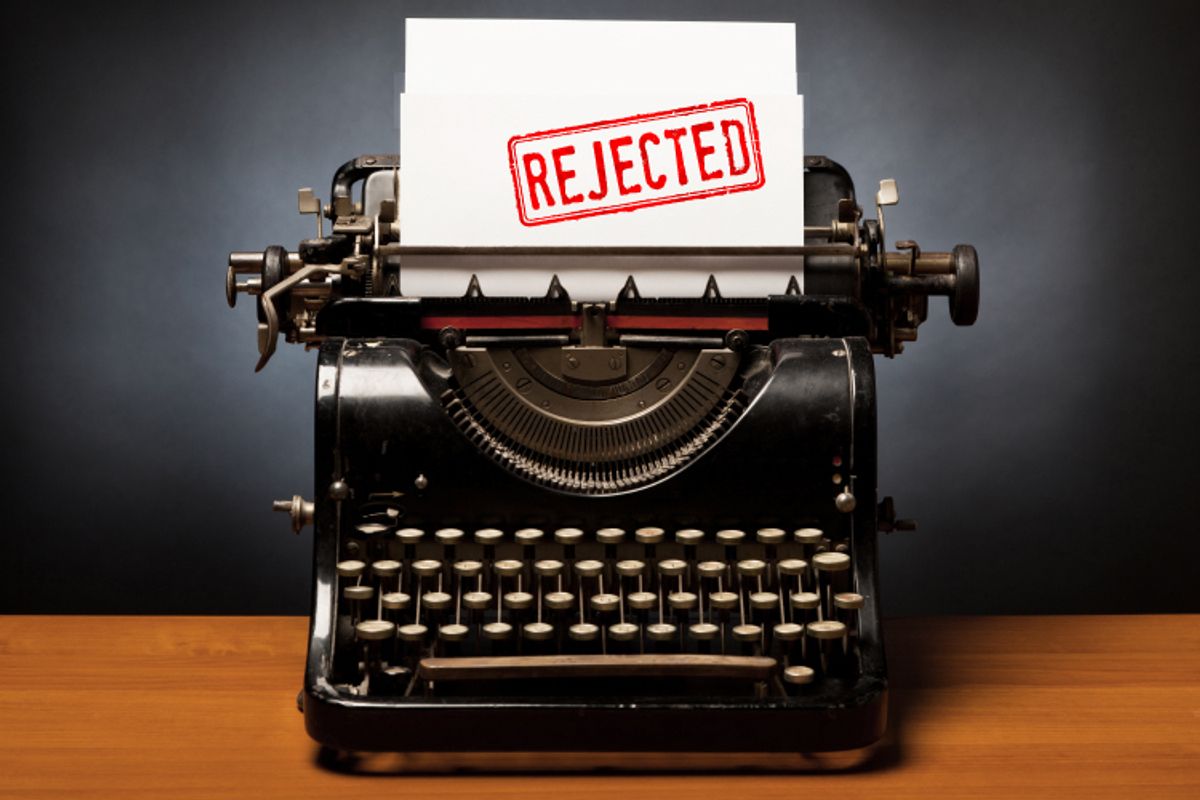 I write. It is what I have always done, searching for what Robert Frost called "a momentary stay against confusion."

But I want more than just wisdom -- every writer does, outside the most hopeless of naïfs. Like most of my fellow scribes, I also yearn for fame, greatness and immortality, preferably in that order. Allow me to be immodest: I would like to write the best thing about Brooklyn since William Styron's "Sophie's Choice" and a campus novel to rival Donna Tartt's "The Secret History." I would also like to write a play and perhaps some poetry, if there is time.

Let me go further: If you do not want your own version of the above, if you are indeed a reasonable and/or responsible young man or woman, then literature is not for you. If you have a compelling personal story to tell, tell it to a therapist. An MBA will do you far more good than an MFA. Pursue writing only if you are pathologically unable to pursue anything else. Otherwise, consider advertising.

William Faulkner once said that the artist is "a creature driven by demons -- he usually doesn't know why they chose him and he's usually too busy to wonder why." The demons chose wisely in his case, yet you and I would be foolish to count on their discretion. I say that as someone who has tried and failed to publish a novel for a good decade, despite efforts that any dispassionate observer would consider impressive, if not outright troubling.

Lest I come off noxiously entitled, let me assure you that I know I should be thankful for a successful career in journalism. Indeed, I am. But the novel for me has always been the very best thing humans can do with words, and words are the very closest we get to God, or whatever numinous presence you think governs our works and days. Thus even the last camp before the summit feels like sea level if you cannot reach the peak.

I've been practicing for the summit since the third grade, when a haiku I wrote was selected for the student newspaper of the Whiting Lane Elementary School. My parents had wisely emigrated from the Soviet Union to suburban Connecticut, where even elementary schools have student newspapers. But alas, Mrs. Schapiro, the froggish creature who taught my class, suspected that a recent immigrant could not have composed such a finely wrought little poem. This being long before the advent of Google, it was impossible to prove that I had not, in fact, plagiarized the haiku. It ran in the newspaper, but without my name. Thus on the cusp of literary greatness, I encountered my first literary failure.

For much of the last decade, my biography in various publications has listed me as "working on" or having "just completed" a "first novel." This is entirely true, but not entirely honest. There has been a Petersburg bildungsroman, a Petersburg-Brooklyn noir novel, something halfway clever about Vermont becoming its own nation, a teaching memoir and, most recently, a teaching noir novel. All are novelistic fetuses in various states of abortion.

Along the way, there was the editor of Nobel and Booker winners who told me she loved the work I had done, which I had delivered by hand to her office above Madison Square Park; one editor told me she liked my emails more than my fiction; a literary agent whose husband is a famously reclusive writer -- we spent an hour in her office talking mostly about Herman Melville; another literary agent, this one who boasted he "never got less than six figures." I am sorry to have lowered his average. He did not sell the book, whichever one it was, and neither did anyone else.

Sure, I know that Henry Miller was 44 when he published his first major work, but I am too pessimistic to hope that I will accomplish in the next decade what I have been unable to in the previous one. Besides, there is something tragicomic in my increasingly desperate attempt to write a great novel -- and why bother writing a novel if it isn't going to be great? -- at precisely the time that literature is facing its greatest devaluation since Gutenberg. A serious writer rows today against the current, whereas I am quite certain that even at his most desperate, some part of Miller knew that he was fornicating and drinking his way to immortality. We, on the other hand, have David Shields saying that “relatively few people care about the novel anymore.” Well, then.

Speaking of rowing: Once, I set out with the Gowanus Dredgers to canoe the filthy canal that winds between the hills of brownstone Brooklyn. I was in a canoe with another woman who, it took us about five minutes of conversation to ascertain, had recently rejected some draft of some "first novel" of mine.

In silence we rowed through fecal matter and oil sludge. Then, slowly, conversation restarted: Look, a cormorant! She meekly offered that a novel about the Gowanus would sell. I haven't quite gotten around to that one yet.

We rowed out to the Upper New York Bay. Here the water was choppier, but our guide urged the several canoes forward into the churlish channel. But then the weather began to sour, too, and some of the more novice canoers became alarmed. The agent made a joke about going down, which I thought would be particularly cruel irony: dying with a woman who had killed my book.

Around this time, my spirits were seriously floundering, too. I had started reviewing books, a dangerous occupation for an aspiring novelist, sort of like inviting an arsonist to join the fire department. As my own rejection letters piled up, it became unbearable to stomach the notion that others -- many of whom seemed, from their biographies, to have sacrificed much less than I had -- were being celebrated while I lurked in the byways of the literary world.

Consequently, the reviews I wrote came to bear a stench of bitterness, none more so than one I wrote for the Village Voice in 2008 in which I took on two debut novelists, Keith Gessen and Nathaniel Rich. After comparing them to James Joyce and Ralph Ellison, I proceed to snidely savage their work. It is true: I did not like their novels. But my dislike was set aflame by jealousy of young men whose profiles were similar to mine and who had managed to do what I had not. I remain more embarrassed by that piece than by any other. Keith, Nate: I am sorry.

Friends smelled my defeat. The eternal question -- "Are you still working on that book?" -- was asked with the solicitude one generally reserves when inquiring about the health of the gravely ill. There was an Ahabic feel to my quest.

The irony of my predicament is that if I could just wean myself off the novel, I would invariably be happier and healthier, a better husband and a better father. But I cannot do it, and not even failure can check me.

I am acutely aware that I am skirting on the swampy edges of self-pity. I mean only to discourage those who secretly want to be discouraged, those for whom writing is a comfortable job or a fun hobby or a way to tenure. The printed word is not ailing because of Kindles or Kardashians but because we haven't the writers to revive it, those for whom Hemingway's edict to write "one true sentence" trumps all else. Either they are discouraged or unloved or pushed out of the marketplace by those whose glossy ephemera looks slightly better on the shelf.

I have no idea if I will harpoon my whale, but even if I am not going to be a writer of books, I am always going to be a reader of them. And thus I want great books, books for our own time, written by those who have staked everything on literature, not just a couple of years in Iowa City. If I am not going to write them, at least someone else should.

By the time Faulkner won the Nobel Prize in 1950, he was largely forgotten, so that the award must have been a cruel reminder of his erstwhile greatness. They had to drag him to Stockholm from the swamps of Mississippi, and though the creator of Yoknapatawpha County went with great reluctance, he delivered the most forceful defense of literature made in the last century:

The young man or woman writing today has forgotten the problems of the human heart in conflict with itself, which alone can make good writing because only that is worth writing about, worth the agony and the sweat ... He writes not of love but of lust, of defeats in which nobody loses anything of value, of victories without hope and, worst of all, without pity or compassion. His griefs grieve on no universal bones, leaving no scars. He writes not of the heart but of the glands.

Take the above passage as a litmus test: If you find it romantic and impractical, you have no business writing. But if you hear the demon that Faulkner heard, if the above passage fills you with urgency about your own craft, however imperfect it may yet be, then you and I are brothers in arms.