If Republicans want to pretend they're for less government, let's force them to get serious about it 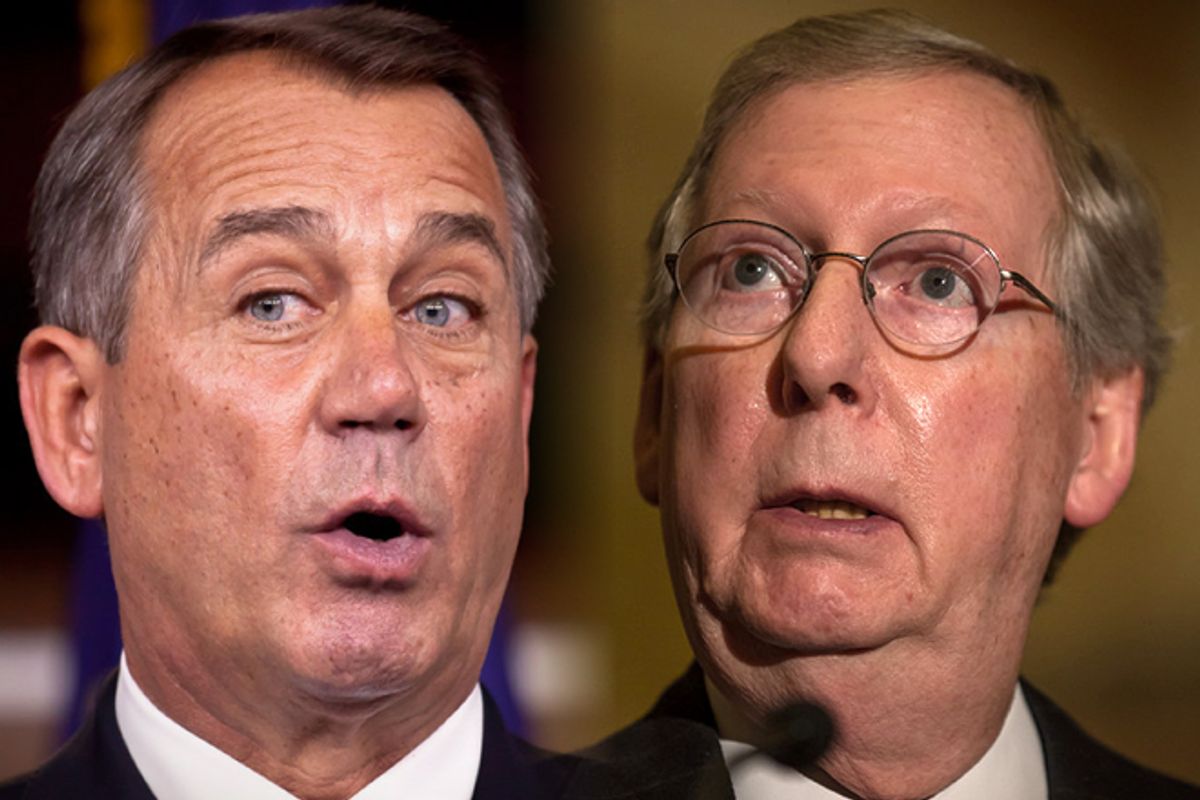 Let's assume that the New York Times was right this week when it asserted that in 2013, "the only issue that truly unites Republicans is a commitment to shrinking the federal government." Even though there's ample evidence that the GOP doesn't actually want to shrink the government, let's nonetheless assume that Republicans are trying to rhetorically brand themselves to the concept of small government, past votes be damned. And let's assume that gerrymandering means the GOP will control at least one house of congress for the remainder of the Obama presidency.

Does that, then, mean the next four years will automatically be mired in stalemate? Not necessarily, if Democrats call Republicans' bluff and use the GOP's small government argument for progressive ends. Indeed, with House Speaker John Boehner showing a penchant for violating the so-called Hastert Rule and allowing transpartisan bills to pass, the "small government" argument could be a perfect instrument for congressional Democrats to pick off just enough Republican votes to pass meaningful legislation in five key areas:

1. Ending - or at least limiting - the Drug War: To know the Drug War has been a disastrous failure at the policy level, take 10 seconds and look at this animated graph. And it hasn't just been any run-of-the-mill policy failure involving unjust incarcerations, negative health consequences and little success in combating drug addiction - it's also been an extremely expensive Huge Government boondoggle. Yes, depending on how you count it, government has spent somewhere between $1 trillion and $1.5 trillion on the Drug War over the last 40 years. According to the conservative Reason magazine, the Drug War now costs about $120 billion a year in direct expenditures. With Republicans showing a willingness to at least entertain questions about America's existing drug policy, the "small government" argument could be the key to ending America's longest war.

2. Reducing the military budget: As recently as last May, Republican leaders were still trying to add money to a defense budget that is already one of the largest in American history. But in just a few months, austerity mania opened up the real possibility that progressives have a chance to achieve their goal of a smaller Pentagon. First, the GOP was split on whether to simply accept the sequestration's Defense Department cuts, and then the GOP officially endorsed those cuts, to the point where senior Republican Sen. John Cornyn is now making the public case that the cuts will not harm America's ability to defend itself.

Cornyn, of course, is absolutely right. Even if the sequestration cuts are fully enacted, the military budget will still be bigger in real dollars than it was throughout much of the Cold War. Thus, unless you want to argue that the nuclear-armed Soviet Union was less of a threat than al Qaeda, or that Ronald Reagan was weak on national security, the numbers mean a Democratic small government argument applied to the Pentagon will not inherently endanger the country.

3. Limiting regressive tax expenditures: Speaking of entitlement programs, economist Jared Bernstein and his colleagues at the Center on Budget and Policy Priorities correctly identify tax expenditures - aka spending programs baked into the tax code - as among most regressive Huge Government entitlements out there (and yes, as this CBPP paper shows, that term "entitlement" is a perfect word to describe them). Even tax expenditures that seem progressive like the home mortgage deduction often end up being regressive in practice. They are also incredibly expensive, costing taxpayers more every year than big-ticket items such as Medicare, Medicaid and Social Security that are often labeled "big government." Limiting these tax expenditures, then, is a perfect "small government" crusade.

4. Limiting agriculture subsidies: The conservative Heritage Foundation criticizes them as "America's largest corporate welfare program." Liberal Robert Reich derides them for "go(ing) mostly to big agribusinesses that hardly need them." I'm talking, of course, about agriculture subsidies, which are projected to cost taxpayers at least $46 billion in the next decade. Not only that, they serve to subsidize unhealthy processed foods, which contribute to an obesity crisis that is driving up health care costs in myriad ways. To Republicans interested in reforming entitlements in the name of "small government," Democrats can hold up agriculture subsidies as an agribusiness entitlement program that should be first on the chopping block.

5. Ending ongoing bank bailouts: Rolling Stone's Matt Taibbi and other economic observers have expertly documented how an alphabet soup of obscure Federal Reserve programs and so-called Quantitative Easing comprises an ongoing taxpayer bailout of the biggest financial institutions. Though many voted for these bailouts, Republicans nonetheless love talking about how their (supposedly) "small government" ideals (supposedly) makes them hate bailouts. With a few shrewd amendments forcing some floor votes in Congress, Democrats could pretty easily expose whether that's actually true.

When I appeared on MSNBC's Up with Chris Hayes this weekend, the assembled panel discussed the consequences of using conservative austerity arguments for progressive objectives. There are certainly upsides to the tactic - after all, there is persuasive power in appropriating an opponent's argument for one's own goals. However, there are also downsides - namely, appropriating the GOP's "small government" argument not-so-subtly affirms the destructive idea that "small government" is always a laudable objective, when it often is not.

Regardless of whether you think the tactical upsides outweigh the downsides, the fact that the "small government" argument could right now be deployed so powerfully for progressive goals means that the next four years aren't necessarily a bust. On the contrary, in light of the five aforementioned possibilities, the current posture of the Republican Party, unto itself, does not mean nothing can get done in the next four years. Democrats could make real progress - if they choose to make a progressive case in such a shrewd fashion.

That, though, assumes they want to make that progress in the first place - which is anything but a safe assumption. After all, many Democrats have loyally voted for the drug war, bigger Pentagon budgets, expanded tax expenditures, huge ag subsidies and massive bank bailouts. But if a few more of them stopped casting those kind of votes, now might be a moment of convergence - a unique moment where the GOP's "small government" desperation combines with progressive movement activism to bring about some much-needed change.