How to think about drones

As Rand Paul's filibuster demonstrated, the drone debate is about more than judging technology 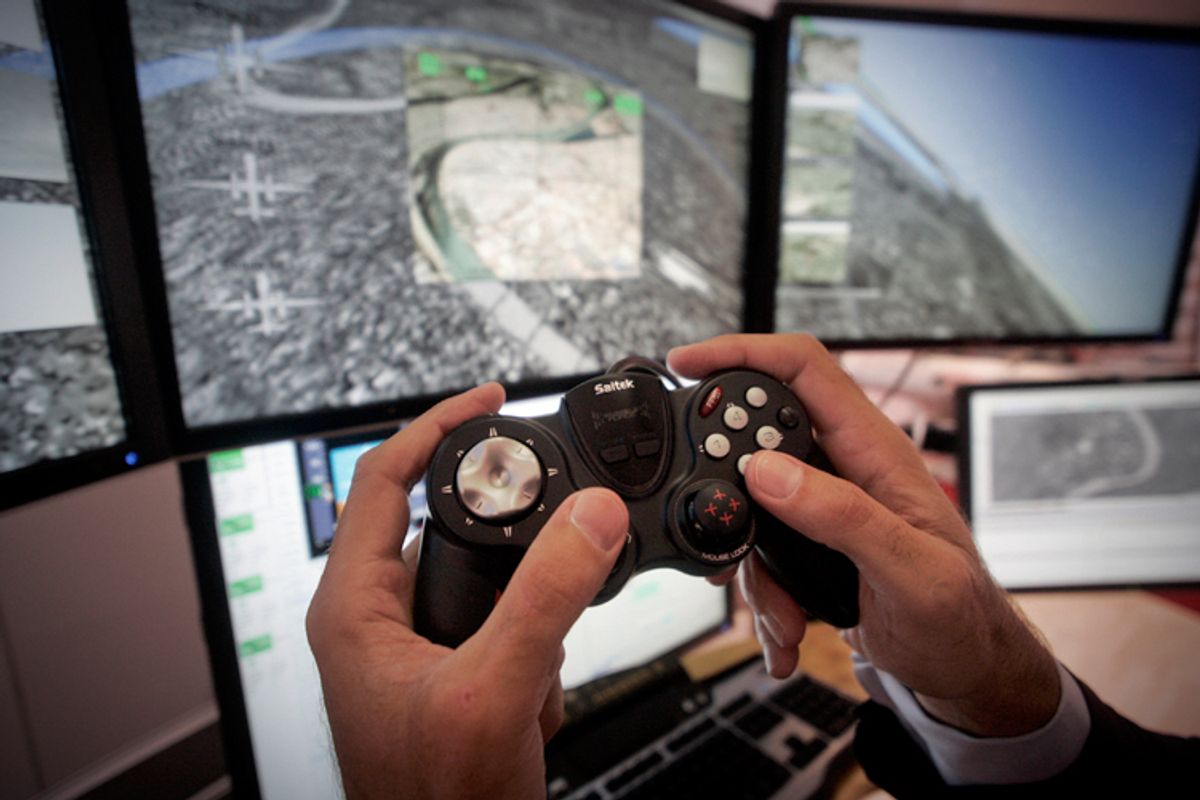 It's not unusual to hear the debate on targeted killings reduced to whether one is "for" or "against" drones. But such a reductive dichotomy over a technology makes little sense and conflates a vortex of issues from executive authority, secrecy, civil liberties, constitutionality and militarism to privacy and personhood. So, what are we really talking about when we talk about drones?

Clearly, we're not just talking about the technology of unmanned flying machines. The fundamental questions concerning the use of drones are about more than this. They are about who can be killed by the U.S. government, where, with what justification and with who else knowing. They are about what activities can be watched by whom and from which skies. They are stories about citizenship and foreignness, property and privacy; they tell of unidentified robots flying near JFK airport and human meat hanging from trees in Southern Yemen.

In short, when we talk about drones we are talking about complex configurations and arrangements of bodies, spaces, objects and subjects. Instead of embracing a knee-jerk polemic that either celebrates or condemns drones, it's important to parse out some of the issues that drone technology has brought to the fore. Then we can ask how it is that drone technology shapes and determines these narratives.

As Sen. Rand Paul, R-Ky., this week filibustered the confirmation of John Brennan as CIA director, the issue of counterterror assassinations seems as good a place as any to start. With the use of weaponized drones, the Obama administration has carried out over 400 strikes in Pakistan, Yemen and Somalia. These attacks have caused, according to calculations from the Bureau of Investigative Journalism, at least 556 civilian killings and at most 1,128. All the while, until last month, Congress had no access to the Justice Department's classified legal opinions justifying the use of drones to carry out targeted kills, including against U.S. citizens. Only as of this week -- prompted by senators threatening to block Brennan's confirmation -- has the White House agreed to show all the Department of Justice drone memos to members of the Senate Intelligence Committee. No other Congress members, legal experts or other members of the public will be permitted access to the documents.

The drone debate in this case has several fulcrums, but falls centrally on the issue of unchecked executive power. But long before airplanes, let alone drones, U.S. presidents have assumed sovereign power -- all that has been necessary is war. It was Lincoln, after all, who famously authorized the chief of the Army to suspend the writ of habeas corpus whenever it was deemed necessary along military lines between Washington and Philadelphia in 1861 in advance of congressional approval. It is in our current époque of permanent war and open-ended imminent threats, codified in the War on Terror, that President Obama's extraordinary executive powers reside. Unchecked executive power as grounded in claims to emergency and war is nothing new in this country and is not the product or fault of drones. Drone technology has, however, enabled a reshaping of war and military lines such that Obama's enactment of sovereign power looks very different from Lincoln's.

As filmmaker Alex Rivera told the New Inquiry last year, "the remote aerial drone can make an invasion into a country not an invasion anymore because no soldiers are going. So we can have drone strikes in countries with whom we have no declared hostilities — not even the casual declarations of recent armed conflicts."  Sen. Paul said in so many words during his filibuster Wednesday, "There's a war going on in Yemen and I don't know how much it has to do with us … We have a war without geographic boundaries." As we saw this month, with only 100 troops and little fanfare, the U.S. established a significant presence in West Africa by setting up one base for Predator drones in Niger.

Writing in the same (excellent) "drone"-themed TNI issue, Maryam Monalisa Gharavi sums up the perturbing state of  U.S.-monopolized drone warfare: "The United states stands behind a one-way mirror playing the most terrifying sovereign role imaginable in a so-called globalized world, watching, calculating, and exacting who will die."

But what constitutes the "United States" in Gharavi's one-way mirror metaphor? It's not U.S. citizens, of course -- they can be struck by drones too. With the use of killer drones, sovereign power is codified in the executive branch only. As leaked Justice Department white papers and comments from the attorney general reveal: The U.S. executive can technically wage drone war not only against Americans abroad, but on U.S. soil too. "Are we the battlefield?" asked Paul during his filibuster. And of course, when technologies of war operate to blur traditional borders and military lines, then everywhere -- U.S. soil and sky too -- can be the battlefield.

Drones permit and accelerate new topographies of warfare, but -- and this is crucial -- they were born of them too. Unmanned aerial vehicles emerged from a context in which U.S. global hegemony was already spreading through globalization -- drones were not the first technology to reconfigure traditional notions of invasion. The Department of Defense, as Nick Paumgarten noted in the New Yorker, "developed a keen interest" in the advent of GPS systems and micro-computing in the mid-'90s. "With the wars in Iraq and Afghanistan, and manhunts in places like Yemen, the military applications, and the corporations devoted to serving them (Lockheed Martin, Northrop Grumman), came to dominate the skyscape. Many of these manufacturers had one client: the Department of Defense," wrote Paumgarten.

There's a temptation to ask whether warfare without drones is preferable. (Would it not, after all, hamper the unchecked executive killing power that drones provide?) But we can't really ask that question -- drone technology is at once both a product and a constitutive element of modern U.S. warfare. There's no undoing that. "War" and "drone war" can't be (even notionally) extricated from each other in this context. So what might be better questions to ask?

Some commentators and, unsurprisingly, Congress members focus on whether the Obama administration's drone program is constitutional -- particularly whether the Constitution should prevent the hypothetical inclusion of U.S. citizens on U.S. soil as potential drone strike targets. What's at stake is not whether weaponized drones can be used over American soil -- they can. All that's necessary (and sufficient) for this to be spun as constitutional, as we've historically seen, is that a situation is deemed an emergency deserving of such executive intervention.

So the questions we have to ask are: What sort of situations get to be "emergencies"; who gets to decide what is or isn't an emergency; who is privy to such decisions; and can they be effectively challenged? As the secrecy surrounding the DOJ memos indicates (alongside the persecution of whistle-blowers like Bradley Manning), we might not like the answers to these questions. Rand Paul asked some of these questions; the Senate progressives made their responses clear.

Troubled by how the president's sovereign power works through military drone technology, U.S. civil liberties advocates are understandably nervous about the proliferation of drones to domestic authorities and institutions. Of course, military technologies passing to domestic law enforcement is nothing new -- just ask the police departments with Bearcat tanks. But the issues at play in the so-called domestic drones debate are different, although not distinct, from those surrounding the Obama administration's targeted killing program.

Central to concerns over the counterterror drone program is the administration's seemingly unfettered ability to choose who lives and who dies. The concerns around domestic drone proliferation center instead on issues on the ever expanding surveillance state. As noted,with the swift proliferation of surveillance drones into the hands of domestic government bodies, the Department of Homeland Security, law enforcement and private corporations, efforts to regulate drone use and protect U.S. citizens’ privacy have spread across the country. A bill with bipartisan support was introduced to the House last month that would require law enforcement to get a search warrant or some other kind of judicial approval for surveillance before using drones to investigate criminal wrongdoing. A Virginia city has also become the first in the U.S. to pass an (albeit symbolic) resolution against the government use of surveillance domestic drones.

There's no stopping the spread of drone technology to police and corporations -- there's too much money to be made. Seventy percent of drone manufacturers are based in the U.S. according to a 2011 study by the global marketing research group Lucintel; total revenue from unmanned aircraft systems is expected to exceed $7 billion over the next decade. But early legislative efforts to control and regulate the proliferation of drones at home tease out what might be at stake.

Drones here are framed in a larger debate, alongside issues of the government's use of warrantless wiretapping, of when privacy can be reasonably expected and protected. Legislation already proposed in Texas suggests that protection of interests in this country when it comes to drones will follow a similar shape: Business interests will, above all, be protected. As I noted earlier this month, the bill introduced by Texas state Rep. Lance Gooden, a Republican, would make it a misdemeanor to take photos with an unmanned aircraft. PopSci explained:

It’s unique because it criminalizes taking any data — photos, sound, temperature, even odor — of private property using an unmanned aircraft without the permission of the property owner. Law enforcement officers could only use drones while executing a search warrant or if they had probable cause to believe someone is committing a felony, and firefighters can only use drones for fighting fire or to rescue a person whose life is “in imminent danger.” Texas’ border-patrolling Predator drones are exempt within 25 miles of the Mexican border.

The legislation was prompted by an incident last year when a hobbyist operating a small drone over public land in Dallas accidentally photographed a meat-packing plant illegally dumping pig blood into the Trinity River, resulting in an EPA indictment. The bill tells us about how domestic drones might neatly map onto preexisting configurations of power and authority in this country. It's an early signal that activists and dissenters hoping to wrest drone technology from its military roots in order to monitor police or corporate malfeasance may face obstacles. The structure of authority already determining who can watch whom and how will not be necessarily overturned by the spread of unmanned aerial vehicles. But the appropriation by activists -- recall the Occucopter in New York, designed by Occupy Wall Street technologists to watch for police brutality -- does highlight that it makes little sense to ask, per se, whether drone surveillance technology is good or bad.

Peter W. Singer of the Brookings Institution has urged that the technology of drones not be conflated with the tactics of their use. Although his sentiment importantly speaks against a facile pro- or anti-drone argument, he's missing something crucial. As Rivera told the New Inquiry, "To Singer, these questions apparently exist in neat boxes: the drone over here, and the ways it’s being used over there. But to me that’s completely false ... Technologies constitute us, they change who we are, what we imagine we can do." A drone is more than just a flying machine -- it's a system, an apparatus that demands and produces subject positions and relations (the pilot, the watcher, the watched, the criminal, the suspect, the sovereign, the dead and more). We are enmeshed and shaped by these arrangements and configurations to the extent that it makes little sense to ask what the "correct way" to use drones might be. Problems of sovereignty, control, privacy and surveillance will not be solved by shouting at robots in the sky.