The Venezuelan socialist and the Kentucky Tea Partyer, semi-united in kooky resistance to American hegemony 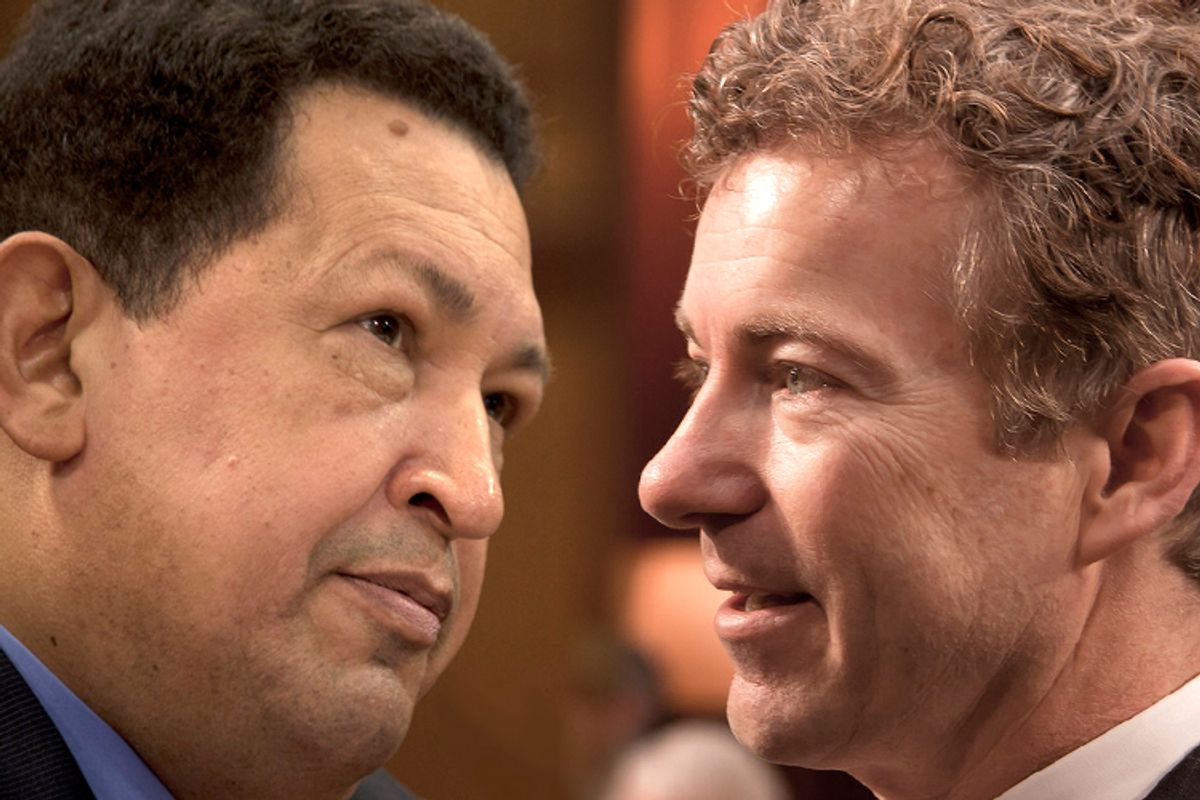 It might sound facetious to draw comparisons between Hugo Chávez and Rand Paul, beyond the fact that they both made headline news this week. They’d have made a great sitcom duo, somewhat in the Harold and Kumar vein: the Latin loudmouth and the unctuous Kentuckian! They bicker endlessly about privatization vs. nationalization and, boy, do things get wild when their respective pals Ahmadinejad and Netanyahu come over! But then comes the heartwarming season-ender when they get baked on decriminalized Mexican sinsemilla, march against United States militarism and chain themselves to the doors of the World Bank! (And don’t you get the feeling they’re both deadly when it comes to the ladies?)

Seriously, though, the tides of history swirl in strange eddies, and the accidental front-page convergence of Paul and Chávez may not be as accidental as all that. Diametrically opposed on many issues as they may be, the Kentucky senator turned quixotic anti-drone filibusterer and the late Venezuelan president who single-handedly renovated socialism for the 21st century made news for essentially the same reason: They stood up on principle against the misguided and ultimately self-destructive imperial-hegemonic role of the United States, and got branded as kooks for doing so. If you want to argue that Chávez really was a kook, or that Paul still is, go ahead. I’m familiar with the evidence, and much of it is tough to refute. But as in Elizabethan drama, it sometimes takes the fool to say things out loud that the king would rather not face.

Furthermore, the climate of kookdom surrounding both men – their orbit of crazy friends, their cult-deity status in certain quarters, their history of troubling utterances – is instructive in itself. It’s as if you have to have a tinge of Joan of Arc nuttiness about you to resist an environment that is genuinely crazy, meaning the totalizing narrative of neoliberal economics and borderless global war that all the normal people with nice friends and nice clothes have agreed to take for granted. Brooklyn College political scientist and author Corey Robin posted this on his blog the other day, and while his sole intention was to rebut the Chávez indictments found all over the mainstream media (and primarily the ones made by Alma Guillermoprieto in the New York Review of Books), much of what he wrote would resonate with Rand Paul:

We live in a country where, depending on which party is in control of the White House, some not insignificant portion of the population thinks it's okay for the president to have the power to order extrajudicial killings simply because … they trust him. They like him. They can imagine having a beer with him. The like his wife. Her bangs, Their daughters. Or any one of a number of possible reasons of the republic. And yet … it is the Venezuelan people who are children, in thrall to a regressive fantasy of their dearly departed leader.

Let’s make a couple of things clear: I’m trying to hold both of these guys at a rhetorical, arm’s-length distance, and any endorsement of them I have to offer is loaded with asterisks. Each is a prodigiously flawed hero and not much of a model for emulation; I’m not sure I would personally vote for either of them for dogcatcher, even if the other candidate were an actual dog. Having said that, I also understand that the parallels between them are limited, and that there’s a huge disparity between them in terms of political and ideological meaning, as well as presumed historical importance. Even in the most hostile account, Chávez was an influential and successful populist leader who reshaped the political landscape of an entire hemisphere, and whose legacy will be felt long after his death. Paul’s story is not yet written, to be sure, but for all his idiosyncratic libertarian views, he belongs to a political party that represents the wealthiest and most powerful interests within American capitalism. In no version of his future career can he declare independence from those interests the way Chávez did.

I can understand why Corey Robin, and NYU professor Greg Grandin in the Nation, and other people I mostly or sometimes respect and admire on the left feel the need to defend Chávez’s legacy against the tide of knee-jerk smug found in much of the mainstream media. Is there anything more obnoxious in contemporary journalism than pseudo-hipster sites like Gawker or BuzzFeed congratulating themselves for the edgy contrarianism of agreeing with Washington orthodoxy? By those standards, the New York Times – no doubt still embarrassed by its blatant cheerleading for the Bush-supported military coup that temporarily ousted Chávez in 2002 – has been relatively restrained in handling the Venezuelan’s demise.

Chávez “brought better living conditions to millions of poor Venezuelans,” a Times editorial guardedly admitted, but “his legacy is stained by the undermining of democratic institutions and the embrace of malevolent foreign leaders” like Ahmadinejad, Libya’s Muammar Gadhafi and Syria’s Bashar al-Assad. One can definitely argue the subtle rhetoric of equivalency here – does hugging the occasional wacko despot outweigh the socioeconomic reshaping of an entire society? – and the vague phrase “democratic institutions” is calculated to conjure up the meme that Chávez’s government was somehow illegitimate, despite his repeated victories in internationally monitored elections.

If the mainstream response to Chávez in general is meant to downplay the hemispheric or global significance of his successful resistance to American power and the supposed truths of neoliberal economics, it still raises thorny problems that the left would be better off not ignoring. My problem with Chávez is less about the guy’s ambiguous record (every political leader has feet of clay) than with the international Oliver Stone-Sean Penn cult of “Chavismo” that declines to discuss his shortcomings. Grandin’s article in the Nation makes an eloquent case that Venezuela under Chávez became far more democratic than ever before, but it never mentions his friendships with Ahmadinejad or Robert Mugabe or Kim Jong-il, or the dire assessment of his record offered by Human Rights Watch. And while I kind of get where Grandin is going when he writes that “the biggest problem Venezuela faced during his rule was not that Chávez was authoritarian but that he wasn’t authoritarian enough” – dude, I’m sorry, but I’m just not following you down that particular shining path.

I grew up in and around the wreckage of the American Old Left – my mother and stepfather were both members of the Communist Party USA – and I’m entirely too familiar with the “Yes, but” arguments launched by leftists in defense of Chairman Mao’s Cultural Revolution, Pol Pot’s Khmer Rouge, the dirt-eating backwardness of Enver Hoxha’s Albania and any other so-called Marxist regime you’re brave enough to remember. No, Chávez was nowhere near that level, and that’s something to be genuinely grateful for. While he imprisoned or drove into exile a smattering of his political opponents, he displayed no appetite for bloodshed and never relied on a secret-police bureaucracy to maintain order. (By most accounts there isn’t much order to be had in Venezuela; Grandin’s call for an iron fist may be a veiled reference to the country’s uncontrolled wave of violent crime.)

I’m not sure why so many left-wingers go all weak in the knees for charismatic ideologues who talk back to Yankee imperialism, almost irrespective of what they actually say and do. I do know that “Yes, but healthcare!” is not an adequate response to questions about Chávez’s weak to nonexistent record on LGBT rights, his propensity for anti-Semitic conspiracy theories or his support for many of the planet’s most despised and tyrannical regimes, presumably in the interests of anti-American solidarity. It reminds me a little too much of standing on the sidewalk outside the Columbia campus in 1980-whatever, while some bearded fellow from the Revolutionary Whatchamajiggers lectured me about how Stalin had been a “genuine revolutionary.” (I can’t say whether Barry Obama, who was briefly my classmate, participated in such discussions, but he could have.) There has to be a way to talk about Chávez’s noteworthy accomplishments and glaring shortcomings – as, I think, Guillermoprieto largely does, or Bhaskar Sunkara does in a fine piece for the British version of Vice – without tumbling into a binary equation where you’re either for world revolution or you’re cleaning Dick Cheney’s tasseled loafers with your tongue.

In fact, when you look at history it’s unfair to suggest that this yearning for a near-perfect political messiah is confined to the far left. In a way, Rand Paul’s quixotic filibuster against now-confirmed CIA chief John Brennan and Corey Robin’s blog post were making the same point: We generally like President Obama, and we feel like his groovy youngish family presents a hopeful vision of America. (The fact that, on most substantive political issues, he has turned out to be a president slightly to the right of Richard Nixon really doesn’t enter into it.) So we’re going to trust him with unprecedented, extra-constitutional power to decide who dies, anywhere in the world, at the push of a button.

Now that we’ve gotten back to Sen. Paul, I’ll throw in the predictable point that once we move away from drones, drugs and overseas military interventions there’s almost nothing I agree with him about. On some philosophical level, it’s probably a good thing for what remains of American democracy if the opposition party includes people who are driven by genuine principle, rather than just being sock puppets full of money. That might describe Paul, but it also might describe Rick Santorum, who’d probably drop a few drones on San Francisco if he could. My colleague Steve Kornacki may well be correct that Paul is also thinking strategically and positioning himself for a 2016 presidential campaign, which isn’t the same thing as saying he’s likely to win it.

Paul is in all likelihood enjoying his one and only moment of across-the-aisle love from the civil-libertarian left, which puts me in mind of the “Halloween coalition” of the Clinton years, when Pat Buchanan joined the Rev. Jesse Jackson and labor leaders to battle the GATT and NAFTA agreements. (That didn’t work either.) Paul opposes the Voting Rights Act, the Americans With Disabilities Act and pretty much all public funds for anything, ever, whereas Hugo Chávez dramatically reduced poverty by nationalizing the oil industry and pouring vast amounts of money into health, education and housing. But they are united forever by one thing: The sober, serious, grown-up policy-wonk center-right of American politics – the Dianne Feinstein-John McCain Republicrat Party -- really hates them. It could have been a beautiful friendship.