The hero-worship of the racist, misogynistic Kentucky senator brings out the worst in certain progressive dudes 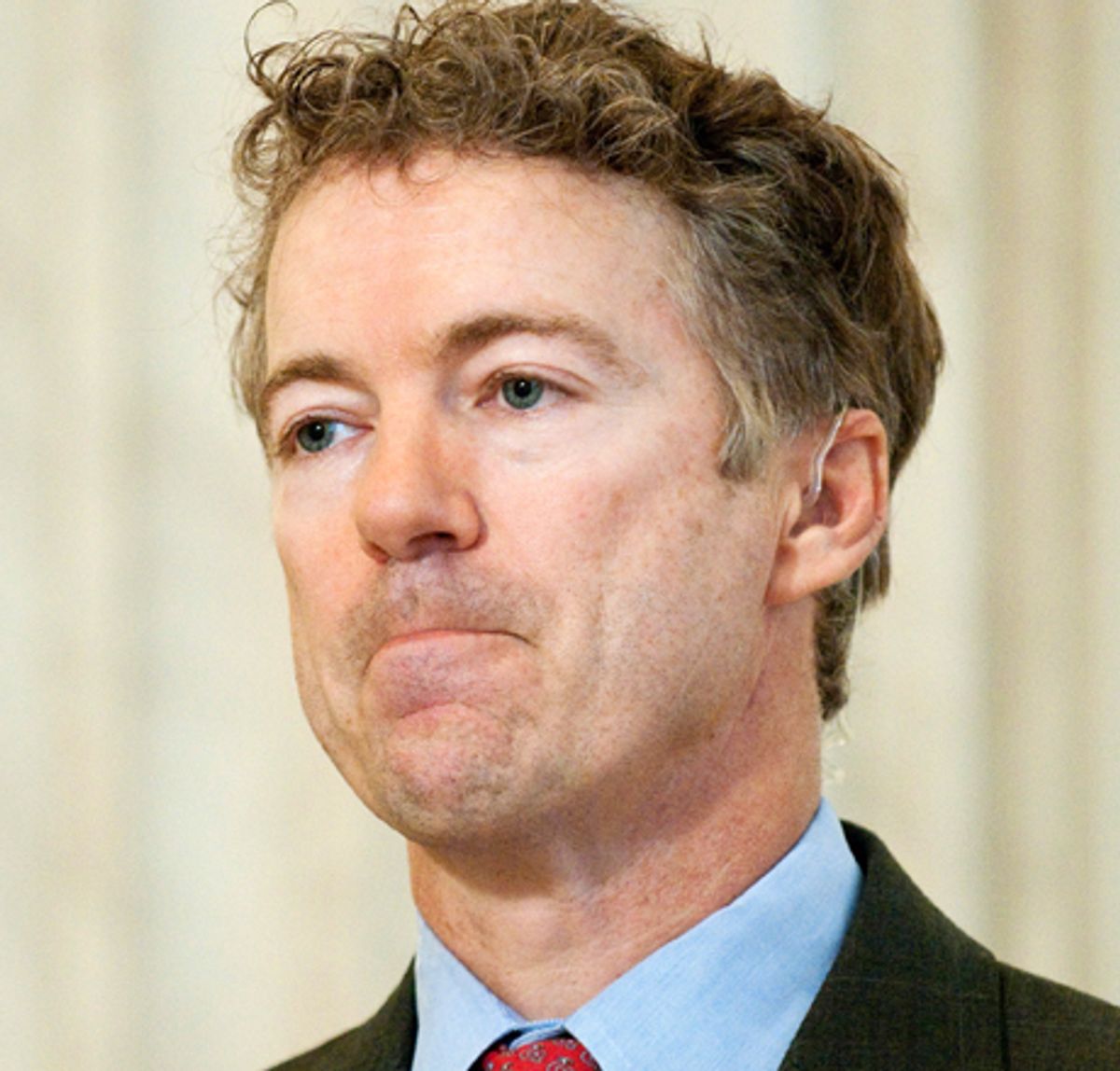 There’s a certain breed of progressive dude who, when told that the object of his latest man-crush is, say, a bit racist (or misogynistic, or is stoking the fears of right-wing preppers), gets really mad. Unable to refute the fact of his worship of the racist, misogynist, prepper-stoker, he resorts to falsifying the intention of the person who pointed out the inconvenient facts. In his latest Salon column, David Sirota proves himself to be just such a dude.

At issue was my AlterNet blog post, published earlier the same day, in which I stated how horrifying it was to see progressives lauding as courageous and “heroic” Sen. Rand Paul, R-Ky., as he took to the Senate floor in a 13-hour “talking filibuster” designed to win him a media tour of top right-wing talk shows (as he signaled his intention to run for the presidency in 2016, which he confirmed to Politico just hours after leaving the Senate floor).

Heroism, by its definition, implies the taking of a risk. But Paul had almost nothing to lose and much to gain from his filibuster, which was born less of passion than careful calculation, according to a National Journal account. As political publicity stunts go, it was an act of genius.

Because part of what Paul had to say about the Obama administration’s policy on drones and the president’s dreadful nomination of John Brennan to lead the CIA comports with progressive opposition to those things, a small but vocal cadre of progressives were slobbering over C-SPAN, tweeting the hashtag, #StandWithRand.

Never mind that to stand with Rand is to stand for a man who sponsored a “fetal personhood” amendment that would “end abortion on demand once and for all,” in Paul’s words, even for rape victims. Try not to notice that to stand with Rand is to exalt a guy who opposes the section of the 1964 Civil Rights Act that desegregated restaurants, lunch counters and housing. He’s also opposed to the Americans With Disabilities Act, preferring the specter of people in wheelchairs barred from full participation in public life to an inconvenient demand on proprietors of establishments otherwise open to the public.

To Sirota, these are issues “unrelated” to the administration’s drone policy, which is, after all, about the civil liberties of all American citizens, especially white survivalist guys (but apparently not so much, in Rand Paul's reading, those of non-citizens). The civil rights of women, black people and the disabled? Well, by Sirota’s lights, they’re “totally unrelated” to civil liberties overall. After all, no skin off his back should those rights go away.

It’s a telling flaw in Sirota’s logic. But the even greater flaw is in the moral character of a writer who all but lies in order to paint another as saying something she did not, and being something she is not.

Paranoia Will Destroy Ya

Apparently in need of a straw-woman to knock down, Sirota draws out of context a few words from my blog post to convince his posse of fan-boys that I was painting them as paranoids for their support of the junior senator from Kentucky.

[Stan] says it is “horrifying to see” principled progressives cheer on Paul’s attempt to force the Obama administration to answer basic questions about civil liberties — horrifying not because Paul is wrong on that issue, but because he’s wrong on other, totally unrelated issues and represents an evil “paranoid base” that dares to fear a government that might soon be “launching drones against them.” (emphasis added)

Here’s how my sentence, from which those phrases are drawn, actually reads:

In his anti-drone filibuster, which admittedly offered C-SPAN viewers an often-enlightening education on the Obama administration’s flouting of the U.S. Constitution in its pursuit of al Qaeda and the Taliban, Paul also played to his paranoid base, suggesting that the U.S. Government was targeting survivalist right-wingers as potential terrorists and might soon be launching drones against them.

And nowhere in my post do I suggest that anyone is evil.

Quashing any doubt that his misrepresentation was unintentional, Sirota follows that up with this:

Setting aside the snide disregard (“paranoid”) for those who don’t like the idea of a violent police state...

That’s Sirota cherry-picking a single adjective from my piece and applying it to a much larger group of people (to which I belong) than those to whom I applied it -- specifically, Rand Paul’s survivalist-minded base. If it is unfair to describe doomsday-preppers as paranoid, I apologize for any hurt feelings.

And it didn’t help that due to a typographical error, the original version of Sirota’s screed appeared to misquote me entirely.

But the more insidious lie is the way in which Sirota, throughout his piece, asserts that any progressive who dares to part company with him in his laughable extolling of Rand Paul as an honorable gent is a “hypocritical” “partisan hack,” and/or “Democratic Party operative.” You’d never know from reading Sirota’s attack on me that in the very first paragraph of my post, I say that Brennan, the CIA nominee, “should be ditched.”

Or that I wrote this in the same post:

Instead of lauding the anti-woman, anti-civil rights neo-libertarian senator, progressives would do better to ask: Why have nearly all the Senate Democrats signed onto the Brennan nomination?

Or that I applauded Paul’s highlighting the “stellar journalism” of two writers who ask “hard questions about the Obama administration’s claim that it has the right to assassinate U.S. citizens -- even on U.S. soil -- in particular circumstances.”

Having no principled defense of his embrace of Rand Paul, Sirota resorts to a false equivalency, a tactic that is typical of his attacks on other progressives. It’s all part of the bro-gressive (h/t Megan Carpentier) culture exemplified by a small group of big-mouthed guys who describe themselves as progressives, but seek to advance their careers through the taunting strategies they learned on the grade-school playground. (So much easier than organizing!)

In an unwitting act of self-parody, Sirota asserts that in not signing on, as he did, to the opening act of Rand Paul’s presidential bid, I commit the equivalent of opposing the kind of deal-making done by Democrats with Republicans in order to pass legislation. I have never opposed compromises between the parties that result in decent legislation.

So where, exactly, is the deal with Democrats that Rand Paul sought to forge in his filibuster? Oh, right -- none was ever intended. So what, then, were Sirota and the bros cheering when they threw in behind Rand Paul?

Sirota contends that people who oppose progressive fawning over the woman-hating Paul “never want to think of themselves as anything but 100 percent pure haters of every single thing a Big Bad Republican stands for” -- as if Rand Paul were typical of the average Republican, and my opposition to his support of Paul’s publicity stunt stems merely from the fact of Paul’s membership in Grand Old Party.

Far more troubling to me than Rand Paul’s place in the GOP is his friendship with the Constitution Party -- the right-wing, political arm of the Christian Reconstructionist movement, whose ultimate aim is to replace the law of the land with the law of the Hebrew Bible (you know, the stoning of adulterers, the execution of gay men, the death sentence for insubordinate children).

In 2009, Rand Paul delivered an address to the Minnesota Constitution Party (as Bruce Wilson first reported here). The following year, Rand suggested to the Christian Broadcasting Network’s David Brody that, if only everyone were as Christian as he, the nation wouldn’t need secular laws, a statement that echoes, as noted by Sarah Posner of Religion Dispatches, the Christian Reconstructionist philosophy. By Sirota’s lights, this is not anything I should be worrying my pretty little head about, even if a progressive love-fest for Paul advances the Kentuckian’s political fortunes. (After all, Paul once proved his ecumenism during a college prank, when he kidnapped a woman, tied her up and demanded that she worship an idol he called “Aqua Buddha.” But I digress.)

Frolicking in the Waters

In Sirota’s reading of events, unless you #StandWithRand, you’re for the administration’s drone policy and against the very notion of a filibuster. That’s not very imaginative for a fellow who, when relaying the quotes of others, is capable of being rather inventive.

What if, instead of #StandingWithRand, progressives were tweeting: “Hey, Elizabeth Warren, what’s your drone policy?” or “Yo, Bernie Sanders, if you oppose Brennan, why aren’t you on the Senate floor?” or “Tammy Baldwin, vote no on Brennan!”?

Granted, not as cool as a rhyming hashtag and everything. And there is surely less fun in pushing senators to accountability than in the hero-worship of a guy who once kidnapped a woman as a prank, a doctor who would rather see a woman dead of a botched abortion than one discarded fetus, a white man who thinks private property trumps equal access to public accommodations for people of all races.

When it comes to Rand Paul, the bro-gressives will brook no obstacle to their frolic in the waters of the Aqua Buddha. But the veneration of Rand Paul reveals the values of those who so adore him.