Was an accused perp in the Indian fatal gang rape case murdered?

A shocking turn in a story that outraged the world 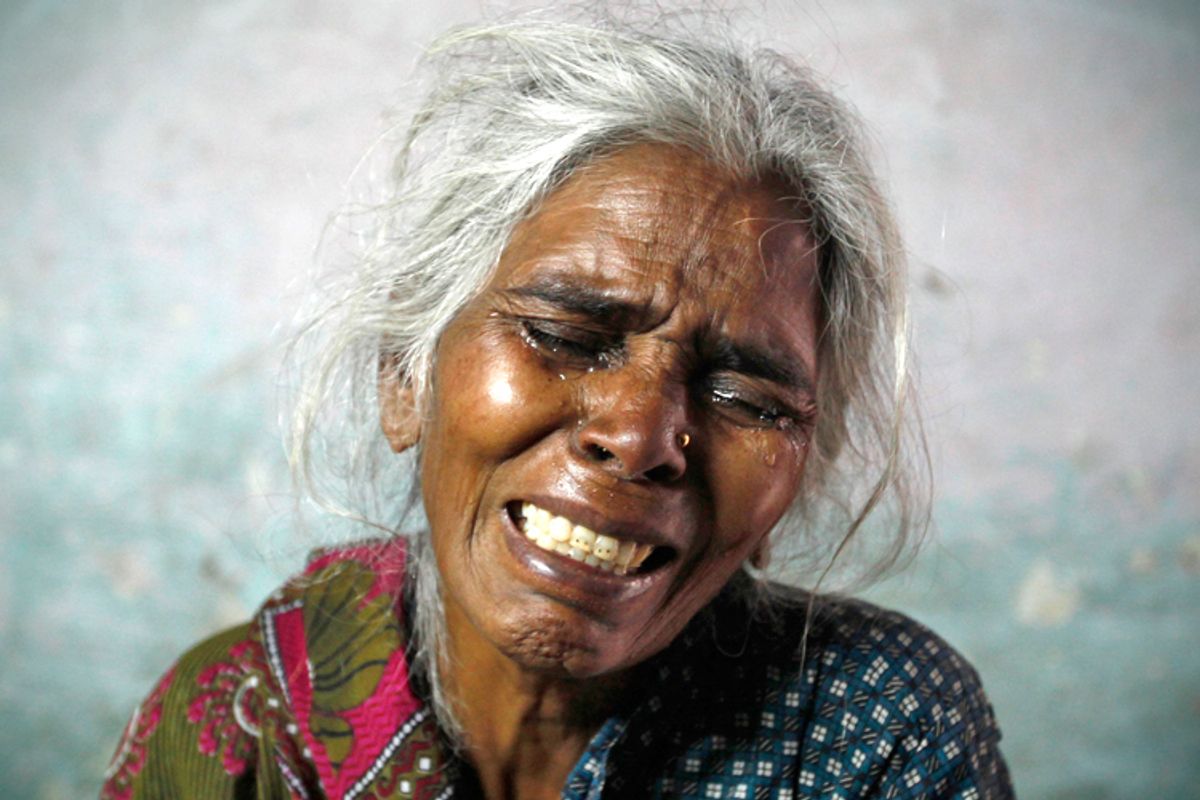 Ram Bai, mother of Ram Singh, the driver of the bus in which a young woman was gang-raped and fatally injured three months ago. (Reuters/Mansi Thapliyal)
--

He was the central suspect in a crime that shocked the world. On Monday, Indian officials announced Ram Singh, the bus driver accused of participating in the brutal beating and gang rape that led to the death of a 23-year-old Delhi woman last December, had been found hanged in his cell at Tihar Jail. Police are calling it a suicide. His family and lawyer are calling it suspicious. And Home Minister Sushilkumar Shinde has shrugged it off as a "lapse in security."

Six males — including one juvenile — have been accused of the horrific attack on the female bus passenger, who was thrown from the bus and died from internal injuries several days later. The crime brought global attention to the pervasiveness of sexual violence in India, and just this past Friday, the victim was posthumously given the International Women of Courage award for speaking out against her attackers even as she lay dying.

Officials told reporters Monday that Singh and his fellow suspects had been on suicide watch, but Rajat Mitra, a clinical psychologist who's worked in the Tihar jail, calls the circumstances of Singh's death "very uncommon," noting, "It's extremely crowded. Even in the night, a lot of people would be awake. I would doubt how he could manage to isolate himself." And his family notes that his preexisting arm injury would have made his ability to hang himself questionable. "He confessed about his mistake, then why would he commit suicide?" his father said Monday. "He was prepared for any punishment the government would have given him. Ram Singh did not commit suicide, he was murdered. He was first murdered and then his clothes were torn off to hang his corpse in his cell."

Could the report of Singh's "suicide watch" have been real? In December, the Press Trust of India reported that another of the suspects, Pawan Gupta, said, "I accept I am guilty, I should be hanged." And the aftermath of violence and the prospect of severe punishment can certainly drive a man to thoughts of self-harm – Singh's death comes on the same day that the BBC is reporting that Olympian Oscar Pistorius is "on the verge of suicide" as he faces murder charges in the shooting of his girlfriend Reeva Steenkamp last month.

Singh has been accused of being the instigator of the crime. Reports have painted him as deliberately going out on the night of the attack looking for someone to target. Now that he will never be brought to trial, his death may solidify that narrative from here on in. Supreme Court lawyer Ravi Kant said to Reuters on Monday that he wondered whether his fellow defendants will have an easier road. "The others accused in this case will now take the opportunity to say that Ram Singh was the main conspirator and they were forced into it and as a result they can get lighter punishments," he said.

And what of the deceased? With two conflicting versions of how he met his end – and the strong possibility of the truth never being uncovered -- what constitutes fairness? Does it even matter? Does the image of his mother wracked with grief over the loss of her son, or the reports that he was "mental" and alcoholic, serve to humanize him in any way? Is the idea of a man possibly driven by the horror of his own actions to kill himself a tragedy of a different kind? Or is there another sickeningly senseless story to be found here -- in the idea of a human being accused of something unfathomably despicable meeting a violent end of his own? Of violence begetting not justice, but just more pain and death?

Based on what is known of Singh, he was a nasty, ill-tempered man, already well known to law enforcement. (His lawyer, however, oddly calls him "very happy.") Yet there's a hollowness to his fate – reflected in Minister Sushilkumar Shinde's calling it just a "lapse" -- as if the death itself were more important than establishing his guilt and letting society mete out a punishment. As if the possibility of the murder of an accused murderer doesn't merit much notice. Even the victim's brother seemed blasé about the news, telling reporters he was "not very thrilled with the news that he killed himself because I wanted him to be hanged ... publicly. Him dying on his own terms seems unfair," but adding, "Oh well, one is down. Hopefully the rest will wait for their death sentence."

There's no justice now in Singh's death, no sense of a truth illuminated and a wrong atoned for. It's true that he will likely not be missed by too many outside of his immediate family. But ultimately, that body found hanged in a jail cell was still that of a person. And his death represents just another senseless, brutal chapter in a story already rife with senseless brutality — an ugly, unsatisfying outcome to a stunning crime.