The QB, who canceled his book tour after being threatened, is a reformed man. What more can he do to prove himself? 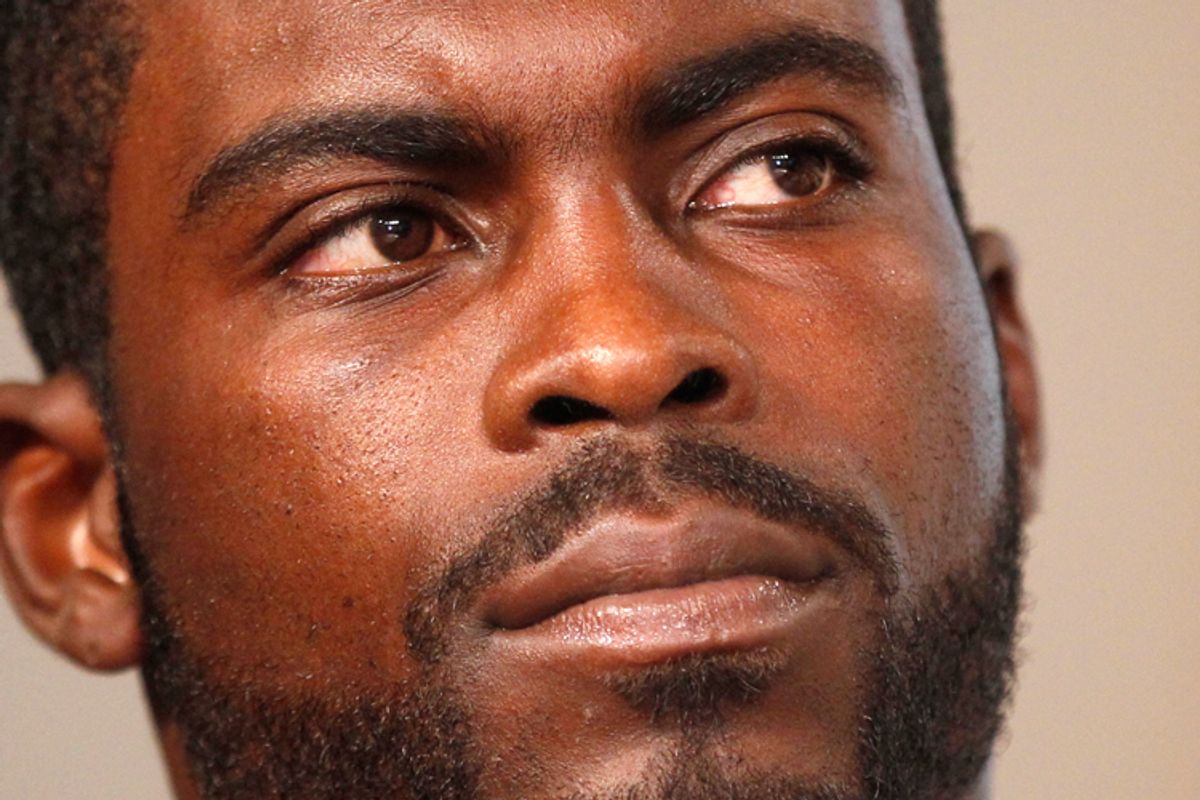 Delete it from your iCal: Philadelphia Eagles quarterback and convicted former animal abuser Michael Vick will not be appearing in a bookstore near you any time soon. His publisher announced this week he has withdrawn from a scheduled book tour due to "credible threats."  Nice grasp of how it works, bullies. Because nothing says I am a compassionate humanitarian who's on the higher moral ground than anybody else like throwing around a few threats of violence.

Vick, who served over a year and a half in prison after pleading guilty in 2007 to felony charges regarding a dogfighting ring, has spent the past six years trying to prove he's a changed man. Since serving his sentence, he's not just gone back to his football career; he's become a volunteer for the Humane Society, speaking out in schools and public events about animal abuse and dogfighting. Last year, his foundation gave $200,000 to renovate a rundown local Philadelphia football field. He even became a dog owner, and when the news of his family's new addition emerged, he announced, "I want to ensure that my children establish a loving bond and treat all of God’s creatures with kindness and respect. Our pet is well cared for and loved as a member of our family. To that end, I will continue to honor my commitment to animal welfare and be an instrument of positive change." And now, he's written a memoir for a Christian book publisher with the hopeful title, "Finally Free" – a tale his publicity materials describe as the story of "how a broken man sought and received forgiveness for his wrongs."

But forgiveness is far more easily sought than received. Vick has long faced the scorn of those who will never, ever forgive him for what happened to those animals. In 2010, PETA's vice president Lisa Lange compared Vick to "convicted pedophiles," and the consensus among Internet commenters still runs heavily along the "rich creep" lines. But this week, things took a darker turn, when his publishers announced, "Despite warnings of planned protests, Vick had hoped to continue with the appearances as planned, bringing his story of redemption and second chance to major markets. However, once the reported protests escalated into threats of violence against the retailers, Worthy Publishing, Vick and his family, decided to cancel the events ... While we stand by Michael Vick’s right to free speech and the retailers' right to free commerce, we cannot knowingly put anyone in harm's way, and therefore we must announce the cancellation of Mr. Vick’s book-signing appearances. We’ve been assured these threats of violence, which have been reported to the police, are being taken very seriously by local authorities." The publisher says the threats were made to Barnes & Noble and an independent bookstore in New Jersey.

As Phillymag reports, the comments on Vick's Facebook page give an indication of the tone: from "I would go there to slit your throat knowing how you treat animals" to "hope your kids don't fall in a pool with a battery" to "I would snap your neck if I met you, your [sic] a piece of trash." Ah, sweet liberating rage. And that's just the random, run-of-the-mill Facebook grossness. Makes you wonder what the threats to the bookstores looked like.

The actions of Vick's dogfighting ring were unconscionable. Vick was a part of a group that maimed, tortured and killed animals – and did it for the thrill of sport. But Vick's behavior was not then and sure as hell is not now an excuse for anybody else to behave like a monster either. One man's misdeeds are not an opportunity to be rude or cruel or say scary things about his children. And there's something truly sickening about the sheer relish Vick's detractors seem to possess, their pleasure in the way that his crimes give them license to be as angry and resentful as they want to be. Gosh, what a convenient outlet.

You think once an abuser, always an abuser? OK. Don't buy his book or go to Eagles games. But don't misdirect all the rage you have at the universe toward the guy. Don't kid yourself that being furious and unforgiving makes you a noble human being. And consider that you don't have to have done time for hurting animals to be abusive. Michael Vick has spent the last several years looking within himself, living with the burden of his actions and trying to change the course of his future. He knows his wrongs. How many of his trolls can say the same?