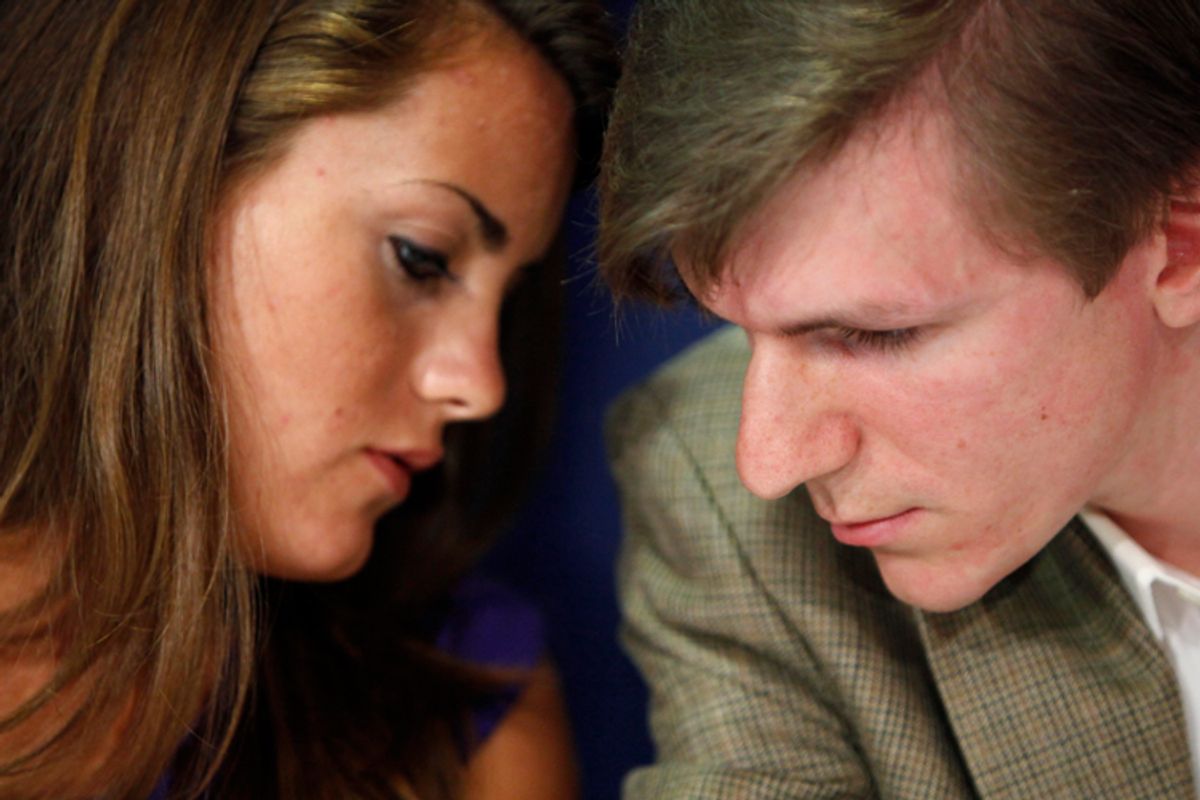 Republican activist Hannah Giles agreed to pay $50,000 to former San Diego ACORN worker Juan Carlos Vera as a part of a legal settlement struck last summer in response to an invasion of privacy lawsuit filed against her and her former partner James O'Keefe, Vera's attorney Eugene Iredale has confirmed to the BRAD BLOG.

Last week, in a scoop by the website Wonkette, it was disclosed that O'Keefe, a federal criminal, agreed to pay $100,000 in his own legal settlement with the same former ACORN employee, after heading up the scheme to secretly videotape him in violation of California's Invasion of Privacy Act (Cal. Penal Code Â§ 632).

O'Keefe and Giles' illicit taping of Vera was carried out as part of the deceptively edited series of hit videos released by the pair in 2009. The tapes were published, and paid for, by the late Andrew Breitbart. Vera had been portrayed in the misleading video as having been willing to help the pair smuggle underage prostitutes into the United States across the Mexican border. In fact, Vera had played along with the duo's proposed scheme only long enough to collect information from O'Keefe and Giles (and take their photographs), before contacting law enforcement immediately after the secretly videotaped meeting.

Giles played the role of a prostitute in the ACORN "pimp" hoax videos. O'Keefe played her boyfriend. O'Keefe did not play the part of a "pimp," as he had knowingly misrepresented in both the videos and to the public, and as repeatedly misreported by the bulk of the mainstream media at the time, and even still today.

Despite the real facts of the Vera case being known since at least April of 2010 -- when a criminal investigation by the California attorney general found "no criminality" by Vera or any of the other ACORN employees seen in the videos -- the original stories on the hoax videos remain published on the Breitbart website without correction, as we noted in our detailed report on O'Keefe's settlement with Vera last week.

As we reported once again at the time, every official law enforcement investigation on the matter -- including those by the former Massachusetts attorney general [PDF], by the Kings County, N.Y., district attorney, and by the California attorney general -- determined that there were no violations of law performed by any ACORN worker as seen in any of the several surreptitiously taped videos. Each official investigation found that the tapes were "highly" and "deceptively" edited to present a false case against ACORN.

O'Keefe had attempted to fight for dismissal of Vera's July 2010 lawsuit but lost in court on every attempt to do so. While it took O'Keefe until this past week to see the writing on the wall and finally agree to settle with Vera, Giles was smart enough to settle her own part of the lawsuit with Vera last summer. Giles' settlement agreement had been reported by Dave Maass of the San Diego City Beat at the time, but the conditions of that settlement and Giles' agreement to pay out $50,000 to the former ACORN worker had not been known.

Asked during his sworn deposition why he didn't attempt to confirm the false story given to him by Vera before publishing his videotapes, O'Keefe, who still purports to be a "journalist," explained: "I did want to follow up. I just didn't end up following up."

After those revelations, it appeared likely that Breitbart might have been pulled into Vera's lawsuit and named as a defendant as well. Moreover, he might have even faced criminal liability in the matter.

For their part, O'Keefe and Giles received criminal immunity from the California attorney general in exchange for providing the office with the previously unreleased, unedited versions of the videotapes. The A.G.'s probe found no violations of the law by ACORN workers, but the report did note that the secret recordings appeared to be in violation of California's Privacy Act. While the immunity deal spared the duo from criminal prosecution for violation of that law in the state, it did not protect them against civil enforcement of the act, such as that brought by Vera. Nor did it protect Breitbart, who, it was discovered through depositions from O'Keefe and Giles in the lawsuit, had prior knowledge of the illicit videotaping at several ACORN offices in California. He could have been charged with a criminal violation of California law, as well as being named as a defendant in Vera's suit.

Vera says that the videotapes, widely promoted by conservative outlets such as Fox News (and many other outlets as well), resulted in his reputation being tarnished. He says he has had difficulty finding work ever since.

"My reputation was in the garbage," he told MSNBC's Ed Schultz last week, adding that while the settlement could be seen as a victory, he felt "sad" because ACORN, which had "very good programs," was put out of business after the O'Keefe/Giles/Breitbart campaign.

ACORN, or the Association of Community Organizations for Reform Now, had been a four-decade-old nationwide nonprofit group dedicated to fighting against predatory lending practices and assisting millions of low- and middle-income American families in obtaining housing loans, as well as participate in their democracy by legally registering to vote. Vera was just one of tens of thousands of employees who lost their jobs as a result of the false attack on the organization, which was forced to shut its door in the wake of the manufactured scandal.

Since news of O'Keefe's settlement with Vera broke last week, he has taken to his website and Twitter in an attempt to claim his innocence, despite the settlement.

He described media coverage of the settlement agreement as "lies and lies and more lies from journafascists" and attempted to taunt the media to "have the guts" to allow him to tell his side of the story. We took him up on that offer and invited him to appear on our KPFK/Pacifica Radio show this Wednesday. O'Keefe has yet to "have the guts" to even respond to our invitation.

UPDATE: During the course of Vera's lawsuit, it was revealed that Breitbart, who died in March of 2012, had agreed to pay the pair some $120,000 for their hoax tapes in $5,000 monthly installments to each. O'Keefe ended up collecting $65,000 before he was terminated around the time of his CNN "Sex Boat" scandal in September of 2010. Giles' payments, on the other hand, were reduced from $5,000 month to $3,000 at some point, before being terminated for what she described, according to Vera's attorney, as "a conflict of visions".

Accordingly, Giles only ended up collecting $32,000 from Breitbart, but thanks to the settlement last Summer, she was forced to hand all of that, plus $18,000 more, over to Vera.