Michelle Obama: Our family is more important than D.C. socializing 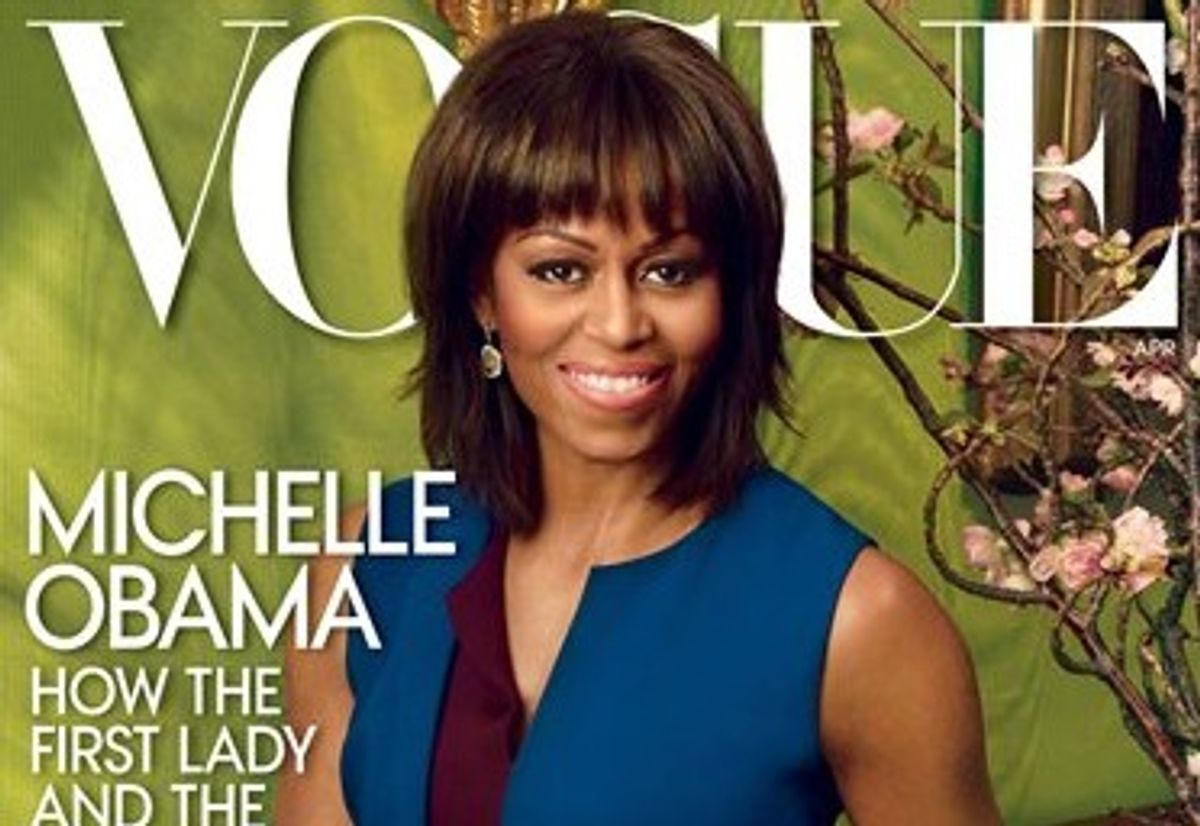 This cover image released by Vogue shows first lady Michelle Obama on the cover of the April 2013 issue of Vogue. The issue is available on newsstands on March 26. (AP Photo/Vogue, nnie Leibovitz) (AP)
--

WASHINGTON (AP) — Michelle Obama is pushing back against the notion that she and President Barack Obama don't socialize enough in Washington.

The first lady says in an interview in the April issue of Vogue magazine that she and the president were straightforward when they said — before moving from Chicago to Washington in 2009 — that their family, including two young daughters, would be their priority.

She said "the stresses and the pressures" of the White House are so real that they prefer to spend free time with their daughters, now 14 and 11.

"Our job is, first and foremost, to make sure our family is whole. You know, we have small kids; they're growing every day. But I think we were both pretty straightforward when we said, 'Our No. 1 priority is making sure that our family is whole,'" Mrs. Obama said in the interview, a copy of which was provided to The Associated Press before the magazine hits newsstands on March 26.

She noted that most of the couple's friends are parents, too, and that when she and the president go on vacation, usually with longtime friends or relatives, they are surrounded by children.

"The stresses and the pressures of this job are so real that when you get a minute, you want to give that extra energy to your 14- and 11-year-old," the first lady said.

The interview, conducted in January shortly after Obama began his second term, was released in the midst of his attempts to do more of what critics say he hasn't done enough of: reaching out to lawmakers, particularly Republicans, he needs to get his agenda through Congress. The list of action items includes legislation to limit access to firearms, overhaul the immigration system and make progress toward deficit reduction, among other issues.

Obama recently had dinner with a group of Republican senators at a hotel near the White House. He followed up by having lunch at the White House with the House Budget Committee chairman, Rep. Paul Ryan, R-Wis., and the panel's top Democrat, Rep. Chris Van Hollen of Maryland.

The president also has been making multiple trips to Capitol Hill this week to meet with the individual party caucuses in both chambers.

He joked in the Vogue interview that he and the first lady might start hitting the town, now that their daughters are older and have less time for them.

"As I joked at a press conference, now that they want less time with us, who knows? Maybe you'll see us out in the clubs," Obama said.

Mrs. Obama added that "90 percent" of what she and the president talk about has to do with the girls: what they're up to, who has practice, which one of their friends is having a birthday party and did they get that person a gift — conversation she described as "endless" and "pretty exhausting."

She suggested that neither one of them wants to miss any of it. Obama grew up without his father and has talked publicly about his desire to be there for his kids.

"He's doing it while still dealing with Syria and health care. He's as up on every friend, every party, every relationship," the first lady said. "And if you're out to dinner every night, you miss those moments where you can check-in and just figure them out when they're ready to share with you."