Is Pope Francis a fraud?

After a right-wing coup crushed the reforms of Vatican II, one scholar says the last two popes are illegitimate 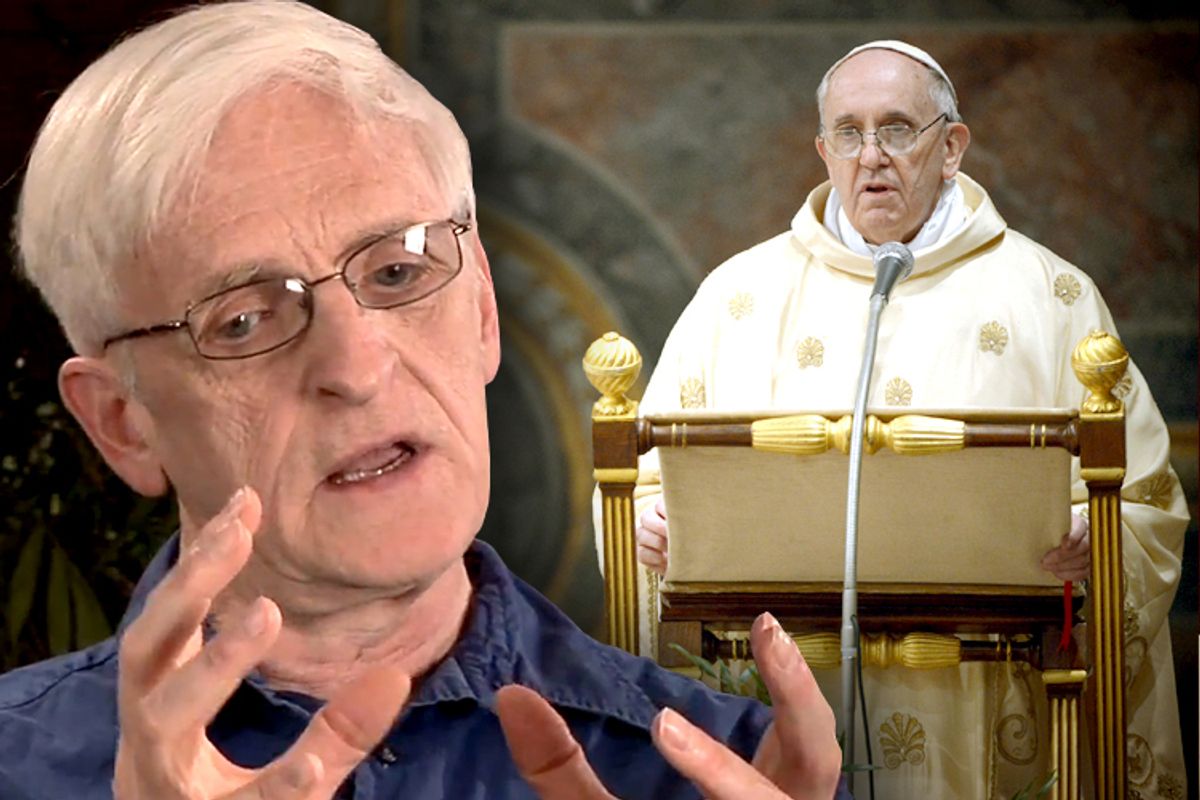 It’s easy — maybe too easy — for people with progressive political views to dismiss the Roman Catholic Church as a vile anachronism, a nightmarish patriarchy of aging pedophiles, woman-haters, homophobes and/or closet cases that can offer nothing of value to the contemporary world. When it comes to the church hierarchy, and especially the Roman Curia, the corrupt and labyrinthine Vatican bureaucracy that makes the Soviet-era Kremlin look like a model of transparency, that point of view seems more than justified.

But the church is not just the hierarchy, and as the spectacle of the last several days has demonstrated, there are millions or billions of people around the world -- Catholics and non-Catholics alike -- who wish the newly elected Pope Francis well and yearn to see in him the possibility of hope and renewal for this ancient, powerful and heavily tarnished institution that claims direct succession from the apostles of Jesus. As the first Latin American pope and the first Jesuit pope, Francis represents a break with tradition in several ways. Both the name he has chosen and his personal modesty and humility are meant to recall St. Francis of Assisi, one of the most adored figures in the Christian tradition, and no doubt also St. Francis de Sales, a 17th-century mystic, author and ascetic known for his devotion to the poor.

But the former Cardinal Jorge Mario Bergoglio emerges from a Jesuit order that has been largely purged of its independent-minded or left-leaning intellectuals, and his reputation at home in Latin America is decidedly mixed. While Francis seems to be an appealing personality in some ways -- albeit one with a shadowy relationship with the former military dictatorship in Argentina, along with a record on gay rights that borders on hate speech -- it’s difficult to imagine that he can or will do anything to arrest the church’s long slide into cultural irrelevance and neo-medieval isolation. His papacy, I suspect, comes near the end of a thousand-year history of the Vatican’s global rise to power, ambiguous flourishing and rapid decline. It also comes after 40 years of internal counterrevolution under the previous two popes, during which a group of hardcore right-wing cardinals have consolidated power in the Curia and stamped out nearly all traces of the 1960s liberal reform agenda of Pope John XXIII and Vatican II. A handful of intellectuals, both inside and outside the church, quietly believe that means Pope Francis isn't a legitimate pope at all.

I’m a “legacy Catholic,” or ancestral Catholic, rather than the genuine article; my parents were both previously married and declined to come crawling back and undergo the necessary humiliation. Then again, as the former Dominican priest, radical theologian and bestselling author Matthew Fox told me in a recent phone conversation, a large number of the 1.2 billion believers the church claims are “disaffiliated Catholics, ex-Catholics, Catholics with one foot in and one foot out.” Like many of those people, I’m not immune to all the emotion and adulation being poured onto the new pope just because I think it’s misplaced. More than anything else, that passion is the enduring, if confusing, legacy of Vatican II, the historic reform council of 1962–65 that promised all sorts of big changes within Catholicism that never quite came to pass.

As Fox and many other Catholic and ex-Catholic dissidents see it, Vatican II marked the moment when the church had the chance to reinvent itself as a flexible moral and spiritual force in a rapidly changing world. Indeed, it briefly seemed to do just that – and it’s important to understand that Bergoglio, like Joseph Ratzinger and Karol Wojtyla before him, was part of the right-wing counterrevolution within the church that aggressively rolled back those changes, crushed dissident thought and reasserted the absolute power of the pope and his hierarchy. Pope Francis is a longtime ally of Communion and Liberation, a fiercely conservative Catholic organization that insists on "total fidelity and communion" with the church leadership and is devoted, among other things, to battling European socialism and Latin American liberation theology. In Italian politics, CL has been closely tied to the party of Silvio Berlusconi, and its founder was an intimate friend of Cardinal Ratzinger before he became Benedict XVI.

If you engaged with the Catholic church in any way between the mid-1960s and the late 1970s, you witnessed the limited effects of Vatican II on the ground: the Mass was in English and could partly be understood (more’s the pity); many dioceses were afflicted with faintly groovy young priests and nuns who played folk guitar; fish was no longer mandatory for Friday night’s dinner (an innovation resisted to this day by many older Catholics). But Vatican II was intended -- at least by Pope John XXIII, who convened it, and the group of theologians who wrote and rewrote its central documents -- to cover a lot more ground than Mrs. Paul’s fish sticks and “Michael, Row the Boat Ashore.”

Vatican II offered the promise of a church that communicated openly with the modern world. It specifically repudiated the church’s history of anti-Semitism and vowed to pursue dialogue with non-Catholics and non-Christians of many stripes. It held out the possibility of a new dogmatic flexibility in which the church would assert the truth of the Christian Gospels while permitting freedom of conscience on a wide range of issues. Millions of learned words have been written on what was and was not addressed or implied in the ambiguous Latin prose crafted by the bishops and scholars of Vatican II, but it might be fair to sum it all up this way: No specific promises were made about changing church policy on priestly celibacy or the role of women or the moral status of homosexuality or the decentralization of Vatican power. But it was implied or understood by many participants and observers that those issues were potentially on the table, and at least you wouldn’t be punished or excommunicated for discussing them.

There was an ideological counterattack against Vatican II almost immediately, with Cardinal Ratzinger as its intellectual leader, and that became the dominant current in the church hierarchy after the ascension of John Paul II in 1978. Fox believes that the last two popes, John Paul II and Benedict XVI, departed so far from both the letter and spirit of Vatican II -- which should have been viewed as the authoritative teachings of the church -- that they should be considered “schismatic,” or illegitimate. “In the Catholic tradition, a council trumps a pope,” he says. “A pope does not trump a council.” (In the great tradition of Catholic intellectuals, he cites precedence in the Council of Constance, convened in 1414, which fired three warring popes and appointed a new one.) “What’s happened since John Paul II is that he and Ratzinger have turned back all the basic principles of Vatican II. I would include the principle of freedom of conscience, the principle that theologians have a right to think. They brought the Inquisition back, there’s no question about it.”

Fox’s 2012 book “The Pope’s War: Why Ratzinger’s Secret Crusade Has Imperiled the Church and How It Can Be Saved” contains a list of 105 prominent Catholic theologians who have been silenced or expelled under the last two popes, including many influential figures of the Vatican II period and its aftermath. Fox himself is on the list; he was silenced by then-Cardinal Ratzinger in 1988 after publishing his New Age-flavored bestseller “The Coming of the Cosmic Christ” and expelled from the Dominican order five years later. (I noted during our conversation that Fox, who is now an Episcopal priest, consistently refers to the most recent pope -- his particular nemesis -- as "Ratzinger" rather than Benedict XVI.) This climate of inquisition, Fox says, “runs totally contrary to the entire attitude and teaching of Vatican II. In the Vatican councils, they defined the church as the people, not as the hierarchy. Under these last two popes, it's all about the hierarchy.”

Fox insists that he’s not alone in believing that the authoritarian reign of the last two popes represents a kind of illegitimate intra-Catholic coup d’état. He says he got the idea from the late Edward Schillebeeckx, a prominent liberal Dutch theologian and Dominican priest who managed to remain inside the church, at a private lunch in the late 1990s. “He told me, 'I and many other European theologians feel that the present papacy' -- that would have been John Paul II -- 'is in schism.' My response was very American. I said immediately, 'What are we gonna do about it?' I'll never forget his look, which without saying anything said, 'These Americans are so crazy. They think you can do something!'”

Fox argues, in essence, that the Schillebeeckx doctrine means the official church no longer exists or, to put it another way, that the power of the church has been diffused and now belongs to everyone. “What it means is that every cardinal, priest and bishop anointed in the last 42 years is illegitimate. What that means to the Catholic in the pew is, ‘Hey, there's no one looking over your shoulder!’ If you're trying to live out the principles of Vatican II, combined of course with the Gospels, that's what the church is. The church is the people.”

That’s a lovely argument – as well as a distinctively Catholic one, I would say – and ex-Catholics and dissidents who already agree with Fox will no doubt find it unassailable. But those Catholics who'd like to go to Mass on Sunday and simply wish the church could be a bit less antiquated and noxious may not find it satisfying. Fox imagines a grassroots-based, decades-long popular uprising within the church, one that would install female priests and openly gay priests and married priests, would reclaim the spirit of Vatican II and ultimately render the repellent and backward hierarchy irrelevant. That’s a lovely idea too, but in the meantime we have the realities of political power, and a new pope with a soft spot for dictatorship and a hatred of gays at the reins of a decaying right-wing junta with especially fancy uniforms. Fox’s friend Schillebeeckx saw this coming more than 20 years ago, when he wrote that many conservatives of the John Paul II era were pushing toward a shrinking, outdated and increasingly isolated “monolith church … a ghetto church, a church of the little flock, the holy remnant.”

When I asked Fox whether he actually held out hope for Pope Francis, he briefly tried to be diplomatic, saying he was praying for the new pontiff and wished him well. Then he said, “But remember that all those cardinals that voted for him were appointed by John Paul II and Ratzinger” – and therefore, from Fox’s point of view, are not legitimate cardinals at all. “They're all cut from the same cloth. Can he break out of that history, that background? That would take a major miracle."