Novelist Barbara Pym comes back into vogue; Cheney mouths off; and we wonder: Is Raylan Givens too trigger happy? 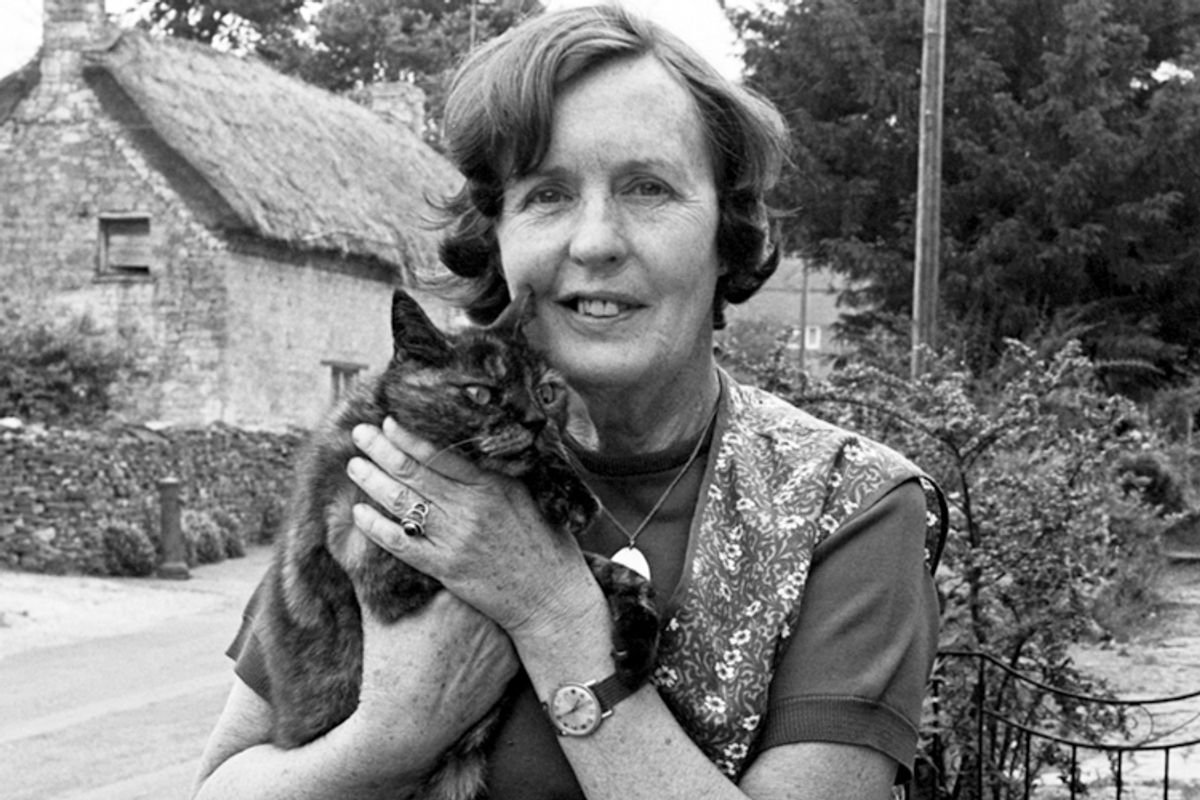 Laura Miller bites into "Paleofantasy: What Evolution Really Tells Us About Sex, Diet, and How We Live," by evolutionary biologist Marlene Zuk, who debunks the myth of the caveman diet:

Why are we so intent on establishing how paleolithic people ate, exercised, coupled up and raised their kids? That’s a question Zuk considers only in passing, but she hits the nail pretty solidly on the head … Even if we wanted to live like cavemen, Zuk points out (noting that the desire to do so somehow never seems to extend to moving into mud huts), we couldn’t. In reality, we don’t have their bodies, and don’t live in their world. Even the animals and plants we eat have changed beyond recognition from their paleolithic ancestors. It turns out we’re stuck being us.

And she relishes the opportunity to reread Barbara Pym's Jane Austen–inspired, post-war comedies of manners, with Open Road Media's reissues of her backlist in ebook form:

The humor in Pym’s fiction arrives, not like the tart thunderbolts issued by "Downton Abbey’s" Maggie Smith, but cumulatively. By the time you are a third of the way into one of her books, a line that would register as only mildly funny out of context becomes hilarious … It’s not just Pym’s deftness in sketching the absurd skills demanded of this ostensibly dignified figure, but the entire, beloved little world invoked by his hard-earned knack. It’s a very dry — you could even say toasted — humor, underlaid by abiding affection and Pym’s Miss Marple–like ability to capture the whole universe of human desire and folly in the doings of a small town.

"Salvador" … has the ability to feel immediately relevant to a new reader whose memory of its context is more the kind of memory that arises from having read books about history than one that arises from having been old enough in 1983 to understand the meaning of phrases such as death squad, or body count, or mechanism of terror … In fine strokes specific to a time and place now seldom considered, Didion has offered a metaphor for the last 68 years of American foreign policy, but the greater tragedy is that what she’s mostly offering isn’t a metaphor at all, but a catalog of real terror and real death in a place that isn’t given the dignity of a full accounting of the real terror and the real death that it is experiencing, but which is, instead, offered up as a representative example of whatever it is that those in power want to say about the ways in which they are exercising their power, whether or not there is a correlation between the facts on the ground and the way they are being interpreted and offered to the audience, which is, I suppose, the American people. Andrew O'Hehir's pick of the week straddles the film-TV hemisphere (it's airing on HBO): "The World According to Dick Cheney," about the mesmerizing hubris of our former vice-president:

There are so many jaw-dropping moments in “The World According to Dick Cheney” that I’m sure to forget several of them. One comes right at the beginning, when interviewer and co-director R.J. Cutler asks the most "consequential" vice-president in American history – that’s Cheney’s word – a series of softball questions to get him warmed up. Cheney looks undeniably older and thinner after his recent heart transplant (talk about jokes that write themselves!), and he does deliver a few minuscule nuggets of warm-and-fuzzy: Happiness is fly-fishing on the Snake River, and misery is the loss of a family member. In case you’ve been wondering, his favorite food is spaghetti. Then Cutler asks Cheney about his biggest flaw. It’s a standard Barbara Walters–style question, for which every skilled politician has a faux-humble answer at the ready. But Dick Cheney is no ordinary politician … He seems genuinely puzzled by the question, which demands at least the pretense of introspection and cannot be answered with "Waterboarding, hell yeah!" Or at least he’s puzzled about what to say, which may not be quite the same thing. He stares into space for a few seconds and then says, "I don’t spend much time thinking about my flaws. I guess that’s the answer."

He was also amused by the sardonic Italian film, "Reality," a "farcical fable of a Neapolitan everyman seduced by the lure of celebrity":

"Reality" makes clear that Matteo Garrone is a filmmaker who can take a familiar story and infuse it with strangeness and vitality. While "Gomorrah" seemed more akin to the big-canvas social and moral criticism of the late Michelangelo Antonioni, "Reality" recalls other models – a little bit Fellini’s "La Dolce Vita," and a whole bunch Martin Scorsese’s "The King of Comedy." Willa Paskin wonders if one of her favorite shows, "Justified," is too glib about violence:

I was bothered by how casually "Justified" wracked up a body count, even though I know "Justified's" willingness to do violence in funny and casual ways reflects what’s great and different about the series. "Justified" is probably the least pretentious best drama on TV. It has a sense of humor in its dialogue and about itself: It’s got jokes and a procedural format, and it’s currently in the midst of a season-long arc about finding a fugitive who appeared to have died jumping out of a plane three decades ago. It’s not the sort of show that often confuses violence for gravitas — if it were, that scissor stabbing of Raylan’s impossible, criminal father, Arlo, would have been the climax of the episode, not the opener … Raylan’s propensity for killing is treated by his colleagues — and the audience and the series — as aggravating, infuriating and cool and adorable. His boss gets worked up every time he kills someone else …  but his suspensions never last too long. It’s hard to stay mad at him, no matter what his body count, and no matter the ever-mounting evidence that his ever-mounting body count is evidence of something deeply troubling and dark inside of him. Anyone who has killed as many people as Raylan Givens has does not have normal-sized demons. "Justified," admirably, has not gotten cheesy about these demons — some men, like Raylan, don’t like to overshare. But that can mean the show, like Raylan, sometimes feels glib: The violence does mean more than Raylan would like us to think it does, but the show often feels like it’s taking his word on the matter.