Are Americans too stupid for democracy?

No, but they could be a lot smarter 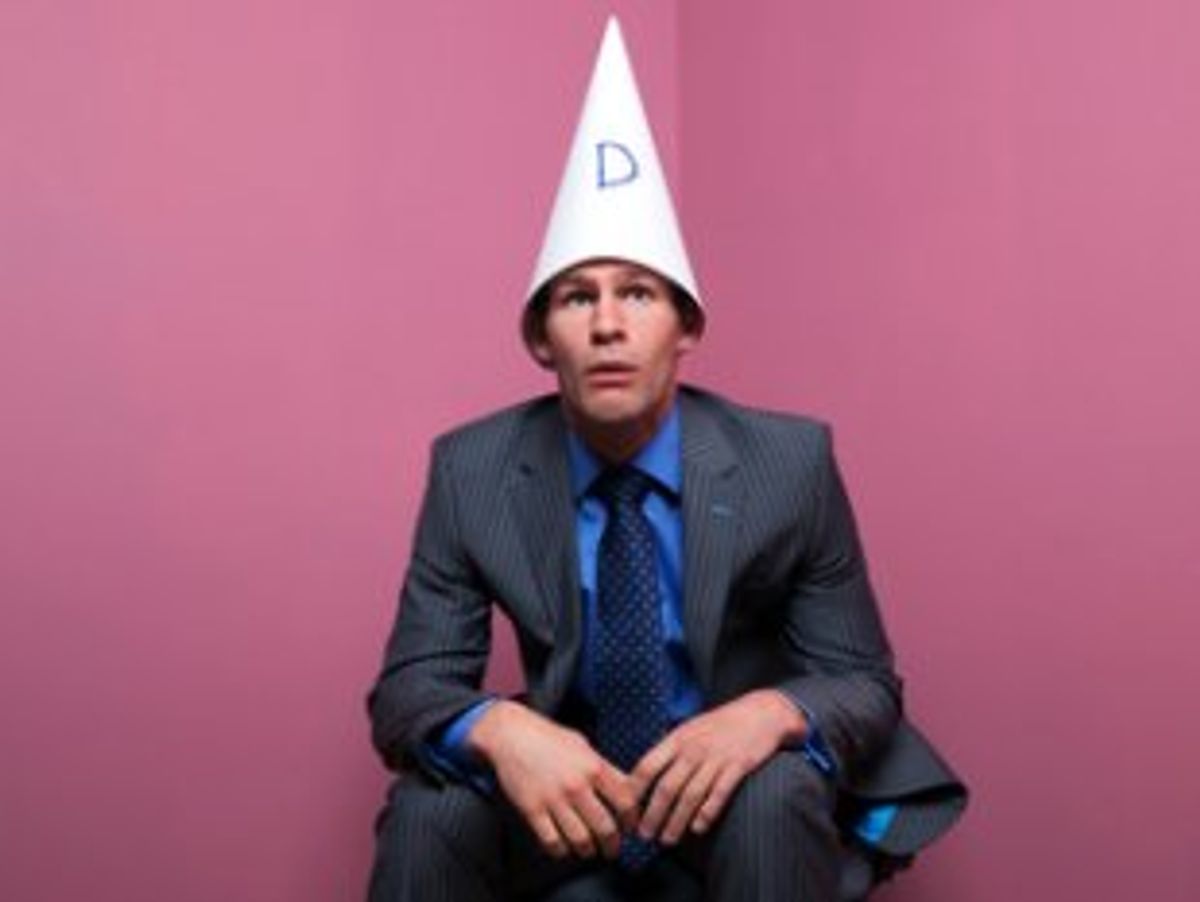 In 2011, Newsweek asked 1,000 Americans to take the standard U.S. Citizenship test, and 38 percent of them failed. One in three couldn't name the vice-president. A 2009 study in the European Journal of Communications looked at how informed citizens of the U.S., UK, Denmark and Finland were of the international news of the day, and the results weren't pretty (PDF).

“Overall,” the scholars wrote, “the Scandinavians emerged as the best informed, averaging 62–67 percent correct responses, the British were relatively close behind with 59 percent, and the Americans lagging in the rear with 40 percent.” We didn't fare much better when it came to domestic stories.

Widespread ignorance of objective reality poses a genuine threat to democracy. The people of the United States have ignorance in abundance.

The way representative democracy is supposed to work is pretty simple: you protect the fundamental rights of the minority (so it doesn't become two wolfs and a lamb voting on what to have for dinner), and then the majority of citizens, acting in their own rational self-interest, elect representatives who will pursue the greatest good for the greatest number of citizens.

That's the theory, but “rational” is a key word in that formulation. What happens when lots of citizens don't have a solid grasp of what's going on in the real world?

Consider some examples that are especially relevant to our current political scene.

People Don't Recognize Their Lack of Competence, Can't Judge the Competence of Politicians

Psychologists David Dunning of Cornell and Justin Kruger of NYU conducted a series of experiments showing that incompetent people vastly overrate their own abilities. "For people at the bottom who are really doing badly — those in the bottom 10th or 15th percentile — they think their work falls in the 60th or 55th percentile, so, above average," Dunning told the website Life's Little Mysteries.

They do just as badly evaluating the competence of others, which poses a problem in a representative democracy. Or, as the Daily Mail put it in typical tabloid fashion, “the theory of democracy has an unfortunate flaw -- that most of the public are just too stupid to pick the right candidate.”

In his mathematical model of the election, he assumed that voters' own leadership skills were distributed on a bell curve — some were really good leaders, some, really bad, but most were mediocre — and that each voter was incapable of recognizing the leadership skills of a political candidate as being better than his or her own.

When such an election was simulated, candidates whose leadership skills were only slightly better than average always won.

It's not just citizens who are out of touch, according to research by David Broockman of the University of California and Christopher Skovron of the University of Michigan. They asked 2,000 state legislators – Republicans and Democrats – to estimate what percentage of their constituents favored same-sex marriage, efforts to combat global warming and universal healthcare. The two scholars found a huge gap between how conservative politicians thought their constituents were and what the polls actually showed. The divide was especially pronounced among Republicans, who overestimated their constituents' rightward tilt by an average of 20 percentage points.

"For perspective, 20 percentage points is roughly the difference in partisanship between California and Alabama," the scholars wrote. "Most politicians appear to believe they are representing constituents who are considerably different than their actual constituents."

The Wealthy Think the Wealthy Should Pay More Taxes, But They Don't Think They're Wealthy

In 2011, Catherine Rampell of the New York Times penned a series of posts showing how confused Americans are about the nation's income distribution and their place in it. “Americans all seem to think they’re 'middle class,'” she wrote, “even those in the top 5 percent of all earners. As a result they frequently misunderstand what political mantras like 'let’s tax the rich' really mean.”

An income of $250,000 per year put them in the top 4 percent of American households – "upper income" by any reasonable estimate.

Americans Like Sweden's Distribution of Wealth, and Think They Already Have It

In a 2011 study published in Perspectives on Psychological Science (PDF), Harvard economist Michael Norton and Dan Ariely, a psychologist at Duke, took a look at Americans' perceptions of how wealth is stratified in this country and what an “ideal” distribution of wealth might look like.

They found that “respondents vastly underestimated the actual level of wealth inequality in the United States, believing that the wealthiest quintile held about 59% of the wealth when the actual number is closer to 84%.”

Perhaps more tellingly, “respondents constructed ideal wealth distributions that were far more equitable than even their erroneously low estimates of the actual distribution, reporting a desire for the top quintile to own just 32% of the wealth.” In Sweden, those in the top one percent held 36 percent of the country's wealth when the study was conducted.

Government Spending Has Decreased Under Obama, But Nobody Knows It

A recent pollconducted by Fox News found that 83 percent of Americans think federal spending is “out of control,” up 21 points since 2009.

But as economist Jared Bernstein notes, federal spending as a share of our economic output (which rose rapidly in 2007 and 2008 because of the crash) has decreased since Obama took office in 2009. Even in terms of dollars spent, rather than the share of our output, it's been essentially flat.

Writing at Forbes, Rick Ungar adds that spending has grown more slowly under Obama than any other administration since... wait for it... Eisenhower. That includes the 2009 stimulus package. (And of course, during his first term, Reagan led the pack in terms of increased federal spending. The younger Bush's second term came in second.)

The Deficit Has Been Stabilized and Is Shrinking, But Only 6 Percent of Americans Know It

According to the Congressional Budget Office, federal deficits projected over the next 10 years have fallen dramatically – by $4.5 trillion – since late 2010. CBO says this year's deficit will work out to $845 billion, the first time it's been under a trillion dollars since 2008. But over that same period, Americans of all political stripes have become more concerned with the deficit, according to Pew.

The age-old conundrum in terms of the public's view of fiscal priorities is that Americans want lower taxes, less government and lower deficits, but oppose cuts to any specific programs other than “defense.”

How does one square that circle? By noting how out of touch most people are with how their tax dollars are spent. A 2011 poll conducted by CNN found that Americans, on average, think we spend 10 percent of the federal budget on foreign aid, and one in five said we spend 30 percent or more helping others abroad. The actual figure: about one percent.

The average American also thinks we spend 5 percent of the budget on public broadcasting, when in fact it's just one tenth of one percent.

According to a 2011 Gallup poll, “Americans on average say that the federal government wastes 51 cents of every tax dollar, the highest level ever recorded since the poll was first taken in 1979.”

Waste is a subjective term, but here's where your dollars go, according to the Center for Budget and Policy Priorities.

So, Should We Just Give Up On Democracy?

Winston Churchill is thought to have said, “Democracy is the worst form of government except for all those other forms that have been tried from time to time.” (He did say it, but he was quoting a predecessor at the time.) The problem isn't the form of government, but the ignorance of our polity. And that's a problem that can be addressed.

The study cited above which found that people in the UK, Denmark and Finland are significantly better informed about the issues of the day noted that some of the differences can be attributed to various models of media funding. The three European countries all have more public television and radio, which the researchers found offered more hard news and analysis, and less puffery.

Education is another big difference. In those countries, spending on education is more or less uniform between schools and school districts. In the U.S., the amount spent on education varies wildly by school, district and state. And while it's in vogue to blame teachers and their unions for what ails our educational system, the reality is that poverty and inequality are the driving forces behind our kids' relatively low educational outcomes.

As Linda Darling-Hammond, a professor of education at Stanford, recently told AlterNet, “students in American schools where fewer than 10 percent of the students live in poverty actually are number one in the world in reading. The place where we really see the negative effects are in the growing number of schools with concentrated poverty, where more than 75 percent of children are poor. The children in those schools score at levels that are near those of developing countries.”