"Splash" dives into the C-list 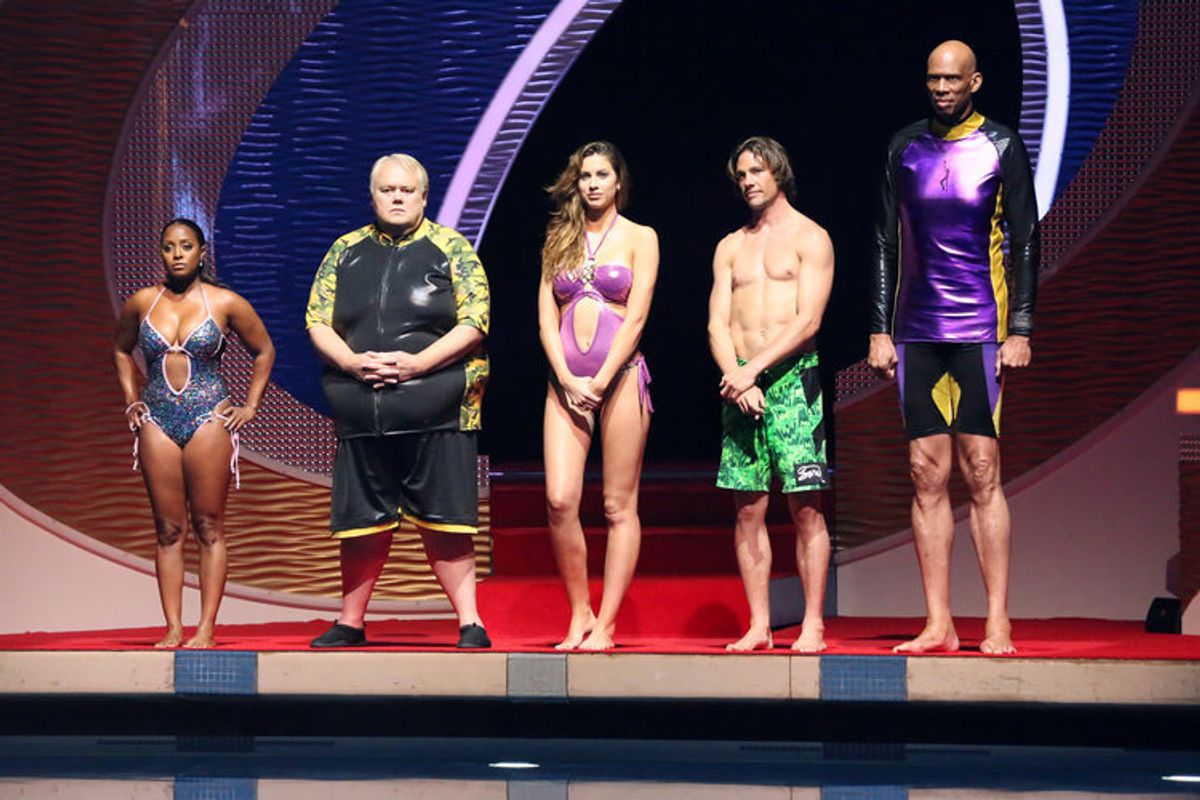 “Splash,” ABC’s new reality series in which moderately famous people jump into a swimming pool — “Dancing With the Stars,” with diving — premiered last night and it is one of the most vertiginous reality TV experiences I’ve experienced in quite some time. Imagine nearly every reality TV cliché you’ve ever seen, some Esther Williams movies, the zany vibe of a Japanese game show, Greg Louganis and belly flops put into a blender, slurried, and poured out into an 8 p.m. time slot on network television. The whole thing barely makes any sense, but the one kind of sense it makes is complete and total: Who would not like to see Kareem Abdul-Jabbar, all 7 feet of him, jump into a swimming pool?

“Splash” is a show about bodies, and particularly irregular bodies in awkward motion. But since “Watch a 400 pound guy splash into a pool!” and “See 'The Cosby Show’s' Rudy wear a keyhole bathing suit!” are crass tag lines, it tries to bury the oogling aspect of its entertainment value underneath a whole lot of crazy, nonsense spectacle and do-gooder justifications.

The crazy, nonsense spectacle aspect was on display from the start: an opening “number” in which a 10-meter diving platform was turned into a red carpet, random divers jumped off it in tuxes and ball gowns, synchronized swimmers synchronized in the pool, other divers were flung out of cannonballs, and the participants were trotted out in multicolored bathrobes while an audience you could barely see made crowd sounds way bigger than their size, the sort of more-is-better display best left to the opening ceremony of the Olympics. It didn't end there. “Splash” is a show where each contestant gets their his or her own theme song (in Keshia Knight Pulliam’s case, one about how “Rudy’s all grown up”) and the series lays down a heartbeat audio-track each time a contestant is about to dive, lest you fail to feel the tension.

The lack of coherence and forced high spirits only escalated from there. Insofar as there are "rules" they’re a mashup of every competition show ever. A coach (Greg Louganis and his tan in the Tim Gunn role), two hosts (Joey Lawrence and Charissa Thomas), some judges (gold medalist David Boudia and USA diving team director Steve Foley) and the audience have all been tasked with pretending that most of the dives they are watching are anything other than really, really terrible. "Splash" makes clear that diving is hard. (Also hard: the work of the makeup team responsible for all the water-resistant mascara.) Of the five "famous” people who dove last night, one, a snowboarder, did anything that looked like professional diving. Three contestants just stood on a platform, pointed their hands at the water and fell in, a feat that was greeted by the judges with varying degrees of respect depending on how high the platform and how fat the contestant.

Really. Louie Anderson, the comedian who weighs 400 pounds, got up on the 23-foot platform and "swan-dived" into the water — i.e.,  put his hands out and fell forward — a feat that the judges could not get over. It speaks to “Splash’s” thematic haphazardness that the talking points of the series are all over the place. The judges seemed to be rewarding the talent for pushing themselves and embracing a healthy lifestyle, "Splash" as a kin of "The Biggest Loser." Knight Pulliam talked about it like a pure competition show, "Splash" as kin to "Survivor." Anderson, in a black and yellow camouflage two-piece, got choked up talking about why he'd jumped from so high. "That’s why I did this …” he started, before host Charissa Thomas finished, “for the troops?” "Splash" as somehow patriotic.

“Splash” was filled with so many moments like this, moments that made it seem more like an "SNL" sketch than anything else. “Which star is going down next?” a host asked. Two contestants were apparently "diving for their lives.” The two women wore the smallest swimsuit that isn't a bikini possible — god forbid a female jumping 23 feet into a pool be given a sensible bathing suit. A much heralded audience vote didn’t matter at all. Knight Pulliam was kicked off after making one of the night's more graceful dives but not from the height of a three-story building. Synchronized swimmers popped up from time to time. Abdul-Jabbar landed on his butt. None of it made much sense — but I can't promise I won't be watching next week, when a very short guy and a very large one give it a go.