Obama is missing the real Israel

Turning away from the military occupation of the West Bank is dangerous for all sides. Here's why 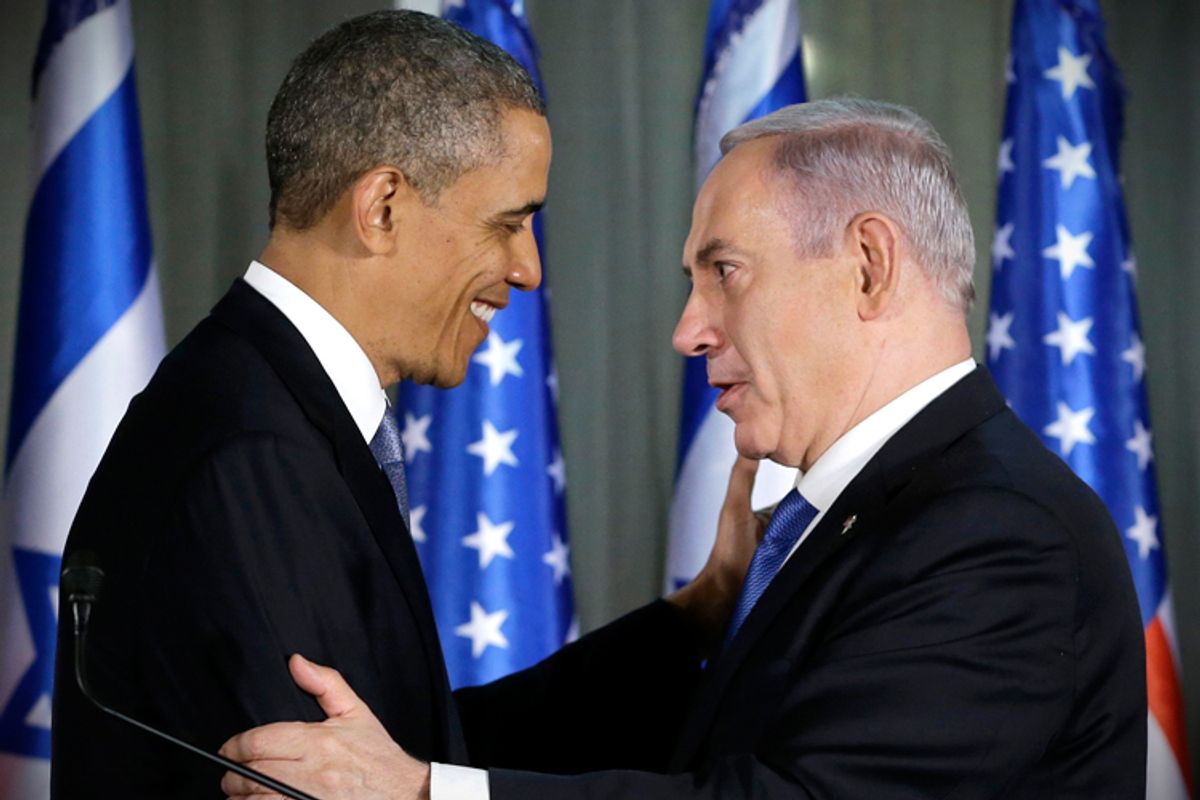 President Obama’s current three-day trip through the Holy Land has gotten much attention, but his visit is notable for what he won’t see, and apparently doesn’t want to. Consider a territory the size of Connecticut, that's been around for nearly 47 years, and holds nearly three million people. It's carved up by hundreds of blockades, barriers, “special security zones,” “closed military areas,” “killing zones,” and roads accessible only to the privileged minority. It features an adult male population where nearly two of every five have been arrested or imprisoned, many without ever being charged. And yet, it remains essentially invisible.

I'm talking about the Occupied West Bank, 60 percent of which remains under the full military control of Israel. You’d be forgiven for not knowing, as references in the U.S. to Israel’s military occupation of the West Bank have fallen out of favor. Dennis Ross, President Clinton’s architect of the Camp David failure, spent a full page in a New York Times op-ed, making “recommendations” for “both sides” in preparation for the president’s visit to the region, without once mentioning the word, or the concept. The Los Angeles Times managed the same feat, in side-by-side op-eds, both by Israelis, including one by a settler who argued for the legitimacy of the West Bank settlements.

I have traveled across the West Bank over the last two decades, and intensively since 2009 for a book about a Palestinian violist and his dream to build a music school in Ramallah. In the South Hebron Hills I met Palestinian children who’ve been stoned by settlers, or had dogs set upon them as they tried to walk three miles to school. There I met a villager who risked arrest by driving his red Toyota pickup down the nearly impassible road to take the children to their classes.  Improvements on the road are forbidden, because it lies in a military zone. A few days later, in apparent punishment, his truck was smashed to a crumpled pulp by the army.

At a place called the Azzun of Darkness, near Qalqilia, I saw the separation barrier rising on three sides, nearly 25 feet high, enclosing the community so tightly that it blocked out light, and contact with the rest of Palestine. At Jayyous, I visited with an old man who told me how that same barrier cut off access to his olive trees, which now lay dying, and to his family on the other side. “My sons don’t know their uncles and aunts,” he told me, sitting beside a bookshelf lined with classics, including The Old Man and the Sea, Anna Karenina, Crime and Punishment, and The Idiot.

In Ramallah I learned of a Israeli military night raid – in a place supposedly under Palestinian autonomy – of the home of Ramzi Aburedwan, director of the music school, Al Kamandjati. He was away, on a special invitation to play for the Queen of Holland, but Celine, his French-Lebanese wife, watched in horror at 2 a.m. as their metal door was yanked off and ten soldiers entered, pointing their M-16s at her while her six-month-old slept in the next room. They had the wrong house, the commander later explained. Soldiers took off three other doors in the apartment building before finding their suspect. Later, at the music school, I met children who told of being forced to pull out their instruments at checkpoints and play for the soldiers. A ten- year-old girl named Alá, a gifted violinist, chose the song Beautiful Girl. And just a few days ago, Oday Khatib, the school’s star singer, was arrested in his refugee camp, Al Fawwar, near Hebron. Reports from there say Oday was protesting the killing of a friend four days earlier. His whereabouts at this writing remain unknown, and his Facebook friends on three continents – including orchestral musicians in the U.K, France and the U.S. – are scrambling to find out the fate of their fellow musician. "God undo his capture, oh Lord," several posted in Arabic.

These few stories are representative of an occupation of Palestine so pervasive that it’s now nearly impossible travel for an entire minute without seeing some evidence of the domination of a stateless people: settlement, military post, flapping flags of Israel, charred stumps of a razed former olive grove, a jeep patrol, a checkpoint, a roadside detention of young Palestinian men.

Most ubiquitous is the daily encounter at checkpoints, a staple of Palestinian life, when families submit to searches and hours-long waits by bored young soldiers at military guardposts flanked by machine gun nests. To some this humiliation, especially of young men who tend to be darker than the soldiers who detain them, is reminiscent of South African apartheid. On a visit to the Holy Land, Archbishop Demond Tutu was reminded of the days “when young white police officers prevented us from moving about.” To Americans it may feel more like the days of Jim Crow.

How did 47 years of such military domination get relegated to footnote status? How, in a region filled with correspondents, have we come to essentially ignore the expropriation of ten percent of the West Bank to build a separation barrier, the razing of hundreds of thousands of olive trees for “security” purposes, regular military sweeps into ostensibly “autonomous” areas, the detention without charge of hundreds of people at a time, the demolishing of thousands of family homes, the sealing off of the Jerusalem holy sites to nearly all West Bankers, except by special permit, and the military control of more than half of their land base? It’s not as though these issues are never covered; but they’re below the radar, aberrations that are not built into the basics of policy or press coverage.

Why? I believe the answer lies in the four-word mantra of U.S. policy and American press coverage of the region: Israelis must feel secure. The statement is true enough, and few people would argue against it, but as exclusive policy and über narrative, those words alone add up to disaster. They are rooted largely in the Holocaust, and the rightful determination of Israelis and Jews around the world to “never again go like sheep to the slaughter.” But their application as essence of policy and coverage amounts to a kind of Leon Uris Exodus narrative, which praises the rising of Israel out of the Holocaust’s ashes, but ignores or villifies the other people who paid the price. Seven hundred fifty thousand Palestinians fled or were driven out of their homes during the creation of Israel; their dispossession ripples forward into today’s occupied land, and the dream of freedom that still lives within it.

Occupation and freedom: These concepts are just as legitimate for consideration and action as is any Israeli’s right to feel secure. For a just and comprehensive peace, these ideas need to share equal status. Yet the notion of occupation is increasingly ignored by the American press as some quaint remnant of a revolutionary past. More important, the corrosive nature of the occupation, and the struggle of a people to free itself from it, has been essentially dropped as policy issues by successive American administrations eager to speak, as President Obama did Wednesday, of the “eternal” American bond with Israel. The irony is that by refusing to publicly confront the occupation, and meaningfully back the Palestinian quest for freedom – instead of blocking it at the United Nations – the Obama administration is undermining the Israeli security goal at the center of its policy. Permanent occupation in reservation-style enclaves is not a long term answer for Israel and Palestine, and in the end it will not make Israelis feel secure.

On Thursday President Obama is spending a few hours of his three-day Mideast visit in Ramallah and its environs. In his bulletproof caravan, he’ll be whisked through a VIP checkpoint, thus missing the opportunity to see the vast border crossing at Qalandia, with its mind-numbing rows of metal gates and turnstiles. He won’t see the humiliation of Palestinians at the hundreds of other checkpoints, roadblocks, and barriers. He won’t likely visit with any residents of Area C, representing the 60 percent of the West Bank under full Israeli control, where even small improvements on homes are forbidden, lest Israeli bulldozers arrive to demolish them. And according to reports, the president has declined to meet with the families of prisoners, including many who languish in jail, unaware if a charge will ever be filed.

Instead the president will visit with the West Bank Palestinian leadership, largely discredited for its failure – abetted by the Americans – to deliver on a long promised independent state. Few Palestinians seem to be expecting very much, least of all on any American movement to end the long occupation. Yes, the president offered the familiar lukewarm American diplo-speak about how the settlements do not advance "the cause of peace." But there's little expectation of strong language to confront the reality of the Palestinians' Kafkaesque predicament. The president will, however, find it difficult not to be reminded of it from time to time.

On Thursday he will watch a youth group perform traditional Palestinian dance at a youth center in Al Bireh, next to Ramallah. From there, as he leaves, he need only look to the hill just above: There stands a place once known as Jabil Tawil, formerly a hiking area for summer visitors from the Gulf. Thirty two years ago, Jewish nationalists, backed by Minister of Defense Ariel Sharon, seized it, planted it with trailers, and renamed it Psagot. Its looming red-roofed homes will stare back down at the president, reminding him of the occupation he is increasingly reluctant to confront.