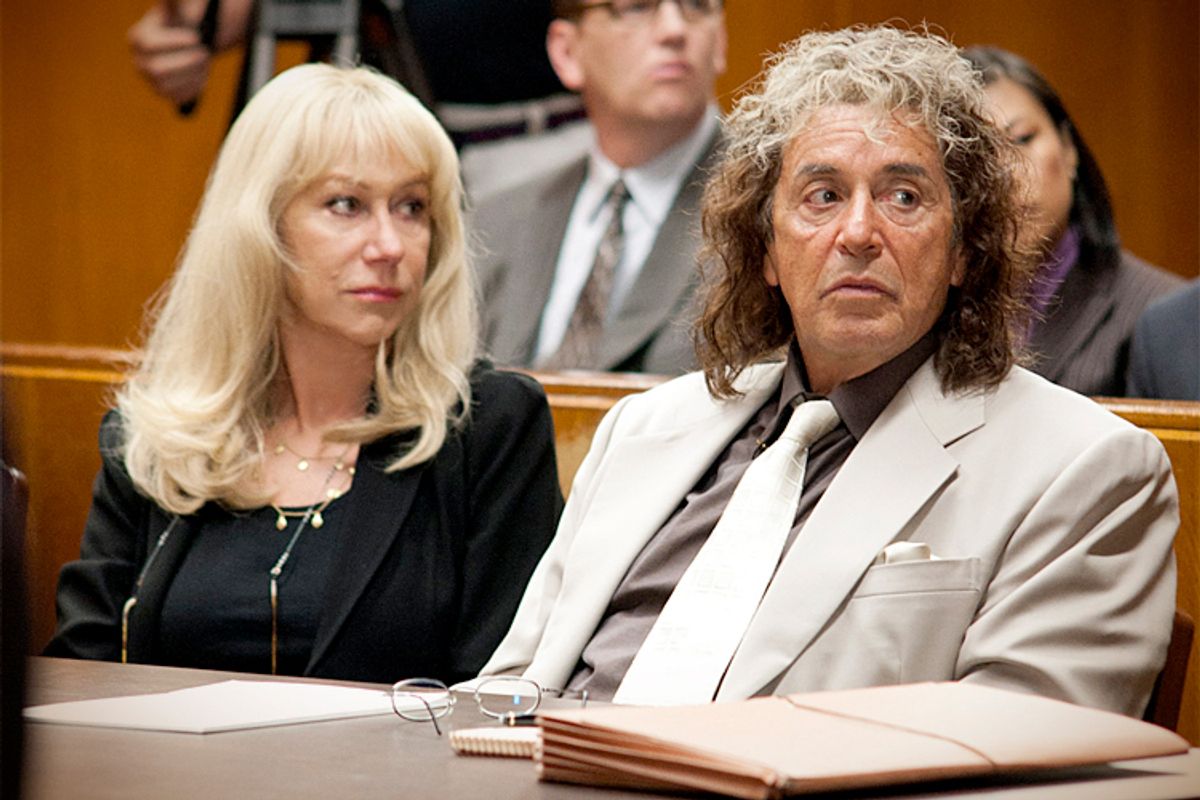 “Phil Spector,” starring Al Pacino and Helen Mirren and directed and written by David Mamet, is a supremely odd film, and not because Pacino dresses up in a wide variety of wigs and rambles sort of in character, like a set of Pacino ticks coming through Quaaludes. The movie, which premieres on HBO on Sunday night, has been disavowed by both Spector’s wife and the survivors of Lana Clarkson, the woman Spector is currently in jail for murdering, and should you watch, you will understand their concerns. “Phil Spector,” reflecting Mamet’s own take on the case, argues, fairly forcefully, that while the one-time wunderkind of ‘60s pop arrangements may have killed Clarkson, there was enough reasonable doubt to have set him free. He was not acquitted, however, because people perceive him as a freak. Spector was too much of an epic weirdo to get a fair trial.

Mamet's movie takes the position that fame is a kind of Faustian bargain, but the price the famous pay is not their soul, but other people’s ignorant opinions and deeds. (Another example of this particular sub-genre.) It is a piece that could only have been made by someone famous, or someone close enough to the famous to have almost total, skewed sympathy for their plight. Mamet fits the bill, and his angle into Spector’s case is that his fame made his eccentricity unforgivable and this got him convicted. “The law doesn’t protect freaks,” a character explains. “Phil Spector” argues that Phil Spector, a megalomaniacal bully who brandished guns at recording studios and threatened at least five women before Clarkson, was actually bullied in a courtroom by regular citizens who didn’t like him for being different. Up is down. Mansions are prisons. Fortunes are chains.

“Phil Spector” focuses on the music producer’s first trial for the murder of Clarkson, one that ended in a mistrial. It begins when Linda Kenney Baden (Mirren) arrives to assist Spector’s current lawyer (Jeffrey Tambor) in figuring out how to defend a client who may not have killed someone, but everyone is more than ready to believe he did. After meeting him, Kenney Baden becomes a gladiator for Spector’s cause, eventually taking over the case, though it’s hard to know what exactly charmed her about her first visit to Spector’s mansion: Was it his ramble about the connections between Abraham and the Kennedys?  The dozens and dozens of guns he used to have? Or his defense of his own character — “They say the Jews invented the music business. I invented the music business. They say I’m standoffish. I'm just inaccessible. I don’t like people? I don’t know, I never spend any time with them.” Whatever it was, she is inspired to take pity on him and his cause.

“Phil Spector” is missing dramatic tension. It’s staged as a movie but it's constructed more like a play, with plenty of scenes of two people exchanging Mametian dialogue in claustrophobic spaces. It is theoretically a legal drama — there are no flashbacks, just the case at hand — but it forgoes any real courtroom standoffs. The movie’s dramatic climax takes place in a mock court, where Kenney Baden is preparing Spector to take the stand. The faux-prosecution (Chiwetel Ejiofor in a really small part) goes after Spector and incites him into a rage — a mass assemblage of Pacino quirks —  exactly the thing that would convince a real jury he was guilty, but is supposed to convince the audience of his fragility.

The emotional climax of the film comes a few scenes later, when Spector arrives in the real courtroom to testify. He is wearing a huge afro wig that he has carefully selected: He tells Kenney Baden to trust him, he knows about showmanship. But Spector's days of understanding showmanship are long gone. Kenny Baden decides not to put him on the stand — he has made himself too strange.  (Al Pacino wearing a Phil Spector wig really works in this instance, as ridiculous and scoffable and striking a sight as, presumably, Phil Spector was himself, but carrying the extra hit of transgressiveness because it is Pacino.)

The film finishes with this decision, this non-action, this not putting Spector on the stand. End notes inform us of the results of this trial and also the next, in which Spector was convicted because, the movie seems to be saying, Kenney Baden was too sick to be his lawyer anymore. Without one person to believe in him, Spector lost the presumption of innocence.

But the weaknesses in “Phil Spector’s” argument about the Phil Spector case, and fame more largely, are made clear by the movie itself. Kenney Baden is convinced Spector will never get off because “They let OJ go. They let Michael Jackson go. They will be trying [Spector] for OJ’s wife.” So do famous people get off easy? Or do they have it hard? If they are treated differently, at least this sometimes works in their favor. "Phil Spector" is not interested in the way that  fame distorts those who have it — in how and why Phil Spector got to be so weird — but is interested only in how fame distorts the way people perceive those who have it. Phil Spector may or may not be the victim of his own reputation, but there was also an actual victim — and she wasn't famous enough to deserve "Phil Spector's" attention.