In support of Facebook's sea of red for equality

The cynics are wrong. Changing your profile picture really is a meaningful act aimed at those you love 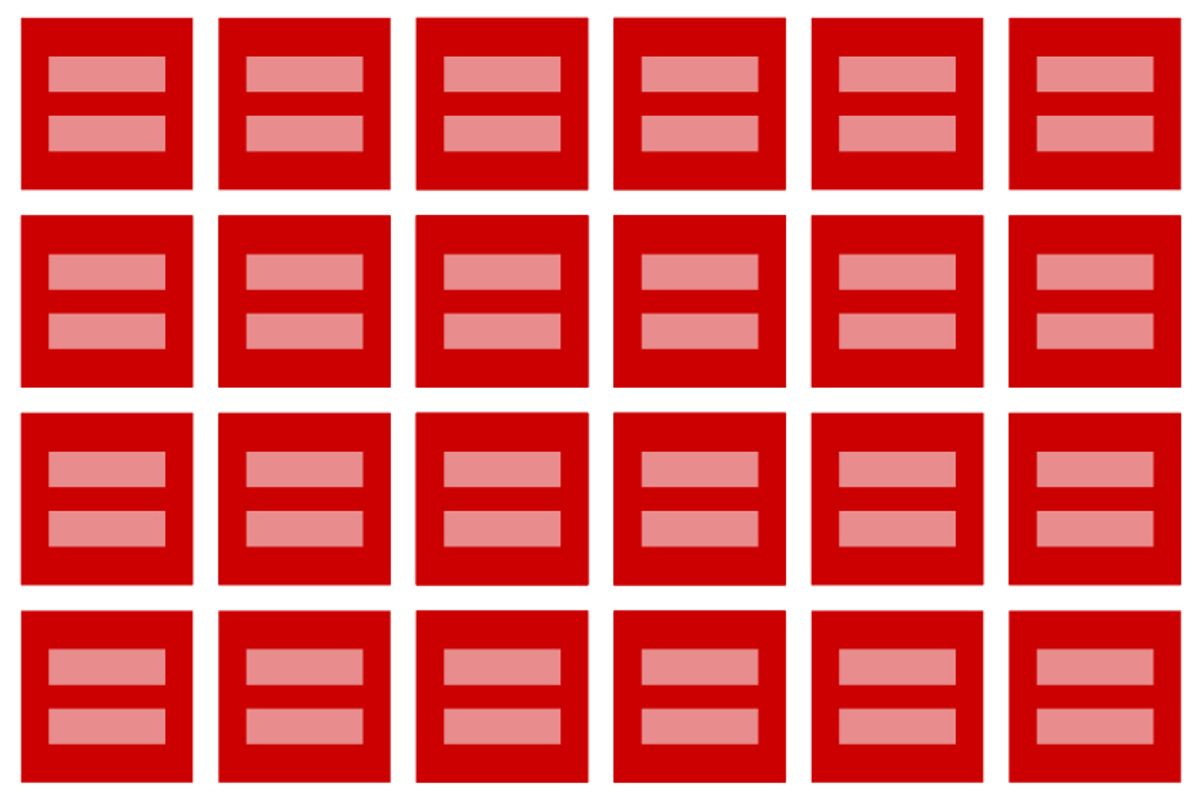 The rainbow has gone in a decidedly more monochromatic direction. If you've been on Facebook this week -- and you're not on the staff of the National Review -- chances are you've already noticed. As the black-robed Supreme Court weighs two cases involving marriage equality, users have been swapping out their usual smiling-during-a-sunset profile pictures with the Human Rights Campaign's scarlet and pink-hued equal sign logo.

The stampede began, as anything Facebook-related does, with George Takei. The actor and social media icon posted the HRC logo earlier this week, with a note explaining that, "For those friends wondering, this special 'red' equality symbol signifies that marriage equality really is all about love. Thanks to the Human Rights Campaign for this effort. Please consider changing your profile today in support -- esp if you are a straight ally."

And what Mr. Sulu says, goes. Throughout Tuesday, Takei also posted a few comical variations on the avatar theme, including my inevitable favorite, the one featuring Grumpy Cat. By the end of the day Facebook had all but turned red, with plain equal signs, glittery equal signs and ones tweaked to feature such legendary couples as Bert and Ernie and Peppermint Patty and Marcie. The always enthusiastic drinking community even got in on the act, with both Smirnoff and Absolut updating their FB avatars to reflect their own twists on equality.

As political forums go, Facebook is a pretty safe space to give vent to your leanings. You are, after all, ostensibly among those who reside on a list called "friends." And posting a red logo is an all but effortless act. It's not a monetary contribution to the HRC or the Trevor Project. It doesn't involve getting on a bus and standing in the cold for a gathering outside the Supreme Court building. It's not a vote. Ultimately, we all know that Antonin Scalia gives zero craps what your avatar is. And as a friend whose Facebook image is of her with her wife and baby daughter says, "I was going to change my profile picture to the red equality sign, but realized that my current picture is what it's all about."

So does it matter? Does a Rothko-like avatar have any more meaning or weight than the typical "CLICK LIKE IF YOU LOVE YOUR SISTER!" junk that already clutters up your stream? My friend Ginnette, who is straight, thinks it does. She calls it "a truly spontaneous gesture of solidarity" -- one she hopes makes a statement to her friends here and back in her native country of Costa Rica. She adds, eloquently, "A lot of my public displays supporting change go to my cousin Oswaldo, who taught me how hard and how easy it can be to just love." Another straight friend, Stacey, acknowledges that "although I know that what happens on Facebook will do nothing to change the mind of SCOTUS," it's a personal affirmation – "one more reinforcement to a cause I believe in." And Pieter says simply, "A 'yeah, me too' is a good thing." My colleague Kera, who is gay, meanwhile says, "There is something so incredibly moving and overwhelming when you open your FB page, and you see friends from all over the country, indeed the world — straight, gay, left, right — taking the time to swap out their mugs for the HRC symbol in solidarity, so that your entire newsfeed is one big same-sex marriage rally."

That's why the gesture – which Perez Hilton understatedly refers to as "the greatest idea since stuffed crust pizza" -- has weight and meaning. It's not an act directed at the whole world. It's not a letter to the Supreme Court. It's a statement of love and support to the people who matter most -- the ones you call your friends. And it's a sweet, simple, powerful way of showing that when you take the faces off Facebook, you're left with a lot of big, open hearts.