"The Place Beyond the Pines": Almost a great American father-son fable 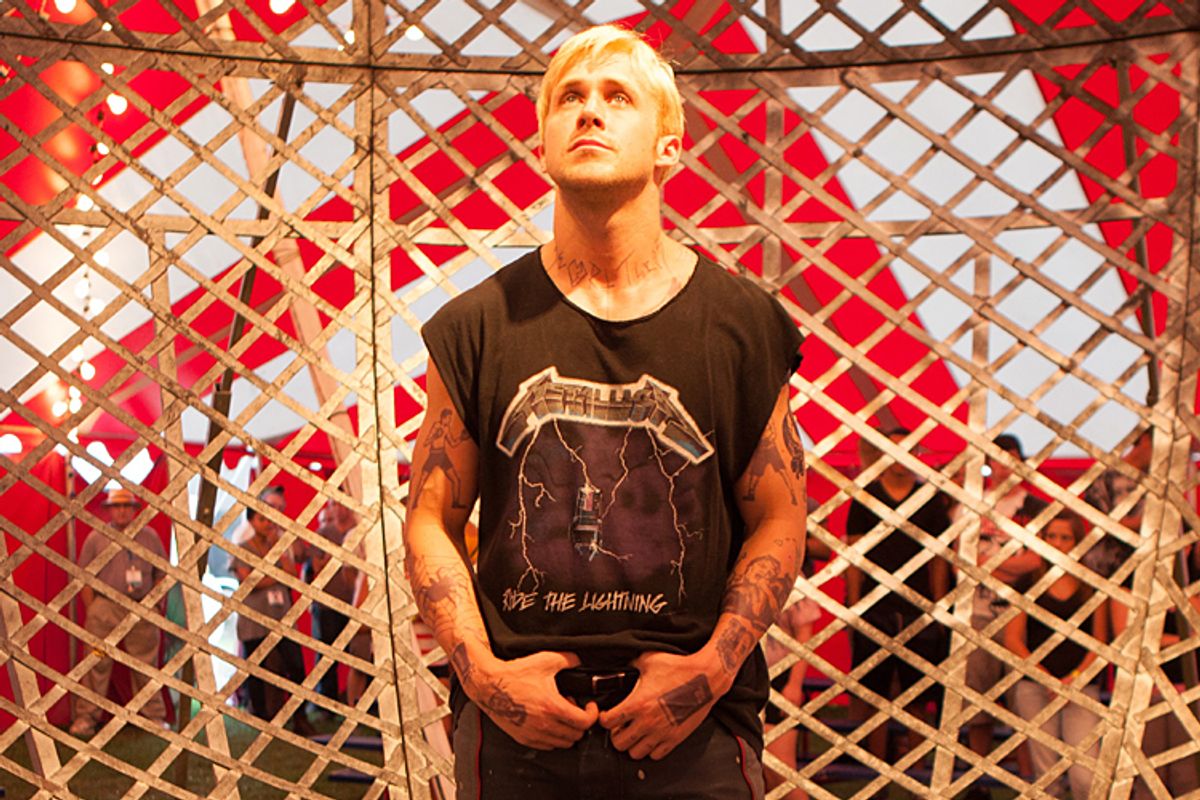 Ryan Gosling in "The Place Beyond the Pines"
--

A sprawling, epic-scale triptych about fathers and sons in America that seeks to combine the spirits of Charles Dickens and Bruce Springsteen, “The Place Beyond the Pines” might be better off if it were just a crime movie with Ryan Gosling. Still, there’s no mistaking the immense ambition and tremendous craftsmanship of director and co-writer Derek Cianfrance (who made “Blue Valentine” with Gosling and Michelle Williams), and I think the movie is most effective if you know little about the story going in. So I’ll be pretty guarded in what I tell you about the story, which takes a couple of surprising narrative left turns and jumps forward in time.

From the opening tracking shot, as Sean Bobbitt’s camera follows Gosling, playing a motorcycle stunt rider named Luke, out of his trailer and across a crowded fairground in upstate New York, sometime around 1995, “The Place Beyond the Pines” displays that intense connection to the working-class Northeast that made “Blue Valentine” so distinctive. A laconic, post-James Dean dreamboat with tattoos and a blond dye job, Luke excites the envy and/or lust of everyone he meets and has no difficulty finding a different girl in every town. Yet somehow, without having Luke say much of anything, Cianfrance is able to convey that he wants something more.

That’s when Luke finds out that a woman named Romina (Eva Mendes), whom he met the last time he came through Schenectady, had a baby about nine months after he blew town. Actually, Romina’s got a boyfriend, Kofi (Mahershala Ali of “Treme” and “House of Cards”), who seems like a stand-up guy with a job and a house and is willing to raise the kid as his own. Arguably this whole movie can be boiled down to Luke’s lack of self-knowledge; if he had taken a long, hard look at his drop-dead handsome self in the mirror and concluded he just wasn’t daddy material, then a long chain of fatalistic and dramatic dominoes would never have been launched.

Because once Luke quits the carny stunt-riding circuit to devote himself to some imaginary ideal of American dadhood, his employment prospects are, as they say, somewhat limited. This makes him easy prey for the shady, avuncular mechanic named Robin (the reliably terrific Australian actor Ben Mendelsohn), who’s been looking for a young, stupid and daring accomplice to get back in the bank-robbery business. If this is familiar territory and almost feels like a dirt-under-the-fingernails remake of Nicolas Winding Refn’s “Drive,” it’s magnificently handled, a propulsive, ominous and profoundly compassionate portrayal of doomed dreamers on the underside of Clinton-era prosperity.

If Gosling doesn’t get much dialogue – in a screenplay that Cianfrance, Ben Coccio and Darius Marder reportedly rewrote 30-odd times – that’s because Luke isn’t a big talker. This likable actor’s chronic overexposure may be ebbing at last, but “The Place Beyond the Pines” shows him at his best, as a person whose semi-iconic cool barely masks a febrile weakness and uncertainty. There's an unmistakable sexual electricity between Luke and Romina that leaves her unable to resist him, despite the bitterly obvious fact that sticking with Kofi is a far more sensible choice. Like low-end criminals the world over, Luke gets too confident, and one of his daredevil bank-heist getaways puts him in the path of Avery Cross (Bradley Cooper), an ambitious rookie street cop and judge's son who has visions of a future in politics.

I said I wouldn’t give away too much about the narrative switchbacks in “The Place Beyond the Pines” and I’ll stick to that. Let’s say simply that the second section of the movie is mostly about Avery and his rise to power, while the third section isn’t about Avery or Luke, but follows their kids into the present through the long aftermath of their first, fateful encounter. Avery is a clean cop with a hero’s reputation who gradually turns his department’s extensive culture of corruption, exemplified in an unctuous but charming senior detective played by Ray Liotta (as ever, the king of scumbags), to his advantage. (Free advice to the Schenectady chamber of commerce: Just let it roll off; keep that press release in the Drafts folder. Trust me.)

This episode of the film is also compelling, in a different vein – the urban political thriller or cop procedural – but the ironic contrast between Avery and Luke is ladled on pretty thick. Avery stays on the right side of the law (as far as the world knows) and Luke’s a dangerous renegade, but one of them’s trying to provide for his family while the other is thinking only of himself. Actually, to put it more accurately, both are pursuing mythical ideals of American manhood, and both will reap the fruits of their delusions in almost Biblical fashion. Unfortunately, while the middle portion of the film is only slightly weaker than its opening section – and Cooper’s careful performance as the hooded, calculating Avery simply can’t compete with Gosling’s charisma – the final section plunges off a cliff, from the territory of Major American Film into that of After-School Special.

It’s not revealing anything huge to say that the last third of the movie is set in or near the present, when Luke’s and Avery’s sons are teenagers and high-school classmates who meet by accident, not knowing their dads’ past history. Cianfrance is going for a big payoff here, no question; some grand allegory is in view about the toxic nature of so many male friendships and mentor-student relationships and about how badly fathers can screw up their sons. But it all feels reasoned out or imagined to me, rather than felt, and the highly specific cultural and geographical details of the first two sections – its profound Schenectady-ness – is replaced by generalizations, including Emory Cohen’s performance as Avery’s son, a gangsta-lingo, drug-abusing caricature of the privileged kid gone wrong.

I never stopped being interested in “The Place Beyond the Pines,” and never stopped rooting for Cianfrance to make the hubristic ambition of his immense tripartite scheme pay off, even as it evidently falls apart. More sympathetic viewers than I may simply ride with the tremendous momentum of the Gosling-Mendes section and forgive its slow decline, and more power to them. The movie looks great throughout, blending action, urban drama and family melodrama with a dark, thrumming undertone that holds them together. But like its overly symbolic title – which I could only half-explain even if I wanted to – this movie feels too loaded down with significance to simply be what it is.