The "Today" host keeps trying to do damage control, and keeps making things worse. Maybe he's just not that nice? 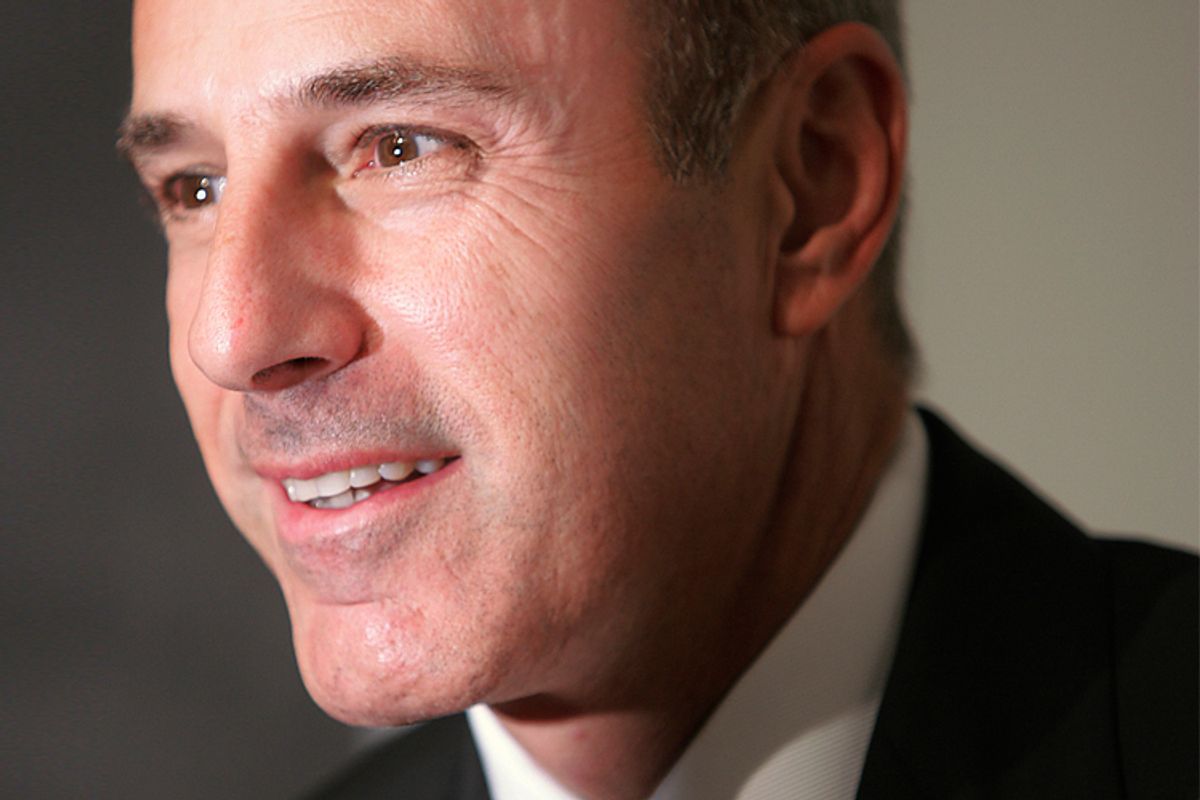 Cheer up, Matt Lauer. The week's almost over. Of course, the past few months haven't exactly been a picnic for  the handsomely paid host of the "Today" show.  But did Al Roker tell him that his forecast for late March would be a severe crap storm?

Now in his 20th year as NBC's main man in the morning, Lauer was long considered near-invincible. He was good-looking enough to lure bleary-eyed morning viewers, possessed a gravitas that enabled him to cover serious political stories and interview heads of state, but was also playful enough to invite the audience to go on a worldwide treasure hunt searching for… him. In the halcyon Katie Couric era, "Today" seemed precisely what America wanted for breakfast.

But it's been a rocky public relations period since. Last year, there was the awkward, much-rumored courtship between Lauer and ABC, while his home network allegedly dangled his "Today" show seat before featherweight Ryan Seacrest. Lauer ended his dalliance with ABC and stayed on "Today" when NBC made him the highest, most grudgingly paid morning anchor in television history. Meanwhile, until she was clumsily shown the "Today" door, there was Lauer's on-air partnership with Ann Curry -- a textbook example of whatever the German word for "the opposite of chemistry" is.

This week Lauer had faced an enormous, not-so-flattering New York magazine cover story, one that depicts him as, according to network insiders, both "the Johnny Carson of morning TV" and "aloof, a little bit holier-than-thou, and pompous." In it, Joe Hagan lets readers relive the moment of Curry's departure, in which she appeared "to recoil from a visibly shaken Lauer" and painted the often "sour" host's London Olympics persona as "stiff and isolated."

Lauer's image didn't improve when Us magazine this week depicted him as a lady showrunner-shunning crank, who allegedly told a senior staffer that having three whole female producers running the show "reminded him of Lilith Fair." On Wednesday, New York Times reporter Brian Stelter, who's been colorfully covering the "Today" show bloodbath, wrote that a network executive had reportedly reached out to beloved CNN host Anderson Cooper "to size up Mr. Cooper’s interest in co-hosting 'Today.'"

NBC has denied the rumor, saying, "We are not considering replacing Matt Lauer." But if it's true, one has to ask, why not? Cooper is personable and real, and connects deeply with his audience on meaningful issues, like Curry did. He's a serious newsman. And, let's just say it, he's also an adorable giggle monster. The only real surprise in NBC's handling of the morning show debacle is that they haven't yet fawningly offered the job to Jay Leno.

So great is Lauer's need for damage control, stat, that he voluntarily found himself in a Twitter conversation with "Wealthy BigPenis" about whether he had been "a dick" to an intern 16 years ago. When the former intern tactfully described him  as "not nice," Lauer non-apologized back, "Huh? Always tried to be nice Mark. Sorry you didn't think so." (The tweet has since disappeared.)

Maybe Lauer is just misunderstood. Maybe Curry's "recoiling" was just a weird camera angle and not a shudder of revulsion. But when someone who has perhaps been "not nice" in the past responds with a What, me, huhhhh? and a hey, I tried to be nice, but sorry you didn't think I was, well, my hunch is that Wealthy BigPenis is on to something here.

Lauer is still a fabulously wealthy man with one of the most sought after positions in broadcasting. He may be a little "sour" about it, and he may have to get out of bed pretty early, but the morning is still pretty much his oyster. And if the hot mess that is NBC in general -- and Lauer's public image in particular -- has echoes of former "Today" host Bryant Gumbel's disastrous time after a leaked memo revealed his simmering contempt for his co-stars, history says it'll pass. Gumbel went on to host "Today" for nine more years after that little fiasco. If he chooses, Lauer could likely skate by just as long, laconically "trying" to be nice to the best of his ability.