"Game of Thrones": Fire up the dragons!

"Game of Thrones" returns, taking more liberties with the books than ever -- and yet seeming even more novelistic 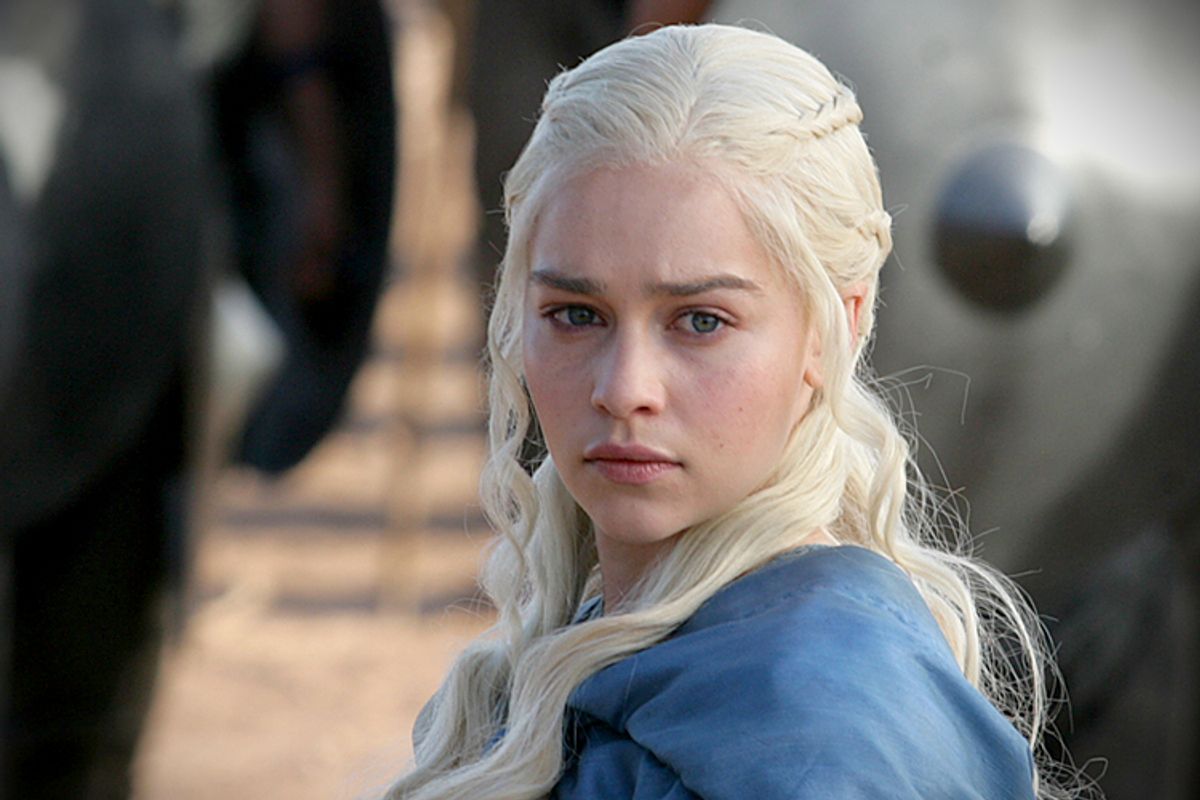 In the new season of HBO’s “Game of Thrones,” which begins Sunday night, Sansa Stark, the young woman who has seen her father decapitated and her fantasies destroyed and now finds herself a terrified captive of a court that at any moment could treat her as an enemy, but for now treats her as semi-honored guest, sits by the water and makes up stories about the boats coming into harbor. Her companion doesn’t want to play: She recognizes the ship’s real origins and doesn’t see the point in fabricating a tale about them. Sansa grows frustrated. The whole point of the game is to imagine a different story, “because the truth is either terrible or boring.”

The third season of the epic “Game of Thrones" toggles between more positive versions of these two states, alternating between horrifying grisliness and very stately setup. Watching feels like getting into a warm bathtub lined with spikes: luxurious, enveloping, likely to cause gasps. The season’s first shot is a frozen man, on his knees, cradling his decapitated head in his own hands. Soon, a man’s nipple has been sliced off, a hand has been severed and the stump rubbed in the mud, dark blood has gurgled from many a mouth, and horses have been dismembered and arranged by some ice zombies who must really admire the Spiral Jetty. Between all this brutality, we methodically revisit the vast, increasingly far-flung cast, many of whom are doing nothing so bloody as talking. (If it was once possible to dive into the middle of “Game of Thrones,” that moment is long gone. If you haven’t been watching or reading along, get back to the beginning and start from there.)

David Benioff and D.B. Weiss, the duo who have been adapting and filming George R.R. Martin’s novels for television, seem entirely unflustered by the size and scope of the source material. They will not be hurried. They are heavily editing — streamlining some stories, fleshing out others — but they are in no rush. As a result, even as “Game of Thrones” is increasingly unfaithful to the books, the experience of watching feels more and more novelistic, an exercise in patience, in letting a world develop and encompass you. As the show jumps from character to character, watching feels like nothing so much as reading, not just the "Song of Ice and Fire" saga but novels like “A Visit From the Goon Squad” or “Cloud Atlas,” which interrupt a reader’s relationship with a story long before she’s through, and then pull off the magic trick of making her care just as deeply about what comes next.

I suspect that every “Game of Thrones” watcher will have certain story lines that excite him or her more than others — and that this hierarchy of character will change as the plots heat up and cool off. Certainly, I was more pumped to watch Daenerys and her dragon get fiery than to meander through Bran’s dream states. Peter Dinklage continues to steal scenes as clever Tyrion, but his courtly intrigue is less interesting to me than the manipulations of Margaery Tyrell (the scene-stealing Natalie Dormer) who has cannily wrapped the vile Joffrey around her finger. (The gender disparity of “Game of Thrones'” nudity notwithstanding, it remains one of TV’s most gender-balanced series, with at least eight well-drawn, individually complex female characters.)

Especially at the beginning of this season, in which there’s a lot of positioning characters in the place they need to be for the next interesting thing to happen to them, a redistribution before the realpolitik, watching week to week may be frustrating, no one episode ever quite enough. I watched four in a row and I still didn’t feel quite sated. But I did feel surrounded. “Game of Thrones” is as complete a universe as exists on television, whatever its rhythm. More drama and more bloodshed are certainly forthcoming, and I have every confidence they will be served up as delicious and sopping as a rare steak. To slightly misquote Lady Olenna, Margaery's grandmother and "Game of Thrones'" rejoinder to "Downton Abbey's" Dowager Countess," “Winter is coming. Now that will be memorable."

(If you haven't had your fill of my thoughts on "Game of Thrones," I'll be recapping the series beginning this Sunday night. Check back at Salon at 11 p.m. EDT for the first installment.)