The best and worst apologies of the week

Don Young, Matt Lauer, Rick Ross, David Petraeus -- it has been a week of sorry apologies and mansplaining 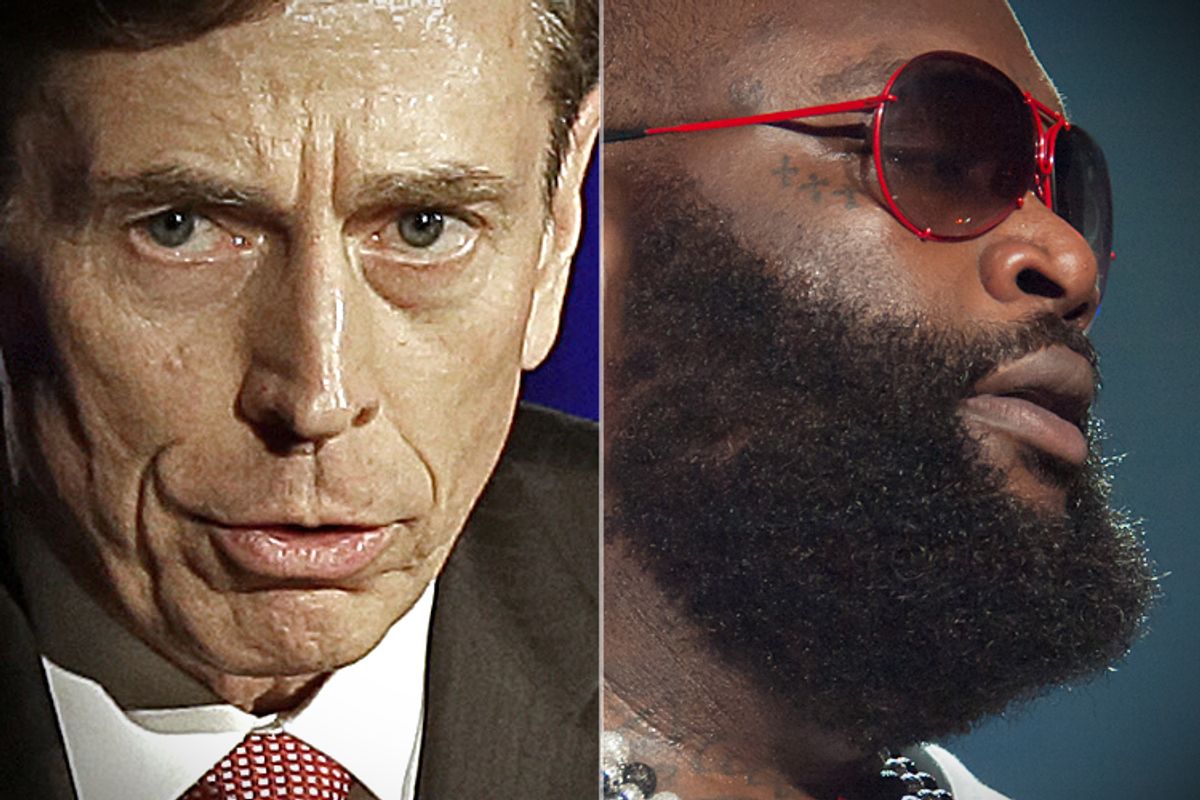 It has been one sorry excuse for a week. Each new day has brought with it a fresh batch of bad behavior and questionable decision making, and with it, apologies of highly variable quality. If you're looking for object lessons in what not to say – and how to get it right – behold our rogue's gallery of March mad men.

Let's start with our gold medalist in the field of ineffectual apologies – Rick Ross. Ross has come under fire for his part on Rocko's "Gift of Gab" mixtape, specifically the track "U.O.E.N.O." As activist journalist Rosa Clemente pointed out, "U.O.E.N.O." contains Ross' "problematic" line, "Put Molly all in her champagne, she ain't even know it/ I took her home and I enjoyed that, she ain't even know it." "Molly," by the way, is what the young folk call Ecstasy.

Faced with being called out for glorifying the practice of drugging and raping women, Ross took to New Orleans radio station Q 93.3 to mansplain himself. "I would never use the term 'rape' in my records and as far as my camp," he said. "Hip-hop don't condone that, the streets don't condone that, nobody condones that. So I just wanted to reach out to all my queens that's on my timeline, all the sexy ladies, the beautiful ladies that have been reaching out to me with the misunderstanding: We don't condone rape, and I'm not with that." And Ross emphatically stated, "I want to make sure this is clear, that woman is the most precious gift known to man. It was a misunderstanding with a lyric, a misinterpretation where the term rape wasn't used."

While it's commendable that Ross has taken the brave stance that he doesn't condone rape, he never explained what the "misunderstanding" about putting something in a woman's drink and then taking her home and "enjoying" her without her knowledge or consent might be. And when you're trying to prove how enlightened and sensitive you are, it's not the best moment to patronizingly sing the praises of the sexy, beautiful ladies. Thanks for the attempt, Ross, but moving forward, here's a tip: Women were not put on this earth to be a precious gift to men. Maybe when you can see them as something other than shiny presents placed here for your edification, we won't have these little misunderstandings.

Taking a seat next to Ross on the "needs improvement" bench, there's Alaska congressman Don Young, who on Thursday reminisced about the good old days on a local radio station by recalling, "My father had a ranch; we used to have 50 - 60 wetbacks to pick tomatoes." Later in the day, after someone living in the 21st century apparently clued in the Republican lawmaker that "wetback" is no longer interchangeable for "Mexican immigrant," Young stated, "I used a term that was commonly used during my days growing up on a farm in Central California. I know that this term is not used in the same way nowadays, and I meant no disrespect." Nowhere in there does he get that it's offensive. That it's inherently insulting and always has been. Instead, he fell back on the lazy excuse that it was once commonplace. And an apology without enlightenment is pretty useless.

Finally, as we mentioned Thursday, there's Matt Lauer, who tweeted the classic non-apology to a former intern – "Always tried to be nice Mark. Sorry you didn’t think so" -- and then ramped up the lame even further when the tweet disappeared altogether. Write this one down, halfhearted, reluctant apologizers everywhere: saying you're "sorry" for how someone feels or thinks is saying you're not at all sorry for how you behaved.

And yet, lest you think nobody knows how to own up to bad behavior, there have this week also been some fine examples of how to do it correctly. David Petraeus, the former head of the CIA/ladykiller appeared at a Los Angeles ROTC dinner and got the awkward part out of the way early. "I join you, keenly aware that I am regarded in a different light now than I was a year ago," Petraeus said. "I am also keenly aware that the reason for my recent journey was my own doing. So please allow me to begin my remarks this evening by reiterating how deeply I regret -- and apologize for -- the circumstances that led to my resignation from the CIA and caused such pain for my family, friends and supporters." Gosh, he makes it look so simple.

Petraeus wasn't the only one who got it right. Trayvon Martin shooter George Zimmerman's brother, Robert, issued a mea culpa after his racially incendiary tweets about the "lib media" and "black teens." On Piers Morgan's show, Zimmerman acknowledged "those were controversial and offensive" statements and "I did publicly apologize for them. I'm a human being. I'm being upfront about what I did. I made a mistake." (Zimmerman is still however referring to Martin on Twitter as the person "who attacked my bro & nearly killed him," so there's more work to be done here.) And after CBS analyst Doug Gottlieb made a crack about offering the "white man's perspective" while doing a pregame show with his four African-American co-hosts, Gottlieb issued a statement saying, "It was not a smart thing to say and I apologize."

See? It's not so hard. Acknowledgment of wrongdoing. Contrition. Maybe even a hint that you won't screw up like that again. Everybody flubs it now and then. What matters, what goes a long way in putting the error in the rear-view mirror instead of the trunk with all the rest of the emotional baggage, is how you face up to it. Just say you're sorry. Just say it like you mean it.