Meanwhile, governments across the region are enacting tough austerity measures to get a handle on their debts 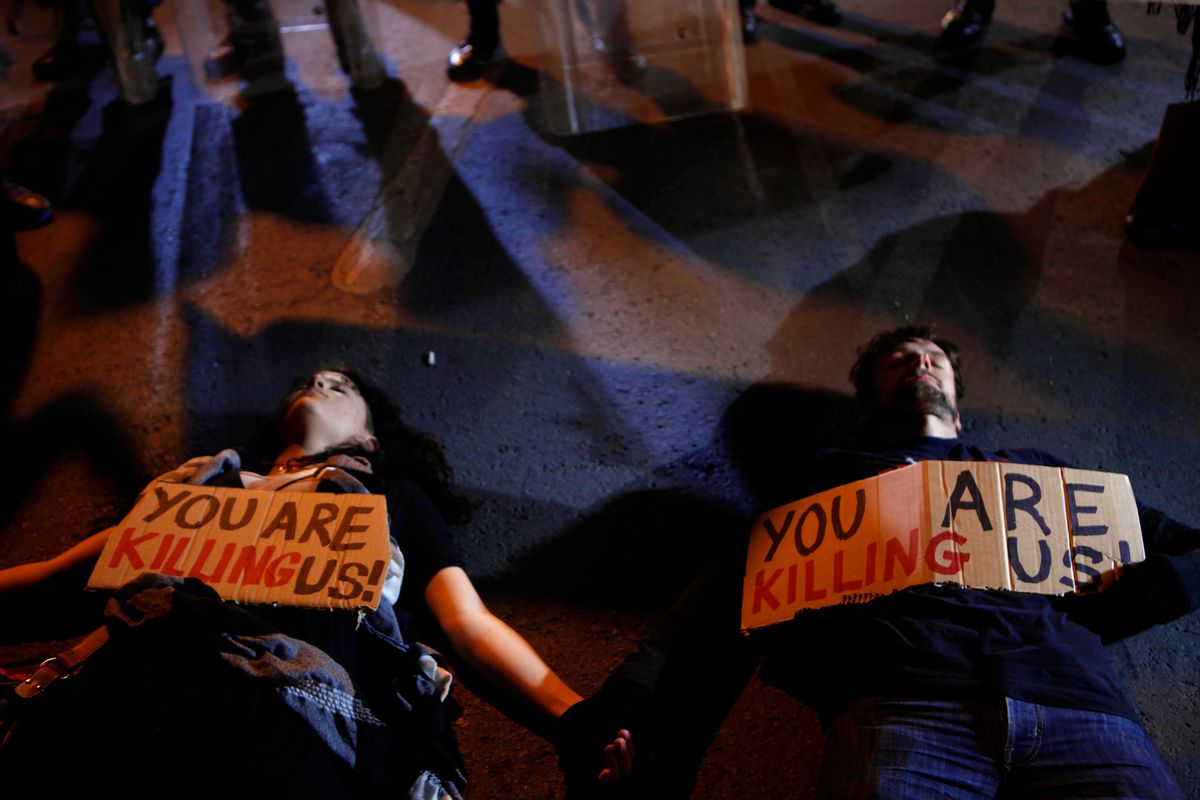 LONDON (AP) — The eurozone economy has passed another bleak milestone.

Official figures Tuesday showed that unemployment across the 17 European Union countries that use the euro has struck 12 percent for the first time since the currency was launched in 1999.

Eurostat, the EU's statistics office, said the rate in February was unchanged at the record high after January's figure was revised up to 12 percent from 11.9 percent.

Spain and Greece have mass unemployment and many other countries are seeing their numbers swell to uncomfortably high levels as governments across the region enact tough austerity measures to get a handle on their debts.

The eurozone, which is made up of a little more than 330 million people, is one of the world's major economic pillars and the turmoil surrounding it has been one of the main reasons why the global recovery has been muted.

A total of 19.07 million people were officially out of work in the eurozone in February, nearly two million more than the same month the year before. For the 27-country European Union, of which the eurozone is a large part, the unemployment rate was 10.9 percent.

"Such unacceptably high levels of unemployment are a tragedy for Europe and a signal of how serious a crisis some eurozone countries are now in," said EU Employment Commissioner Laszlo Andor.

Even though the eurozone has achieved another disappointing record, for the positively-inclined there was some comfort to be found.

The 33,000 increase in the number of unemployed in February was the smallest monthly rise since April 2011 and way down on the 222,000 recorded in January. And Germany, Europe's biggest economy, has an unemployment rate of only 5.4 percent. That's even better than the U.S. rate of 7.7 percent.

However, the February figures came before the recent Cyprus crisis.

The worry in the markets is that the chaos surrounding the country's bailout has reignited concerns over the euro and may have further dented confidence across the eurozone — a backdrop that's hardly conducive to job creation, economic recovery and stability across the eurozone.

"The economic and social consequences of high unemployment continue to represent one of the most significant threats to the future of the eurozone," said Marie Diron, senior economic adviser at Ernst & Young.

It's certainly a real threat to the immediate future of Cyprus.

Unemployment on the east Mediterranean island nation of barely a million people is expected to ratchet higher over the months ahead as the economy contracts sharply.

Many economists are forecasting that the Cypriot economy will shrink 10 percent this year alone and see unemployment rise up to Greek and Spanish levels. In February, Cyprus' unemployment stood at 14 percent, compared to Spain's 26.3 percent.

Greece, which is in its sixth year of a savage recession, had an unemployment rate of 26.4 percent in December. Its figures are compiled on a different timeframe and the actual rate in February will probably be even higher.

Prior to the Cypriot crisis, there were signs that Europe's debt crisis had calmed. Stock and bond markets had risen for nearly six months, boosting confidence in countries' ability to finance themselves.

But while markets have improved, the eurozone economy has sunk back into recession as many governments in the region enacted big spending cuts and tax increases. Some countries, such as Greece and Portugal, are doing so as part of their international bailouts after they lost the confidence of bond investors, while others such as Spain and Italy, are pursuing tough budget policies to avoid suffering the same fate.

The eurozone's economy is forecast to contract by 0.3 percent in 2013, according to the European Commission, the executive arm of the EU. Official first-quarter gross domestic product figures for the eurozone and EU are due to be released next month.

A closely watched survey released Tuesday indicated that the recession is likely to have continued in the first quarter. The monthly purchasing managers' index for the manufacturing sector — a gauge of business activity published by financial information company Markit — fell to a 3-month low.

Though the PMI was not as bad as first estimated a couple of weeks back, it fell to 46.8 points in March from 47.9 in February. Anything below 50 indicates an economic contraction.

The worry in the PMI survey was that manufacturing activity weakened across the eurozone, including Germany, Europe's export powerhouse.

"While in some respects it is reassuring to see that the events in Cyprus did not cause an immediate impact on business activity, with the final survey results even coming in slightly higher than the flash estimate, the concern is that the latest chapter in the region's crisis will have hit demand further in April," said Chris Williamson, chief economist at Markit.