Colonial Williamsburg: Where the Tea Party gets schooled

There's lots of NRA and Tea Party garb in colonial Williamsburg. But the history has a confrontational new approach 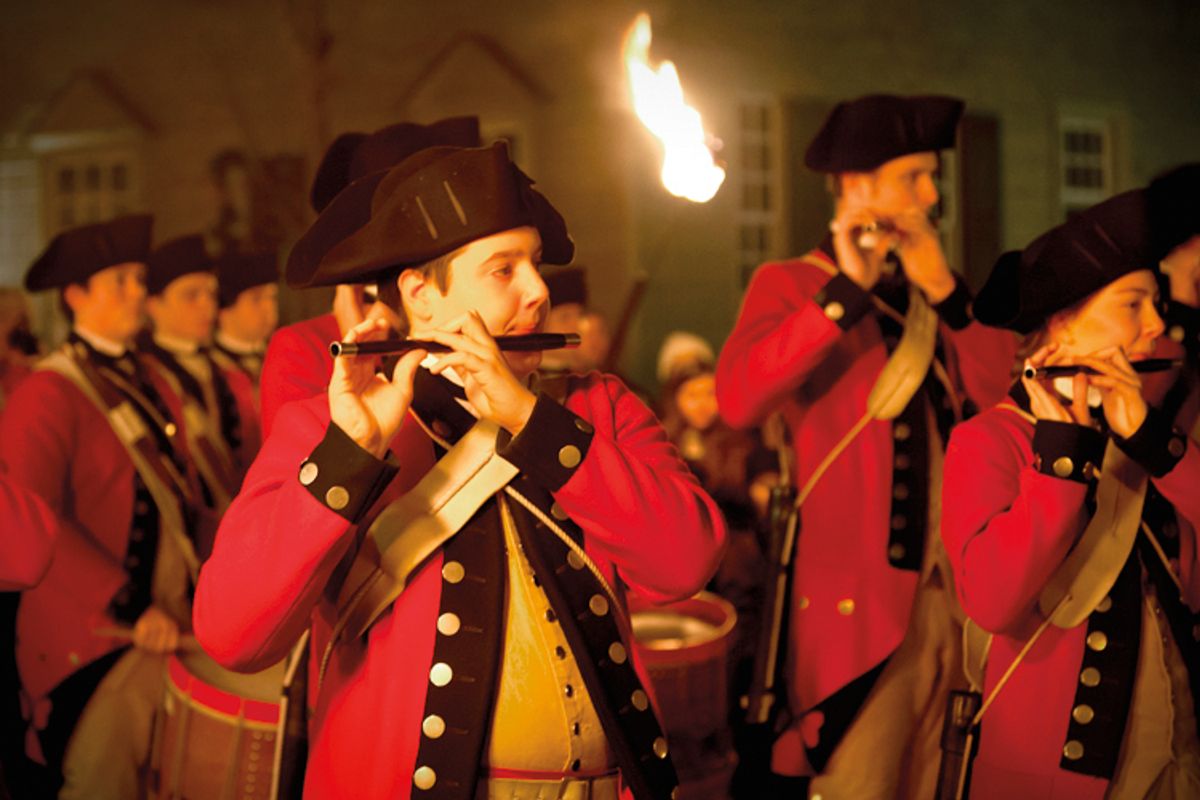 Fife and drum corps march in Illumination of the Taverns in Colonial Williamsburg. (Steve Heap via Shutterstock)
--

So I just got back from a family vacation at Colonial Williamsburg, the Virginia granddaddy of all American “living history” museums. (They hate the term “theme park,” and those people in 18th-century costume are “actor-interpreters,” not characters.) The first thing to say is that we all had a great time: My kids studied up on Revolutionary War spycraft, watched several terrific programs of 18th-century theater, and delivered orations from the Declaration of Independence late at night in our hotel room. We learned how bricks and barrels were made in that pre-industrial age, and my nine-year-old daughter signed up in the Virginia militia to fight the British. (Historical accuracy be damned: One of her drill sergeants was female too.)

You can still snack on butter-rich ginger cakes, go window-shopping for overpriced pewter ware and indulge in other old-timey pastimes in Colonial Williamsburg, and we did those things. But what I'll never forget about that visit is sitting in stunned silence amid a crowd of 200 people, nearly all of them white, watching an African-American woman break down sobbing at the news that her children had just been sold at auction, while her husband describes the vicious whipping he received after a failed escape attempt. Yes, the chemistry between the intense emotion of the scene and the audience demographics bordered on the uncomfortable, but the effect also felt calculated. (Which may not have been the case with an infamous slave-auction re-enactment staged at Williamsburg in 1994, which led to considerable consciousness-raising.) It was one of the most powerful moments of live theater I’ve ever experienced.

This might sound far-fetched, but Colonial Williamsburg, in its subtly transformed 21st-century mode, feels like a covert battleground in America’s culture wars. It’s where an overwhelmingly white and conservative audience meets the post-Howard Zinn cutting edge of history. (How much attention they pay, and how much they like it, is another question altogether.) If your ideas about the place are based on that grade-school trip you took with your grandparents, I can assure you that the effect is pretty different now. Beneath its manicured and bewigged surfaces, Colonial Williamsburg is trying to break free of its stodgy traditions and bring its visitors face to face with the internal conflicts and contradictions of the Revolutionary War era and their ripple effects across politics and society today.

That wrenching scene backstage at the slave auction was the second of two episodes we watched about how the Revolutionary period affected the lives of African-Americans in Williamsburg, a city where black people, both free and enslaved, made up more than half the population in the 1770s. Later that day, we watched the second of two scenes about American Indians, in which warriors from the Chillicothe Shawnee people, who are holding the famous frontiersman Daniel Boone as a hostage, engage in a failed parley with an officer from George Washington’s Continental Army. The Shawnee men leave the gathering vowing to wage war against the perfidious “long knives,” or white American settlers, for control of the Ohio Valley, although they understand that the outcome might well be the destruction of their people.

These startling and even confrontational vignettes – part of a growing and evolving street-theater program called “Revolutionary City,” which explores the social conflict of the Revolutionary era from a variety of perspectives -- are not isolated events. Over the last three decades, the Colonial Williamsburg Foundation, a nonprofit originally envisioned and endowed by John D. Rockefeller in the 1920s, has undergone a gradual but ambitious reinvention, fueled partly by changing cultural and social realities but also by a wealth of new historical research into the Colonial and Revolutionary periods. This conceptual reimagining, which has involved considerable collaboration with academic historians, seems to have accelerated rapidly since "Revolutionary City" was first introduced in 2006. (The American Indian programming we saw was introduced just two years ago.) Once concerned almost entirely with historical preservation, the foundation now sees its primary mission as “citizen education,” using “historically authentic stories” to illuminate contemporary issues. To put it another way, nearly the whole place feels like a teachable moment, from the time you leave the visitors center over a footbridge that nominally takes you backward into the past. ("1954: You tolerate segregated schools," reads one inset in the bridge. "1920: You accept that women cannot vote or own property," reads the next.)

Not far below the surface, one of the subjects of inquiry at Colonial Williamsburg is the place’s own peculiar history, and its uneasy relationship with its core demographic. For the first several decades of its existence, the 301-acre historic restoration at the heart of Virginia’s colonial capital (about 80 percent of the buildings are actually 20th-century reconstructions) presented a static fantasy version of gracious elite living in the years before the Revolution – "Lifestyles of the Rich and Famous," circa 1770. An official Williamsburg guidebook that my wife’s family picked up on a 1978 visit never directly mentions slavery or race, and the Revolutionary War itself is discussed only in passing, as an event that lends significance to the architecture, décor and costuming.

Historians Richard Handler and Eric Gable dubbed Williamsburg the “Republican Disneyland” in 1997, and the label stuck because it rings true to this day, long after the blithe racism of Williamsburg's early programming has been transcended. I saw more National Rifle Association, Marine Corps and Tea Party-type bumper stickers in our first morning at Williamsburg than I see in New York City in a year. (My favorite featured the Obama logo morphing into a hammer-and-sickle: “Is THIS the Change you voted for?”) During spring-break week the visitor population was rich with Christian youth-group T-shirts, matching sets of NCAA-licensed athletic apparel -- there were a whole bunch of Wake Forest fans that week -- and red-white-and-blue gimme caps from the gift shop. I certainly saw a few people of color as the week wore on, but vastly fewer than we would have encountered at Busch Gardens, the major amusement park a few miles away. There were exactly three African-American families in the large crowd for that theater piece set backstage at the slave auction.

Every article ever written about Colonial Williamsburg brings up the overwhelming whiteness of the visitor population. Given that the venue was literally segregated during the Jim Crow era (blacks were admitted only one day a week, and the actors playing slaves lived in separate quarters), made no effort to include programming on African-American life until the 1980s, and cannot avoid focusing on the single most painful aspect of African-American history, it’s not exactly shocking that black people aren’t breaking down the doors. Another factor may be that the Revolutionary War itself is often seen, not just by African-Americans but by everybody, as an all-white duel of elites – George Washington vs. King George – whose ideas and slogans and conflicts are locked away behind glass in the vitrine of the distant past.

That dusty sense of certainty is exactly what has long made the American Revolution feel like a safe zone for contemporary conservatives; contemporary Tea Party activists picked their name for a reason. The heroes and villains of the Revolution seem clear-cut, and there’s very little popular debate about underlying causes (which makes it very different from the Civil War). The schoolbook versions are loaded with heroic deeds, truisms about God and tyranny and liberty, and paeans to the blinding greatness of the Founding Fathers, usually considered as a semi-divine monolith rather than a group of bickering men. That certainty is also exactly what the “Revolutionary City” program at Colonial Williamsburg seeks to undermine. ("Revolutionary City" is now concentrated in a 90-minute chunk towards the end of the day, but this summer it will expand throughout the schedule and become increasingly interwoven with other events.)

No doubt "Revolutionary City," along with Colonial Williamsburg's extensive Web outreach and ventures into social media, is in large part a matter of adapting to a changing environment. Attendance has trended steadily downward since a peak in the mid-1980s, and the institution faces a version of the Republican Party's marketing problem: An all-white, heartland-based demographic is no longer enough. But unlike the GOP's soul-searching, the process of reinvention at Colonial Williamsburg feels genuine and all-pervasive. (I should make clear that you can can observe most outdoor activities in Williamsburg, including some of the "Revolutionary City" theater, without paying admission.) Given its long-standing image as the squarest and most white-bread of all American tourist attractions, the question of whether Williamsburg can attract a new audience without totally driving away its old one is a puzzler.

It's possible to ignore the messaging at Colonial Williamsburg and just admire the clip-clopping horses, the cutesy handicrafts and the rather anodyne pronouncements of George Washington, who projects just the air of reserve and rectitude you expect. But over the course of a Williamsburg day, we are repeatedly reminded that the magnificent Enlightenment rhetoric of the Revolutionary age came with asterisks, and did not apply to African-Americans, women or Indians (described in the Declaration of Independence as “merciless savages”). In RevQuest, a popular interactive game played mostly by children and teenagers, visitors learn that black people who took part in the Revolution largely fought for the British crown (in order to gain their freedom) and then were forced to emigrate. (Many of their descendants live in the Canadian Maritime Provinces to this day.) On the American side, even a genuine war hero like James Armistead, George Washington’s African-American double agent, required the personal intervention of the Marquis de Lafayette and an act of the Virginia legislature to gain emancipation several years after the war.

Beyond the glaring racial hypocrisy, other “Revolutionary City” episodes bring up uncomfortable contrasts. When Benedict Arnold and the Redcoats “take” the town (as they briefly did, in 1781), the infamous traitor scoffs at our boos and catcalls. You losers threw away British security over a few pennies in taxes on tea, he demands, wrecking your economy and leading to all this death and suffering. What was that all about? No one in the crowd can come up with anything good. “Religious freedom!” someone shouts. “Worship whatever deity you please,” Arnold retorts, as long as you tithe to the Church of England. “We’re taxed too much!” says someone else. Your taxes under the Continental Congress are 100 times higher than under the king, he tells us. You can almost feel the anxiety of the crowd: If the Revolution was about something bigger than church or taxes, what was it?

Sneakier still, in an almost Brechtian vein, is "A Court of Tar and Feathers," an episode with undertones of the Milgram experiment. Three men from the crowd are hauled up on an outdoor stage to serve as the jury in a kangaroo-court case against a suspected Loyalist, who is accused of demeaning the Revolution. Indeed, we’ve heard him say it: “I sing the cause of America each time I visit the necessary house.” Guilty as charged! The men on stage are rushed into a sentence: The miscreant must issue a craven apology, or be tied up at the "liberty post," coated with tar and feathers and ridden out of town on a rail. No, we don't actually see this happen, but it's a scary moment.

I can only assume that other people in the crowd noticed that this guy was being persecuted and threatened with torture for exercising the most basic of our constitutional rights, one that all Americans supposedly understand and treasure. (We do tend to give it up pretty easily in times of crisis, don't we?) Maybe sometimes during this scenario somebody speaks up for him, and the actors have to veer off script a little. But we all just stood there politely and watched, which I guess was pretty much the point.