The man behind "Mad Men's" bratty boy-man discusses shaving his hairline, the inner Pete, and slipping by unnoticed 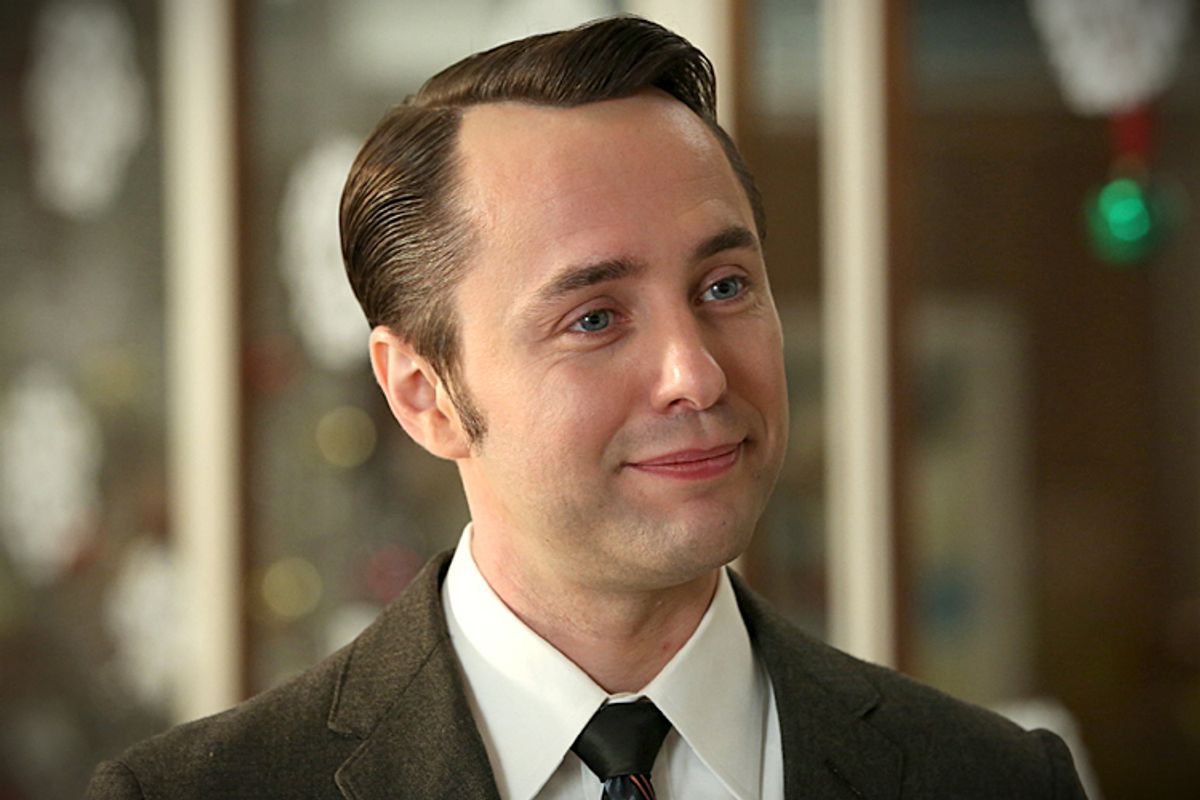 Vincent Kartheiser, who plays the smarmy Pete Campbell on "Mad Men," was in quite a mood a few Saturdays ago. As he told Vulture, "I wasn’t in a good mood this morning. I was so depressed. Because it’s fucking Saturday and I’ve worked every day this week," and there he was working again, talking to journalist after journalist about the new season of "Mad Men," which begins tonight. Katheiser's displeasure was apparent when I got on the phone with him: I was greeted by the least energetic, most monotone "Hello" I've ever heard.

But Kartheiser warmed up a bit from there as he spoke about the new season, Pete's happiness and his hairline — just don't get him started about the Emmys.

Do you feel like Pete could ever just be happy?

Well, I think he’s had the revelation of having a malcontent personality disorder, but that doesn’t necessarily mean he can change it. I don’t know if he can ever be content. I don’t think that’s really in his genetic makeup, and I think that’s what he realized last year. Just realizing it isn’t going to push him toward happiness. I don’t think that’s the natural progression of things. I think he has a lot of revelations, but very few actual changes.

What would you change about him?

I don’t want him to change. I don’t want him to be a better person, but I want his plans to succeed. I want the things that he’s trying to do in his life to work out. But I’m not looking at him being, “Oh, Pete, why can’t you be a nicer guy?” But I do wish that once in a while, his plan would actually work out. It’d be nice to smile once in a while.

In that scene last year with the prostitute, where she was trying to figure out what Pete wanted and then landed on “You’re my king,” there was something so amazing and simple about that: like, oh, Pete just wants to be in charge.

That’s part of it. But I don’t know if that’s his fantasy — that was just the best of the three that she offered. She offered, “This is my first time, I’m so nervous,” and then she offered some sort of a good housewife thing, which he already has. And of those, that was the best of the three. Is that what he wants? I mean, he has that at his work. I think being with Peggy, I think part of that was about being in charge. So I think that’s the one thing for him, but I don’t think he really knows what he wants. I don’t think there’s a hammer on the head of the nail for Pete, because he doesn’t even know what he wants, he just knows everything he has isn’t it.

You’re not in the first episode very much, but it seemed like there’s a little more comfort and equality with Don than there has been in the past.

Yeah, they’ve been through the ringer with one another. They’ve been against each other, they’ve been with each other, they’ve been back up against each other and then with each other again. And they’re still there. They’re still working hard and they understand each other. It’s like any working relationship: You know someone for five or six or seven or 10 or 15 years, you know their good parts, you know their bad parts. I don’t know if they necessarily respect each other personally. I don’t think Don thinks Pete is a good man and wants to have dinner with him, and I don’t think Pete thinks much of Don either. He thinks Don is a deserter and a coward and basically a liar. But as businesspeople, they get each other and they know the other person’s flaws and the other person’s fortes. So yeah, Pete is more comfortable.  And he feels safe. He doesn’t feel like he’s talking to his boss anymore. He doesn’t feel like he’s going to get fired at any moment.

Your sideburns are longer this season. Did Matt Weiner ask you to grow them out?

Not really. The sideburns was something that I had for the off-season. And then I kept them for the camera test this year.  There was actually no conversation about it. I guess Matt talked to hair and makeup and then they just do what he wants. I’m never really involved in those conversations. I think some of the actors involve themselves, call Matt and say, “This is something I was thinking.” And I’m sure he’s open to those conversations, but it’s not something I do.

Do you discuss other things with him about what’s going on with Pete?

Sometimes I need to understand things so I ask him about it and he’s always open to explain it. Usually when he explains the answer it’s quite obvious. I should’ve known already. But I still ask because I don’t know and it’s something I should know.

How often do you have to have your hairline shaved back.

When you went to the Emmys it was kind of growing in.

Yeah. I just don’t care. I could give a shit what people think about my hairline. I guess I didn’t think anyone even noticed. None of my family said anything to me about it. I don’t think my friends really watch the Emmys. If they did I would really question my friends. If they were watching the Emmys on a Sunday, I’d be like, “Dude, you really need to go get a life.”

How has the experience of being on “Mad Men” affected you?

No, just, like, when you’re wandering around in your life.

Oh, it doesn’t affect my life at all.

You think that’s because of the costumes?

It’s the costumes and also no one’s walking around looking around for the number six on a TV show. I don’t do the covers of the magazines and nobody actually knows my real name. Seriously. Most of the shops I go to in L.A., there’s five or six bigger actors there than me and people actually know who they are. I mean, maybe I’ve been recognized, but nobody has actually come up to me and said anything to me. I’ve never had that experience in my entire life. I’ve been with other people who’ve had it. It must be strange.

Well, thanks for talking with me.

Thank you so much for putting up with me on a Saturday.