You don't have to send the Thatcher or Rick Warren family a card. But how about this: Don't be a hurtful jerk 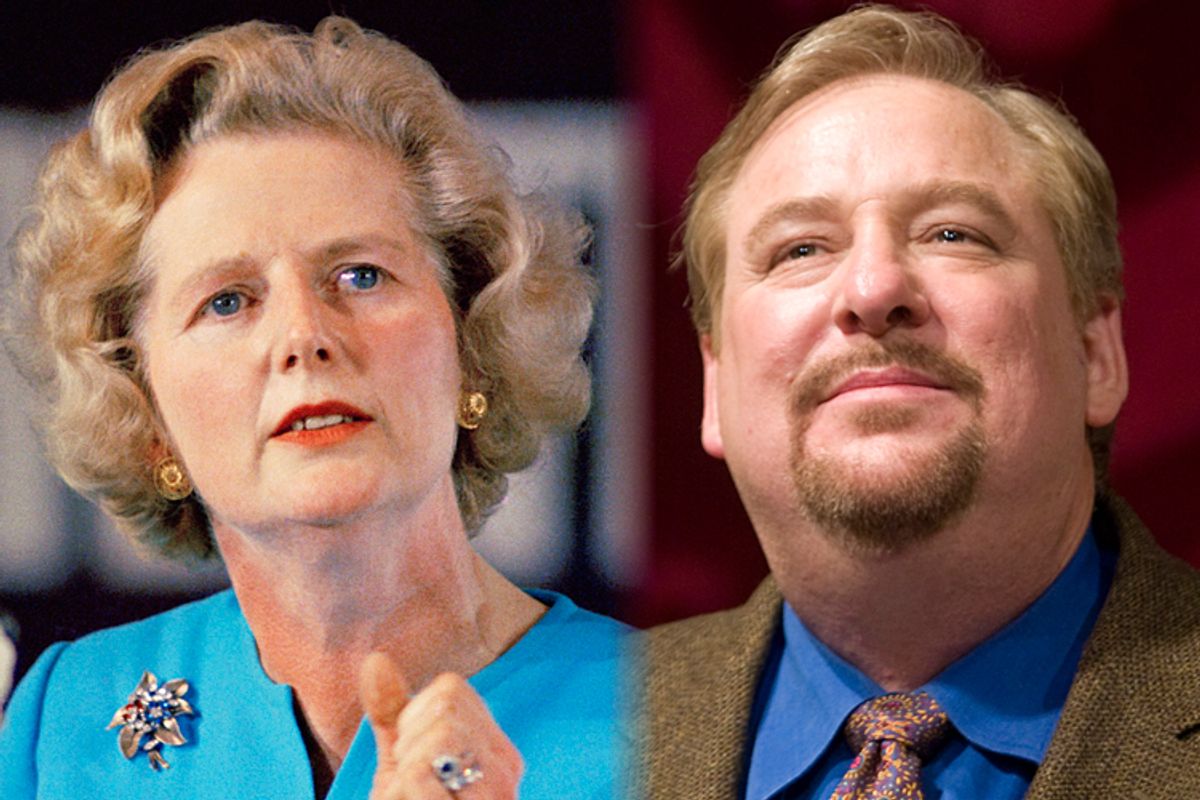 In the face of death, there is an inevitable human impulse to break the tension with some fear-of-mortality-deflating levity. And often, a little tastelessness in the name of the recently departed is really just healthy nose-thumbing at the grim reaper. But when a widely despised individual – or even the offspring of one – dies, the glee can become deafening.

A mere 12 hours after Margaret Thatcher exhaled her last breath Monday, a 75-year-old tune from a musical was on its way to becoming an overnight, chart storming hit. By Tuesday, "Ding Dong! The Witch Is Dead" had become the biggest, most celebratory way of marking a death since Osama bin Laden helped make "Party in the USA" a mega hit.

The long-awaited death of Thatcher has been greeted with precisely the kind of giddiness the prime minister's critics always vowed they'd display. There have been public celebrations around the U.K., along with an outpouring of unrestrained online commentary. Irish cricketer John Mooney tweeted Monday that he hoped her demise had been "slow and painful" (he later apologized), while South African writer Sentletse noted, "Apartheid supporter Margaret Thatcher dead at last." Former Liverpool Council leader Derek Hatton posted that "I regret for the sake of millions of people that she was ever born." And politician George Galloway was more direct, wishing, "May she burn in hellfires."

I was far from a fan of Margaret Thatcher – a day ago I marked her demise by calling her a grotesque puppet – but I also don't see a whole lot of satisfaction in celebrating anybody's demise. It's not that a person earns automatic respect simply for committing the entirely human act of dying, nor do I agree with former Prime Minister Tony Blair that death requires we "show some respect." I just think Thatcher's death is no cosmic comeuppance – she was a frail, 87-year-old woman who'd spent the past decade living with dementia. I side with the eternally great – and steady foe of everything Thatcher stood for -- Billy Bragg, who wrote Monday that "This is not a time for celebration. The death of Margaret Thatcher is nothing more than a salient reminder of how Britain got into the mess that we are in today ... The only real antidote to cynicism is activism. Don't celebrate -- organize!"

There's another compelling reason for a modicum of restraint after a public figure's death. It's not about the person who's gone -- it's about the ones left behind. Thatcher is survived by her two children and two grandchildren. And while Morrissey may be on to something when he recalled Thatcher on Monday as "a terror without an atom of humanity," I still don't believe anyone's extended family deserves to be subjected to anybody else's desire that her slow and painful death was slow and painful.

Yet family members themselves aren't even immune, in death, to the cheery scorn that reviled public figures attract. When Rick Warren's 27-year-old son Matthew died of a self-inflicted gunshot wound Friday, it didn't take the Twittersphere long to commence rejoicing. "I would have committed suicide too if my dad was Rick Warren," went one typical reaction.

In a letter over the weekend, Warren wrote, "No words can express the anguished grief we feel right now." On Monday, he amended the message with a posting on his Facebook page. "Grieving is hard. Grieving as public figures, harder," he wrote. "Grieving while haters celebrate your pain, hardest." It doesn't matter what you think of Rick Warren, his politically divisive, backward views, or the alarming influence he wields. It takes a special kind of terrible to be a jerk over a father losing his son. Period.

Nobody's saying you have to be sad Margaret Thatcher has shuffled off this mortal coil, or making you send a sympathy card to Rick Warren. Nobody's saying, in fact, that you have to take a single day off from despising either of them. Just don't be a jackass, OK? Few of us will ever attain much power and influence in our lives, but when we're gone all of us will be measured by how we're remembered. And who'd ever want to be remembered as the person who saw a family's loss and celebrated?