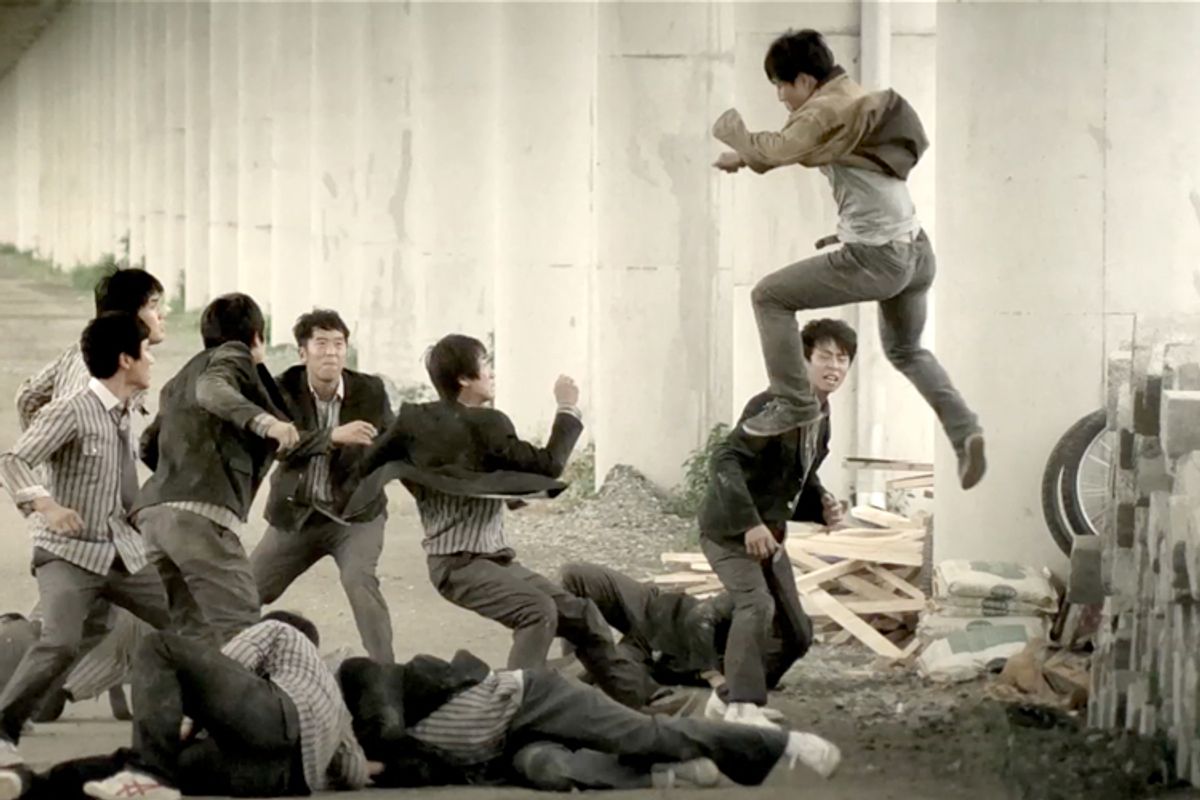 Not to indulge in cultural stereotypes about how Asian movies involve several different genres at once, along with a lot of ass-kicking – but that’s exactly what the overloaded and outrageous Korean martial-arts saga “Fists of Legend” is like. One of the mini-stories of global movie distribution in the last year has been the sudden emergence of Korean pop cinema in the American market, which is partly about the fact that the Asian-American audience is now spread across the continent and partly about the fact that Korean movies tend to draw so heavily on a blend of familiar Western and Eastern references, and aren’t likely to strike anyone as incomprehensible. Like the recent gangland thriller “New World,” “Fists of Legend” will open in numerous cities before moving rapidly to home video.

“Fists of Legend” bears some resemblance to the 2011 Tom Hardy-Joel Edgerton hit “Warrior” – OK, a strong resemblance -- except that there’s a whole lot more of it in all directions. Within the first 15 seconds we see a late-‘80s fight sequence, set in a horizontal landscape beneath a railroad or highway, in which one guy delivers a ferocious beatdown to 14 opponents. A minute later, we’re watching a crazy 21st-century reality show, in which formerly famous street fighters, now ordinary guys in their 30s and 40s, try to withstand two minutes in the ring with a professional martial-arts fighter. The dude who kicked 14 asses is now a pudgy fried-chicken entrepreneur, and rapidly absorbs a horrific pounding, to the delight of the howling crowd and overamped announcers.

All that is just prelude to an extended melodrama about Deok-kyu (the soulful Hwang Jun-min), a middle-aged noodle-shop proprietor and single dad who was once a welterweight boxing prospect during the run-up to the 1988 Seoul Olympics. Director Kang Woo-suk, a prolific craftsman of Korean pop cinema, actually gets Deok-kyu onto the TV show pretty quickly (“the greatest fight show on Earth!”), but as he moves from one battle to the next there’s an immense amount of exposition about how and why Deok-kyu fell off the road to stardom and how his two closest friends and rivals from high school will end up as his TV opponents. So we've got staged mixed martial-arts battles set on TV, before hooting crowds and geysers of sparks, and staged street fights deep in the past, involving goofy fashions and funny haircuts. Most of the movie, fittingly enough, seems to be set to “Eye of the Tiger,” heard over and over again, sometimes in a ridiculous Korean hip-hop-flavored cover version. (Which is not to say the song wasn’t ridiculous already.)

Does all of this add up to a good movie? I dunno – at the risk of sliding all the way into bogus cultural relativism, it depends what you mean. Director Kang doesn’t have the auteurist flair of someone like “New World” director Park Hoon-jung. The fight sequences (choreographed by Jung Doo-hong, who also staged the over-the-top fights in “G.I. Joe Retaliation”) are ingenious and thrilling, but belong to a completely different movie than the earnest teenage, the family weeper and the hard-boiled backstage TV yarn that pad “Fists of Legend” all the way out to 154 minutes. Still, this is a kind of movie American studios don’t even want anymore, one that’s designed to appeal to all possible audience quadrants. Bored by the fight scenes, or the father-daughter angst? Fine – tune out for a while, hit the snack bar and text your friends (in the lobby, please). There’s still plenty of movie to go.

So I think the answer is that no, “Fists of Legend” isn’t a good movie in any classic Aristotelian sense, but it surely doesn’t stint on entertainment value and no possible viewer will be bored by all of it. Most of the acting, especially Hwang in the lead role, Yu Jun-sang as his one-time bad-boy sidekick turned avatar of corporate evil, and Lee Yo-won as the Machiavellian female TV producer, is excellent. There’s twice as much fighting and twice as much melodrama as a normal movie needs, along with an unsustainable parallel to John Woo’s classic “A Better Tomorrow.” And you’ve already been warned about the near-toxic dose of “Eye of the Tiger,” which – rather like this movie – goes all the way into idiotic overload until you finally realize you really, really like it.