Gay marriage advances in France -- and so does hate

Same-sex marriage is approved, yes -- but amid an ugly backlash. Might something similar happen here? 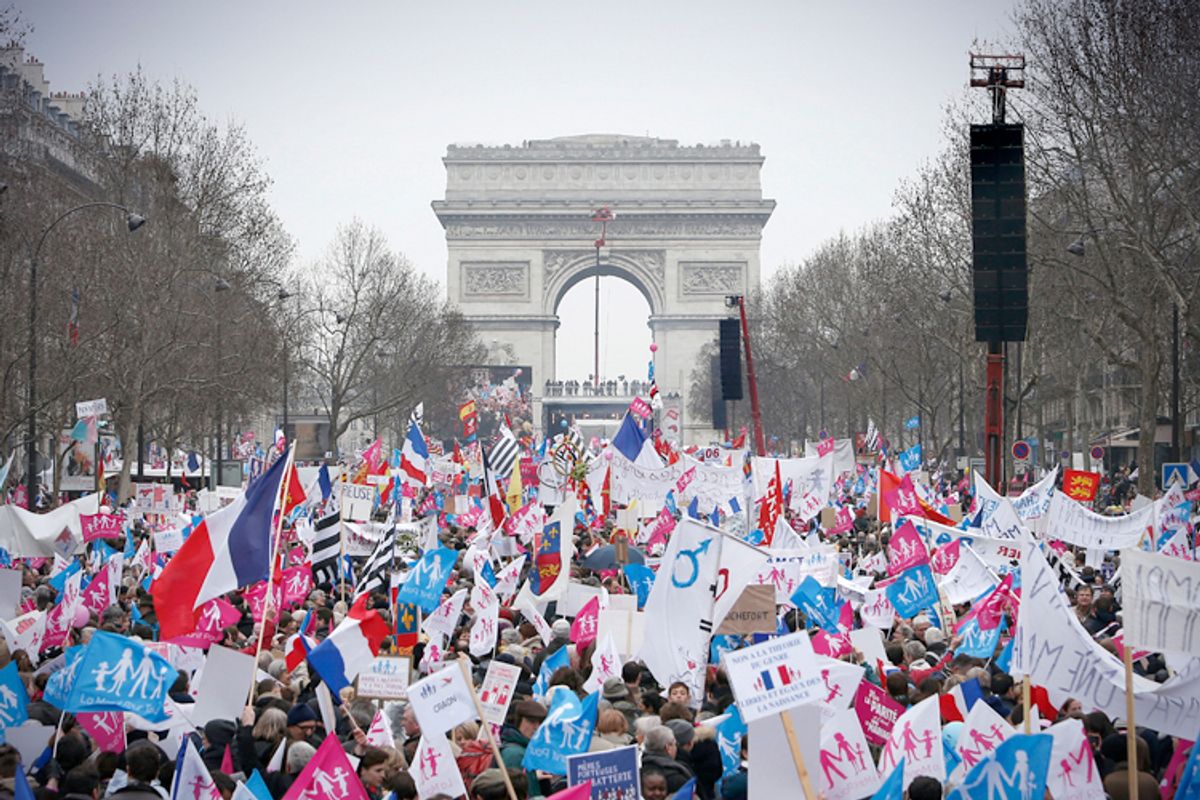 There's nothing like progress to bring out the hardcore haters. They see bigotry melting away, they see people being happy, it drives them crazy. It makes them react.

On Friday, the French Senate voted to approve same-sex marriage and adoption, a move that could bring about full change in the country as early as this summer (civil unions have been legal since 1999). France's justice minister Christiane Taubira, a vocal supporter of the measure, said Friday that the move would strengthen society "by granting the simple recognition of full citizenship to homosexual couples" and  "move our institutions towards ever more freedom, equality and personal respect." Yet conservatives in the French government vowed to continue to fight against the bill, declaring that "nothing is definitive and the debate continues."

The fight over same-sex marriage and family is contentious in France, where a slim majority of between 55 and 60 percent of the population support marriage equality -- and only half support adoption rights for gay couples. In January, 340,000 protestors rallied in Paris to fight the measures toward LGBT equality. And this week, a brutal hate crime on a gay man who'd been walking down a Paris street with his boyfriend made headlines around the world. When the victim, Wilfred de Bruijn, posted the image of his bruised, bloodied face on his Facebook page, he overnight became a global symbol of the ongoing divisiveness over LGBT rights, and how woefully far we still have to go.

Sadly, his appears to have been far from an isolated incident. Elizabeth Ronzier, head of the French activist group SOS homophobie told Raw Story this week there has been a 30 percent increase in reports of homophobic and transphobic assaults in the past two years. As the debate over marriage has come to a head, she says, "In the two months to the end of February this year, we received the same amount of testimonies that we would normally get over a period of six months."

It's a tension that's also notable here in the U.S. Though a growing majority of Americans support marriage equality, opposition is also swelling. A recently MSNBC report reveals that 66 percent of Republicans say they're against marriage equality – up three percent since just December.

The homophobes will dig in their heels and fight. They will lash out and they will attack. They will hurt people and they will need to be punished mightily for it. But they will lose. History is being made, all across the globe, and it can't be stopped now. In speaking of the victory today, Christiane Taubira referred the motto of her nation, saying it "is an act of freedom, it is an act of equality, and it is an act of brotherhood."