Reebok dumps Rick Ross for lyrics "misinterpreted" about sexual assault. Is this setting a dangerous precedent? 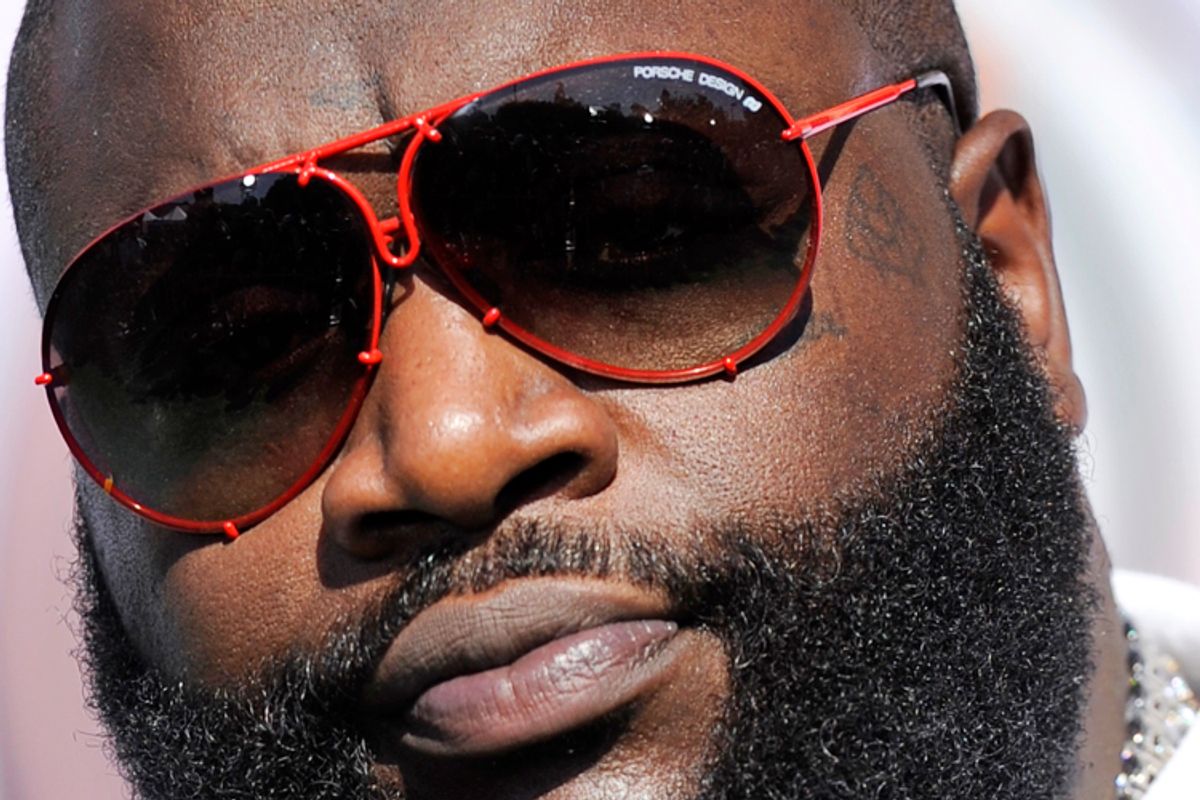 Guess Rick Ross' assurances that he doesn't "condone" rape were not enough for him to keep his gig as a sneaker salesman. Late Thursday, Reebok announced it was dumping him as a spokesman.

The song has been scrutinized ever since writer Rosa Clemente noted the "problematic" line last month on her YouTube channel. Soon after, Ross told New Orleans radio station Q 93.3, "I would never use the term 'rape' in my records and as far as my camp … Nobody condones that. So I just wanted to reach out to all my queens that’s on my timeline, all the sexy ladies, the beautiful ladies that have been reaching out to me with the misunderstanding: We don’t condone rape, and I’m not with that. I want to make sure this is clear, that woman is the most precious gift known to man. It was a misunderstanding with a lyric, a misinterpretation where the term rape wasn't used."

Last week, the women's group UltraViolet scheduled a protest outside Reebok's flagship New York store, prompting Ross to reiterate via Twitter, "I dont condone rape. Apologies for the #lyric interpreted as rape…. Apologies to my many business partners, who would never promote violence against women." [sic]

But apparently, the sexy, beautiful, precious-gift-to-man ladies at Reebok's corporate headquarters – and their male counterparts – saw things a little differently. The company issued a bizarre, butt-covering statement Thursday that "Reebok holds our partners to a high standard, and we expect them to live up to the values of our brand. Unfortunately, Rick Ross has failed to do so. While we do not believe that Rick Ross condones sexual assault, we are very disappointed he has yet to display an understanding of the seriousness of this issue or an appropriate level of remorse. At this time, it is in everyone's best interest for Reebok to end its partnership."

Ah, if only he'd been more "appropriately" remorseful.

There's no denying that "U.O.E.N.O." sure seems to make sexual assault sound like just another Saturday night good time. Ross' subsequent comments also betray a remarkable lack of comprehension regarding their interpretation. Then again, he also claims in the song to have "a hundred rounds in this AR," as well as a spaceship, so he may not have meant to be taken quite so literally.

There was a time when you could write a song about drugging and raping a lady and have yourself a classic on your hands. As Stephen Deusner wrote in Salon last Christmas, Frank Loesser's holiday classic duet "Baby, It's Cold Outside" features a "he’s a predator and she’s prey" dynamic that includes a woman saying "The answer is no" before wondering, "Say, what's in this drink?" More explicitly, have you ever listened to the words of "Excitable Boy" or "Brown Sugar"? Because, wow. And Ja Rule and Ashanti's insanely dysfunctional "Always On Time" features the plea that "love is about pain so stop the complaints and drop the order restraints" before segueing into an admission about the hoes he keeps "drugged up off that ecstasy."

Ross can say he doesn't condone rape all he wants, but it doesn't change that "U.O.E.N.O." contains a line blatantly celebrating it. The question is – how is it different from plenty of other songs, spanning decades of pop music, that also reference sexual coercion and force? Music is not nonfiction. It's a fantasy. If Eminem boasts that "Dre's dead, he's locked in my basement!" does that mean we should take him at his word?

I don't like Ross casually bragging about rape and still seeming to not understand that he is writing about rape. But I also seriously question whether expressing dark, morally repulsive acts should be automatically verboten. And though Ross was ostensibly dropped by Reebok for the line about abusing a woman, I've got to wonder if the company would have cared so much had it not come immediately after his blatant product placement declaration that "I die over these Reeboks." And I wonder if the problem wasn't so much that what Ross wrote was bad -- or merely bad for business.