Investigators reveal the explosive devices were packed with shards of metal, nails and ball bearings 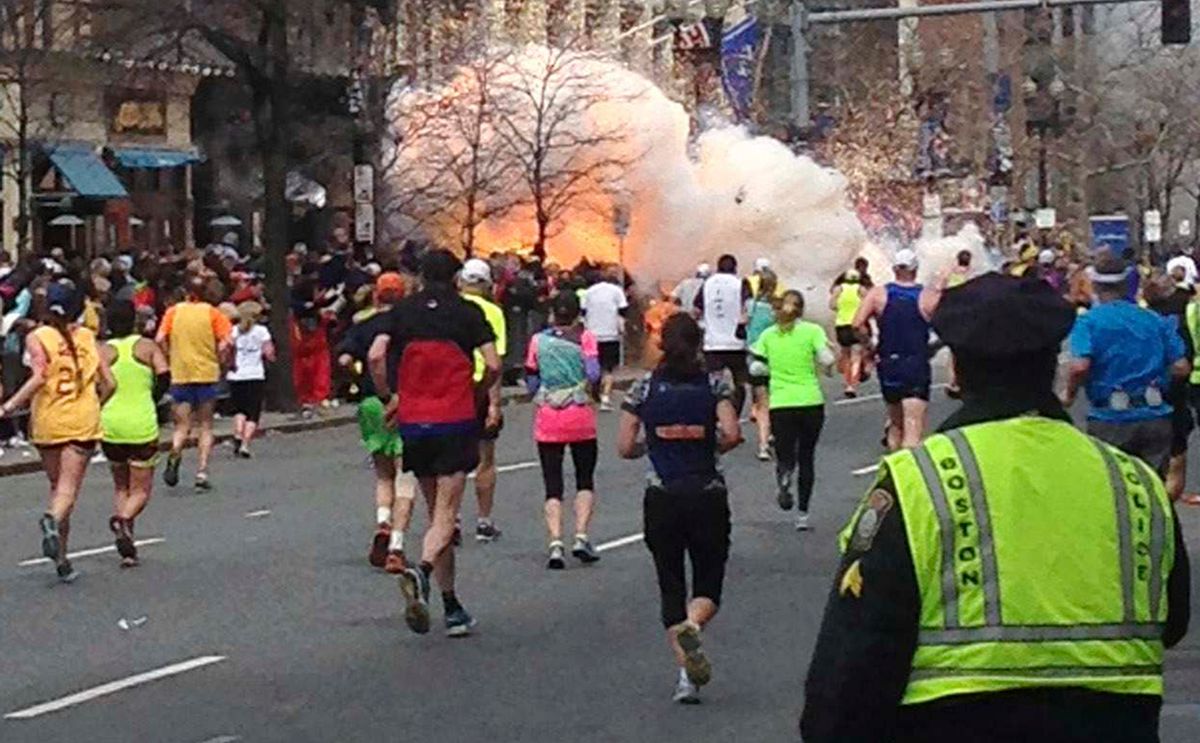 BOSTON (AP) — The two bombs that ripped through the crowds at the Boston Marathon, killing three people and wounding more than 170, were fashioned out of pressure cookers and packed with shards of metal, nails and ball bearings, a person briefed on the investigation said Tuesday.

The details on the apparently crude but deadly explosives emerged as investigators appealed to the public for amateur video and photos that might yield clues, and the chief FBI agent in Boston vowed "we will go to the ends of the Earth" to find those responsible.

A person who spoke on the condition of anonymity because the investigation was still going on said that the explosives were put in 6-liter pressure cookers, placed in black duffel bags and left on the ground. They were packed with shrapnel to inflict maximum carnage, the person said.

The person said law enforcement officials have some of the bomb components but do not yet know what was used to set off the explosives.

A doctor treating the wounded appeared to corroborate the person's account, saying one of the victims was maimed by what looked like ball bearings or BBs. Doctors also said they removed a host of sharp objects from the victims, including nails that were sticking out of one little girl's body.

At the White House, meanwhile, President Barack Obama said that the bombings were an act of terrorism but that investigators do not know if they were carried out by an international organization, domestic group or a "malevolent individual."

He added: "The American people refuse to be terrorized."

"They can give me a cavity search right now and I'd be perfectly happy," said Daniel Wood, a video producer from New York City who was waiting for a train.

Similar pressure-cooker explosives have been used in Afghanistan, India, Nepal and Pakistan, according to a July 2010 joint FBI and Homeland Security intelligence report. Also, one of the three devices used in the May 2010 Times Square attempted bombing was a pressure cooker, the intelligence report said.

"Placed carefully, such devices provide little or no indication of an impending attack," the report said.

The Pakistani Taliban, which claimed responsibility for the 2010 attempt in Times Square, has denied any role in the Boston Marathon attack.

The two bombs blew up about 10 seconds and around 100 yards apart Monday near the finish line of the storied, 26.2-mile race, tearing off limbs, knocking people off their feet and leaving the streets spattered with blood and strewn with broken glass. The dead included an 8-year-old boy.

"We started grabbing tourniquets and started tying legs. A lot of people amputated," said Roupen Bastajian, a state trooper from Smithfield, R.I., who had just finished the race when he heard the explosions.

Federal investigators said no one had claimed responsibility for the bombings, which took place on one of the city's biggest civic holidays, Patriots Day.

"We will go to the ends of the Earth to identify the subject or subjects who are responsible for this despicable crime, and we will do everything we can to bring them to justice," said Richard DesLauriers, FBI agent in charge in Boston.

He said investigators had received "voluminous tips" and were interviewing witnesses and analyzing the crime scene.

Gov. Deval Patrick said that contrary to earlier reports, no unexploded bombs were found. He said the only explosives were the ones that went off.

FBI agents searched an apartment in the Boston suburb of Revere overnight, and investigators were seen leaving with brown paper bags, plastic trash bags and a duffel bag. But it was unclear whether the tenant had anything to do with the attack.

A law enforcement official who spoke on condition of anonymity because he was not authorized to release details of the investigation said the man had been tackled by a bystander, then police, as he ran from the scene of the explosions.

But he said it is possible the man was simply running away to protect himself from the blast, as many others did.

At a news conference, police and federal agents repeatedly appealed for any video, audio and photos taken by marathon spectators, even images that people might not think are significant.

"There has to be hundreds, if not thousands, of photos and videos" that might help investigators, state police Col. Timothy Alben said.

Boston Police Commissioner Edward Davis said investigators also gathered a large number of surveillance tapes from businesses in the area and intend to go through the video frame by frame.

"This is probably one of the most photographed areas in the country yesterday," he said.

Dr. Stephen Epstein of the emergency medicine department at Beth Israel Deaconess Medical Center said he saw an X-ray of one victim's leg that had "what appears to be small, uniform, round objects throughout it — similar in the appearance to BBs."

Eight-year-old Martin Richard was among the dead, said U.S. Rep. Stephen Lynch, a family friend. The boy's mother, Denise, and 6-year-old sister, Jane, were badly injured. His brother and father were also watching the race but were not hurt.

A candle burned on the stoop of the family's single-family home in the city's Dorchester section Tuesday, and the word "Peace" was written in chalk on the front walk.

Neighbor Betty Delorey said Martin loved to climb the neighborhood trees, and hop the fence outside his home.

The Boston Marathon is one of the world's oldest and most prestigious races and about 23,000 runners participated. Most of them had crossed the finish line by the time the bombs exploded, but thousands more were still completing the course.

The attack may have been timed for maximum bloodshed: The four-hour mark is typically a crowded time near the finish line because of the slow-but-steady recreational runners completing the race and because of all the friends and relatives clustered around to cheer them on.

Davis, the police commissioner, said authorities had received "no specific intelligence that anything was going to happen" at the race. On Tuesday, he said that two security sweeps of the route had been conducted before the marathon.

The race winds up near Copley Square, not far from the landmark Prudential Center and the Boston Public Library. It is held on Patriots Day, which commemorates the first battles of the American Revolution, at Concord and Lexington in 1775.

Richard Barrett, the former U.N. coordinator for an al-Qaida and Taliban monitoring team who has also worked for British intelligence, said the relatively small size of the devices in Boston and the timing of the blasts suggest a domestic attack rather than an al-Qaida-inspired one.

"This happened on Patriots Day — it is also the day Americans are supposed to have their taxes in — and Boston is quite a symbolic city," said Barrett, now senior director at the Qatar International Academy for Security Studies.