CNN reported that a Boston bombing suspect was in custody, followed by Fox and AP. Here's how it all went wrong 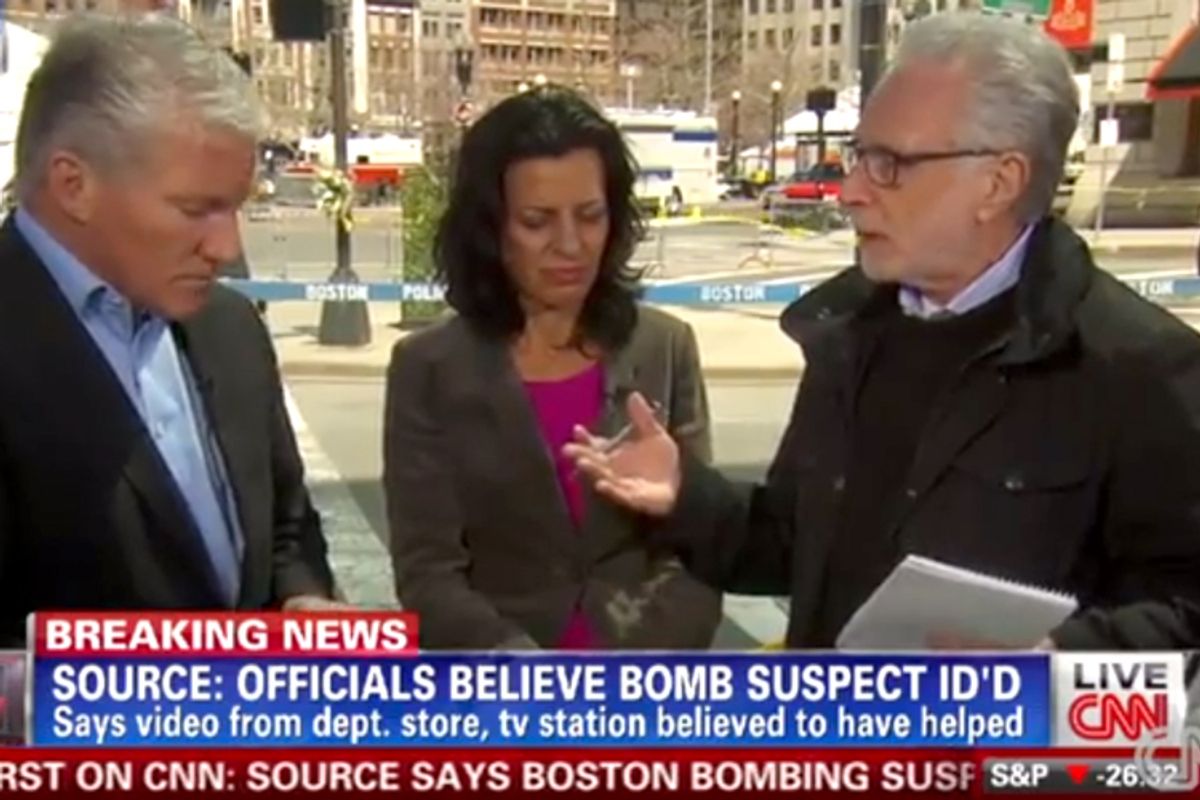 At 12:04 p.m., CNN's Breaking News Twitter broadcast that a "suspect" in the bombing of the Boston Marathon had been "ID'd."

This scoop was credited to CNN reporter John King, who, as of this writing, is not on air. Less than an hour later, CNN declared there had been an arrest.

Other news outlets chased CNN, with the Associated Press and Fox News reporting a similar story shortly after 1 p.m. in each case.

But by 1:43, CNN had cited the Department of Justice and Boston Police Department in their claim that no arrest was made.

CNN's tweets about the events in Boston today link to a liveblog whose URL ends "source-arrest-made-in-boston-bombing/." King's reporting for CNN, preserved in the liveblog, indicates that the police "identified a suspect based on an analysis of video from a Lord & Taylor department store near the site of the second blast, and that video from a Boston TV station also helped."

The news network walked back its reporting shortly after NBC News, among other news outlets, declared there had been no arrest.

In the process of walking the claim back, though, CNN refused to fully retract its story, acknowledging the Department of Justice's claims but writing in its liveblog at 1:46: "An arrest has been made in connection with Monday's Boston Marathon bombings, sources tell CNN's John King and CNN contributor Fran Townsend."

At 2 p.m., under close scrutiny due to conflicts with other news sources, CNN dug in its heels, continuing to reiterate details of King's reporting: "The arrest is based on two videos showing images of the suspect, a federal law enforcement source told CNN contributor Fran Townsend." CNN's Piers Morgan, not on air, acknowledged the error, while contributor Fran Townsend, who'd reported the erroneous news, cited a "misunderstanding."

At 2:23, the network's reporting had become the story. "As news of an arrest spreads, a crowd has been gathering outside a federal courthouse in Boston," wrote the CNN liveblog. (That courthouse has since been evacuated.)

Meanwhile, the Boston Globe has floated a claim that a suspect may or may not have been arrested: "While a source told the Globe that a person had been taken into custody and other news organizations reported the same, based on their own sources, the US attorney’s office, the FBI, and Boston police issued statements saying no one had been arrested."

CNN, which misreported the Supreme Court verdict on Obamacare last year, has come under fire for having been the first to misreport an arrest, and potentially to have driven erroneous coverage. Fox News has rewritten its story as "DEVELOPING" and acknowledging its reporting flies in the face of FBI and Boston Police statements.

The Associated Press wrote: "The official who spoke to the AP did so on condition of anonymity and stood by the information even after it was disputed. A news briefing was scheduled later Wednesday."

The venerable news network has defended itself, with a spokesman saying CNN "adjusted our reporting" as soon as new information became available.

As of this writing, Chris Cuomo is standing in Boston, reporting on a Texas murder trial. He's reporting that a suspect has been arrested.