Empathy for Boston, from Iraqi children 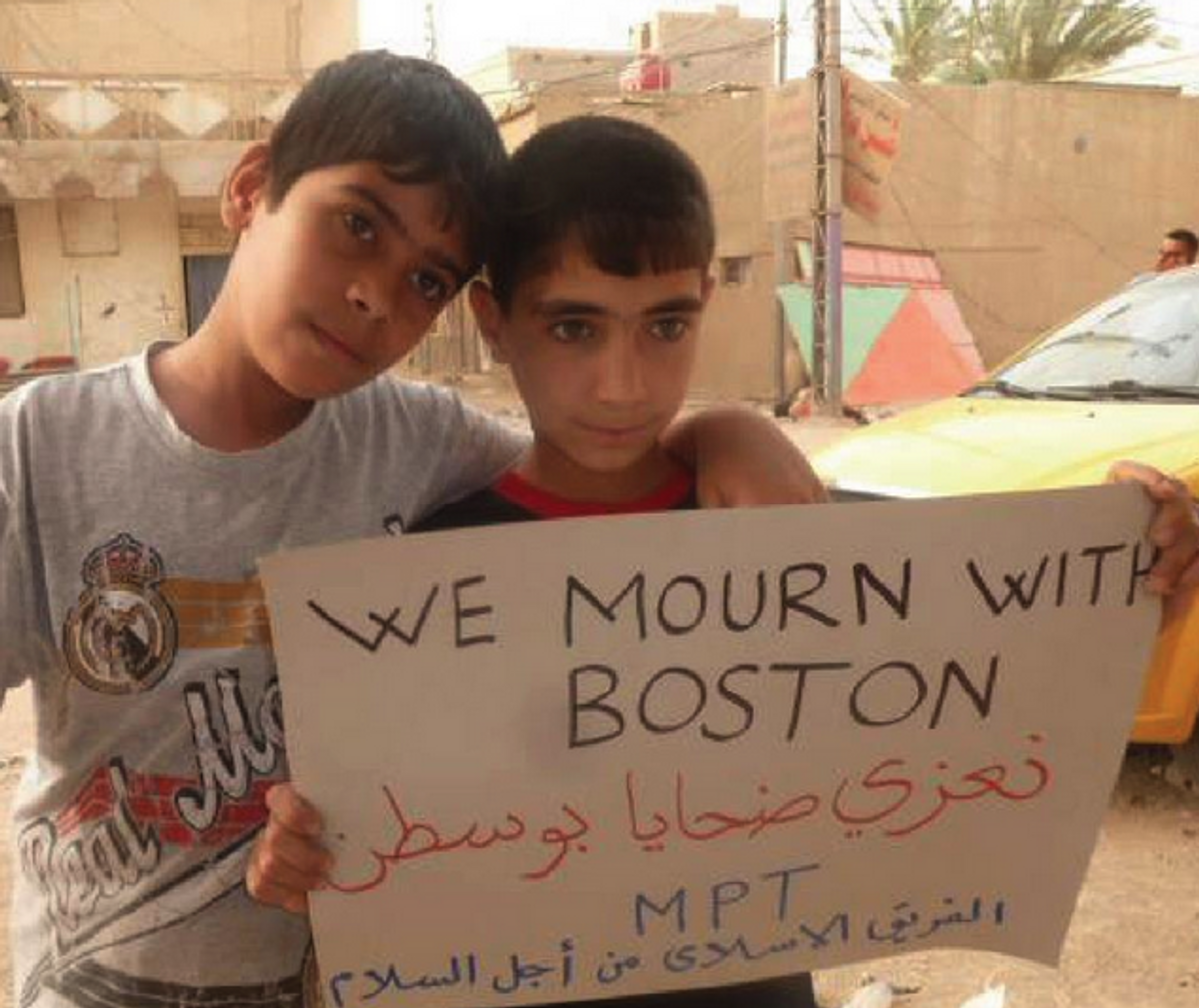 This piece originally appeared on firedoglake.com.

On April 15, 2013, in Boston, three people were killed when two bombs exploded at the Boston Marathon. Over 144 were wounded. Doctors performed at least 10 amputations on those injured.

The same day, in the cities of Baghdad, Fallujah and Kirkuk in Iraq, there were “serial blasts.” Fourteen car bombs and three roadside bombs went off. Thirty-three people were killed and over 160 were wounded.

The two boys understand far too well what it is like in the immediate aftermath of a terror attack. In their lives, there has been numerous acts of violence as a result of terrorism and U.S. forces waging war and occupation.

The boys not only stand in solidarity with the victims of the Boston explosions, but they also empathize because this is what they’ve experienced. Part of this message is being shared with Americans because they want them to know they understand the pain Americans are going through.

In Iraq, bombings are too regular to be news events, which U.S. pundits and news crews respond to by flying to the location of the attacks. They also are happening over there, not here.

Few Americans ever stand up and snap a photo when bombs went off in Iraq. They rarely show solidarity with citizens of other countries that are feeling deep pain from violence. They wish, after events like this, that people recognize, “We Are All [the Name for People in That City Just Attacked],” when residents of U.S. cities are hit by attacks. People stand up and say things like, “We are all Bostonians today,” and, perhaps, there is a part of these Iraqi boys that would like to see that from the world.

America is, also, one of the greatest purveyors of violence. The political motivations behind this state-sponsored violence that we call counterterrorism or warfare can be just as hard to justify as the violence that kills people in terror attacks in America. The sadness that an event like a marathon would be disrupted should be coupled with reality that there are people in countries like Afghanistan, Pakistan, Iraq, Yemen, etc., who embark on daily errands and are swept up in violence.

These others are willing to show empathy toward us in tragedy. What if Americans could follow the boys’ example and acknowledge the victims of bombings in other countries daily? What if every now and then more individuals posted photos showing empathy with others impacted by violence?

One can be cynical and offer a snarky retort, or one can brush this off as left-wing hippie nonsense, but it’s a rhetorical question that the two Iraqi boys in the photo should force all Americans to confront.

We are all citizens of the world, and our pain can bring us together.