The worst episode of "Newsroom" has become prescriptive and culturally omnipresent 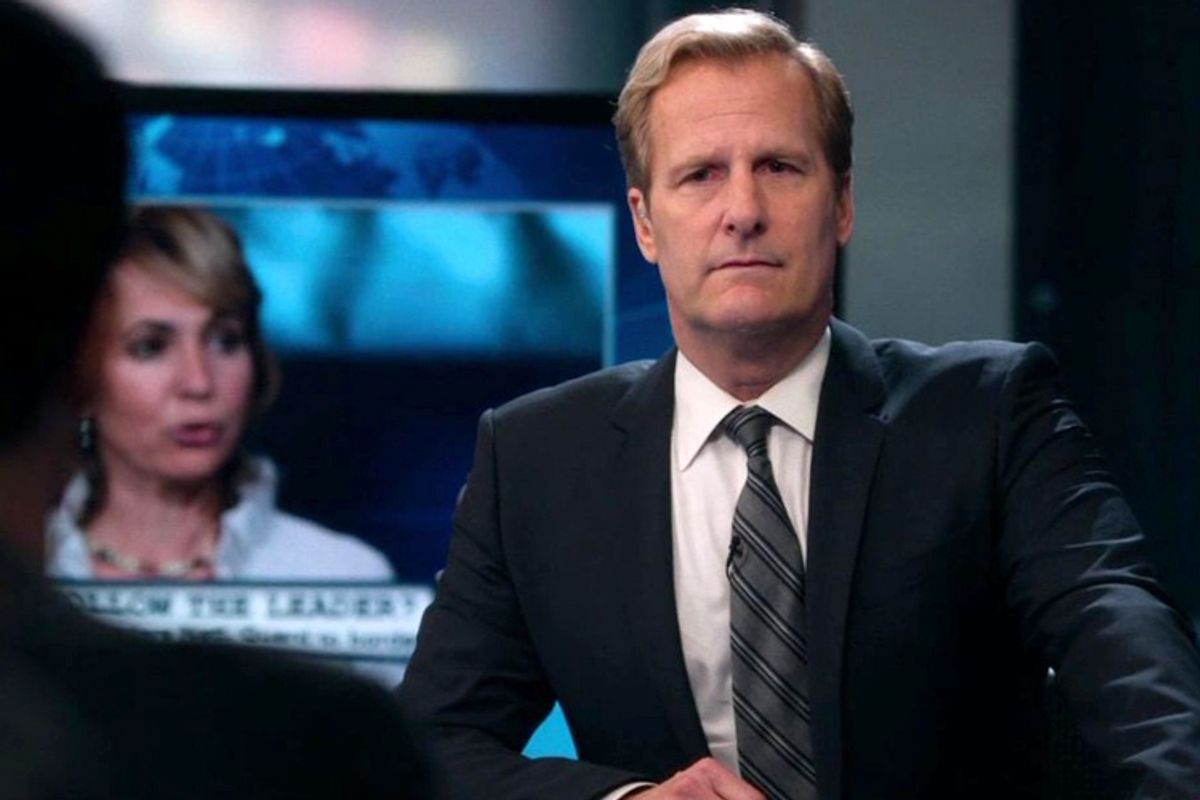 Last July, the most widely ridiculed episode of Aaron Sorkin’s “The Newsroom” aired. Titled “I’ll Try to Fix You,” it climaxed with the shooting of Gabrielle Giffords. The staff of “News Night,” assembled at the office on a Saturday, quickly went into action, as the sound of Coldplay’s “Fix You” began to play on the soundtrack. Other news agencies— NPR, and then Fox, MSNBC and CNN— began to report that Giffords was dead. The crass head of ratings stormed into the newsroom and demanded that the “News Night” team “call” Giffords’ death: “Every second you’re not current a thousand people are changing the channel! That’s the business you’re in,” he shouted, looking to his typical ally, the cynical producer Don, for support. Don didn’t provide any: “She’s a person. A doctor pronounces her dead, not the news,” he said. Jeff Daniels’ Will McAvoy then made the righteous choice, deciding not to announce Giffords’ death on air, but to stick to the facts. Seconds later, word came that Giffords was alive and headed for surgery. The “News Night” team, virtuous resistor of peer-pressure, had made the right call. The Coldplay swelled.

This segment cemented what was so noxious about “Newsroom,” overwrought self-importance and self-righteousness papered over with cheese-ball sentimentality. (Coldplay, really?) The episode made the most important aspect of Gabrielle Giffords’ shooting a fictional cable news show: as Esquire put it when the episode aired,  “Sorkin isn't interested in the story of Gabby Giffords, per se, much less in the six people who died that day, who don't rate a mention here. He has a meta-journalism point to make.” And the tone in making that point was supremely grandiose, as if a make believe news crew, with hindsight and a script from Aaron Sorkin, really were “saving” the news.

But in the nine months since “I’ll Try To Fix You” aired, something strange has happened: while still mocked, the episode has become prescriptive and culturally omnipresent. Every time one of the cable news networks disseminates wrongful information — as CNN did yesterday when it reported a “dark skinned” suspect had been taken into custody in the Boston bombings only to spend an hour walking that particular untruth back— twitter fills up with jokes about “The Newsroom.” Every time the cable networks mess up in the way— as they did by IDing Ryan Lanza as the shooter at Newtown, as they did yesterday, as they did before "Newsroom" ever aired with the botching of Affordable Care Act decision  — we now describe it, even as we sneer, in terms of "The Newsroom." “My Twitter feed just wrote an episode of The Newsroom,” someone tweeted yesterday.

“I’ll Try To Fix You” has become like Tracy Flick or the phrase “Leaning in," cultural shorthand for a phenomenon that, before it existed, we had to use lots of other words to describe. Before Tracy Flick, what exactly did we call a super intense, competitive, relentless cheery, scary-bright woman whose will-to-power we admired but also put us off? Did we call her that mouthful? “Leaning in” may not become the social movement Sheryl Sandberg hopes, but we'll be using that phrase to describe women committing to their careers even as they have children and families long after her book is off the bestseller list. Yesterday, not for the last time, the cable networks totally Newsroomed it. Aaron Sorkin’s “I’ll Try to Fix You" may be vainglorious, but it’s got legs and a point. Each time the networks stumble like this, the episode feels a little more prescient, still over the top, but for a righteous cause. Maybe CNN should consider blasting Coldplay into its offices.