What it would be like to live in violence 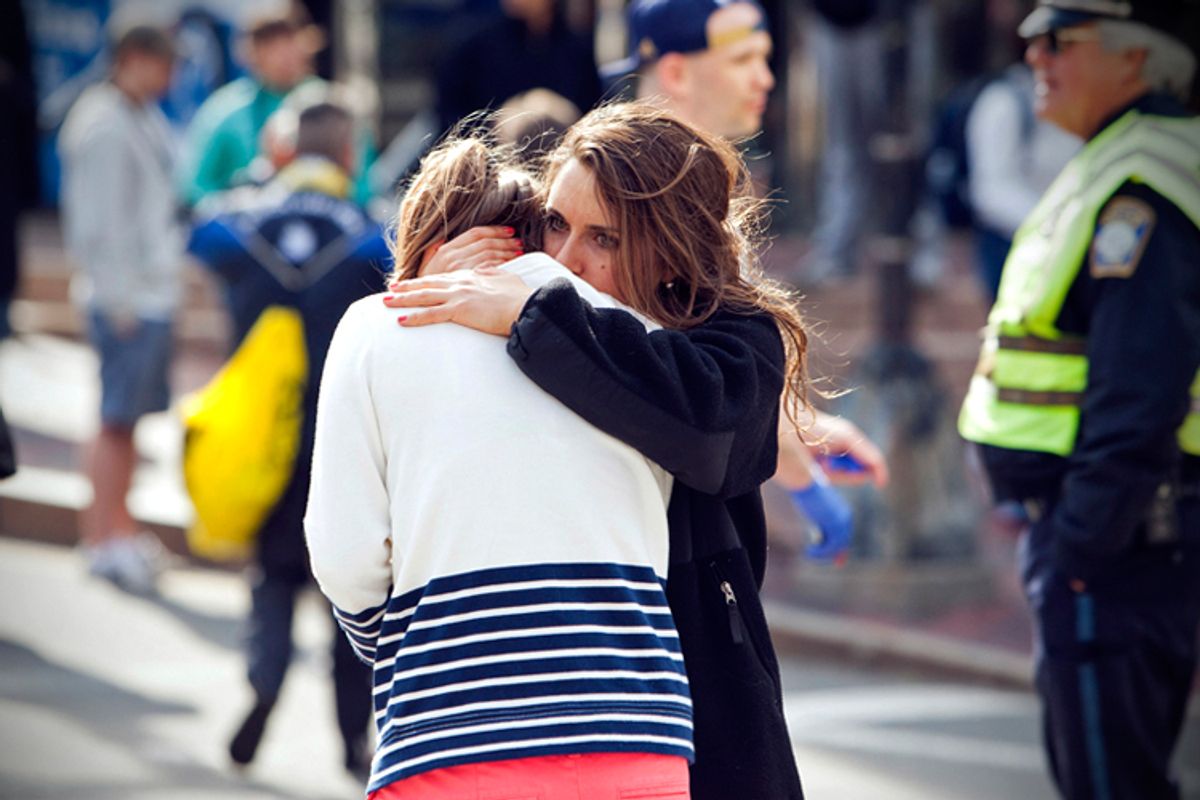 A version of this post originally appeared on NosyGirl.

I live in Cambridge, Boston's neighbor to the north, and my proximity to that city and the appalling act of terrorism during Monday's marathon have me thinking a lot about empathy this week, as I struggle with the limitations of my own. Even as I resist the urge toward tribalism ("We're all Bostonians today" vs. We're all humans all of the time), I won't deny the desperate But this is our home! We LIVE here! feeling that comes straight out of fear. It is a feeling born of nearness to calamity, but that, of course, is felt by anyone living under threat of violence, be it infrequent or constant.

On the phone, talking about the bombings with worried loved ones living far away, I bristled at a question I have myself posed in the past and contemplate with some regularity: "God, can you imagine living in a place where this happened all of the time?" No. I haven't the first idea what that would be like, and I acknowledge the sheer dumb luck of that. As my dear and brilliant friend Preeta Samarasan says, “So often we say to each other, ‘I can’t imagine,’ when really what we mean is that we don’t want to, that imagining would be unbearable.” For a moment this week, some of us didn't have to imagine quite so much.

That is the work of empathy, that distance to whatever vividness we are able, or willing, to imagine. The feeling is — while "easy" is the wrong word, "automatic" fits. We know the urgency of grief or fear when it is our own, the strange shock of people driving their cars to the grocery store, the disbelief that any of these things — food, vehicles, other humans and their daily lives — should still exist in the face of our loss. But I was surprised by the degree to which I felt the social-media version of this dizziness on Monday, staggered that other people were still wrapping things in bacon, winning Pulitzers, and, most important, asking me to remember this feeling when next I read about a drone strike. Thomas Page McBee, writing for the Rumpus, explains why the animal in me wanted comfort first:

The first step in containing the potential for trauma is safety. The second is to welcome the injured and fearful, the grief-stricken and the shocked back into the fold. This is animal logic—trauma research has found that prey animals, upon escape, need to rejoin the group and discharge their nervous energy, the stress hormones that kept them alive.

Once we’ve accounted for our own pack (with the recognition that such violence means this is not possible for everyone), and shed some shock thanks to the warmth of our fellow mammals, then we must do the work of traversing the gap between the urgency of our own feelings and the remove with which we are able to understand a bomb in a far-off place, perhaps dropped from a plane bearing our own country’s insignia. The work is holding this version of empathy in our minds — this sick-smelling sweat, these clouds of smoke, these ceaseless sirens — rather than the soft-click brand that is far more typical of my days spent “liking” and “sharing,” engaging even with comments only occasionally, but very rarely calling up this same rage in any of its sensory agony. Glenn Greenwald’s piece in the Guardian is essential reading on the matter:

[Whatever] rage you're feeling toward the perpetrator of this Boston attack, that's the rage in sustained form that people across the world feel toward the US for killing innocent people in their countries. Whatever sadness you feel for yesterday's victims, the same level of sadness is warranted for the innocent people whose lives are ended by American bombs. However profound a loss you recognize the parents and family members of these victims to have suffered, that's the same loss experienced by victims of US violence. It's natural that it won't be felt as intensely when the victims are far away and mostly invisible, but applying these reactions to those acts of US aggression would go a long way toward better understanding what they are and the outcomes they generate.

But what of the outcomes we may generate not from our acts of aggression, but through our empathy? The Americans who make up my self-selected tribe are people who feel deeply, empathize with their whole hearts, and hate the fact that violence is committed in their name. This pack includes people who stood near enough to smell and hear and feel the terror of Monday’s explosions but who did not hesitate to connect their own feelings of helplessness with the plights of people they have never ridden together with on a train.  What good are their enormous hearts? Is it enough to hope that they nudge a loved one a step further along the spectrum of compassion? That, in their sharing, they might afford a family member a more complicated understanding of words like “evil” and “freedom”? That they try with all they have to stand for one moment inside another's suffering, and let it connect them to, rather than close them off against, other people?

I'm grateful to the friends who keep me from stagnating on that spectrum of compassion, who always challenge me to be less myopic in what I allow to break my heart. I thank writers for that, too. One such writer-hero is Zadie Smith, who has this to say about empathy:

In the end, empathy is a very limited emotion. Here in the West we romanticize its power — especially in literature! — but the truth is empathy gets turned on and off as needs be. My own feeling is you need to legislate for it, to encourage people into its practice — to enforce it, if need be. Perhaps all those Wall Street bankers were perfectly nice people, too, who didn’t mean to hurt us as they did, but we shouldn’t rely on the vagaries of human personalities. Desperation, weakness, vulnerability — these things will always be exploited. You need to protect the weak, ring-fence them, with something far stronger than empathy.

I'm certainly guilty of romanticizing the power of empathy, especially as it is generated by stories. And of course we need to turn it off and on; we can’t walk around shattered all of the time, open empathic wounds. We probably can’t even sustain the bit of extra tenderness toward one another that I noticed in my everyday interactions on Tuesday, and there’s a part of me that will be grateful when my neighbors go back to being gruff, even as it indicates we’ve moved beyond the instinctive empathy generated by our terrible shared experience.

But let’s say we could sustain it, enlarge it, actually bottle even just a tiny bit of our rage, despair and tenderness to take out and get a whiff of when next we read the news. What then? How do we use our empathy? What can it do? These are not rhetorical questions. As a writer, I subscribe wholly to the notion that empathy is our most essential human trait, that the nurturing of it among others and within ourselves is one of the best ways we can be of use. Of what use?

Elizabeth Ames Staudt is a fiction writer, currently at work on her first novel. She started the website Nosy Girl in the hopes of learning more about smell and the stories people tell about it.