The sprinting, sloppy TV news coverage of the Boston manhunt

The false need for speed 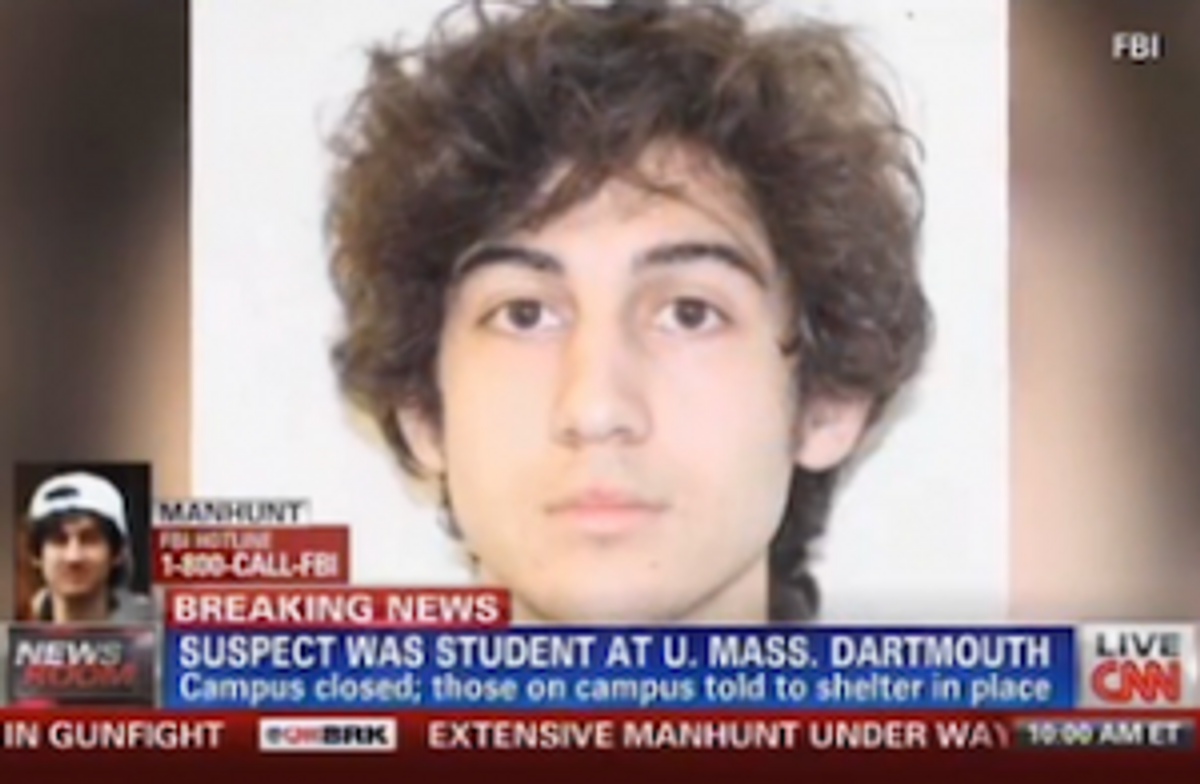 If you woke up after 7:30 EDT this morning, there have been no new developments in the manhunt for Dzhokhar A. Tsarnaev, the white-hat-wearing 19-year-old suspect in the Boston bombing, since you got out of bed. If you have been following the story closely on television — or Twitter — it most certainly feels like this could not be the case. Over the past nine hours, news coverage has been in a flat-out sprint, continuous and unending, huffing and puffing to supply us with the latest news when there is no new latest news. The news networks are treading water but trying to make it look like they are free-styling by hysterically flailing their arms in a forward motion. At one of the rare moments when there is a huge, breaking news story, TV news is having just as rocky, sloppy and manipulative a time filling its schedule as when it is struggling to find stories to cover. How can this be?

To begin, they have too much time to fill. Watching this story unfold, the advantage of being a news website — an entity that is structured to run content when content needs to be run and that is not forced to run content 100 percent of the time — is clear: It’s pure quality control. Many of the misreportings in the past few days occurred because the networks were going too fast, trying so desperately to get a scoop that they did not source those scoops appropriately. But there has been lots of less-damaging idiocy as well, most of it in the form of the “speculation” that the news programs keep saying they don’t want to do. By keeping up the self-important charade that they are “breaking news” every minute, rather than calmly monitoring a developing situation that will, at some future point, become breaking again, they are going fast and thoughtless.

Probably the most telling sequence of the day came earlier this morning on CNN, when an on-air reporter insisted the network cut to her because something was most definitely going on. “We smell smoke, people running to the center, cars going straight, cars turning to the right,” she said, her voice straining with urgency, as a caravan of dark SUVs sped by. “Something has just happened. Police officers are running, we have a dog, a dog that’s on its way. Interesting, that dog is barking. Whether that’s a canine, we don’t know.” This is what the news has been like: reporters and producers focused on finding and transmitting action, even if that action is meaningless or indecipherable. In the rush to give the audience something new, CNN airs an Urgent News Report about a dog — excuse me, a possible dog — barking.

And what is the frenzy for? So we don’t turn the channel? In moments like this, we are as captive an audience as we ever will be. (Again: In national crises, TV news is like a waiting room; you don’t want to be there, but it's an emergency, and you can’t really be anywhere else.) So slow down. Be informative. Repeat yourself. Re-air what’s interesting if there’s nothing else to say. Pete Williams over on NBC has been praised today for being calm and comprehensive and methodical, and for not stating more than he knows. This really is in contrast to many of the other reporters and anchors who, even as they exude gravitas, are conducting interviews like they are heady speculating sessions.

Moving this fast for no reason makes fools out of almost everyone: It has Brian Williams talking about what maybe did or did not happen with foreign training that may or may not have occurred on a trip that may or may not have mattered to one of the suspects. It has him joking to Tamerlan Tsarnaev’s boxing coach that Tamerlan must have been tough because, well, “we’ve all seen 'Rocky.'” It has Fox's Megyn Kelly reading the lyrics to "Forgot About Dre" like they are some evil spell. It has CNN’s Chris Cuomo asking a counterterrorism expert with 30 more seconds of airtime the epic existential question, “How can you be good and bad at once?”

The news networks are trying to make sense of everything before they have the information needed to make sense (or the information needed to know it will never make sense). As an NPR reporter put it — and this helps explain why NPR, not as slavishly devoted to the new and fast, has had so much better coverage than TV news — “We are collecting dots. It's a day to be careful about connecting them.” TV news keeps trying to connect them anyway. It’s against this backdrop of puffed-up insight that all the interviews with the people who knew the two bombing suspects are so gripping. The uncle, the aunt, the kid who smoked a bowl with Dzhokhar and the one who still can't believe that he did it are all processing what's going on in human, not news time: You can see them working it through, struggling with it, not providing answers they don't have. There's something to that.