Guests examined what the attacks mean locally, nationally and internationally 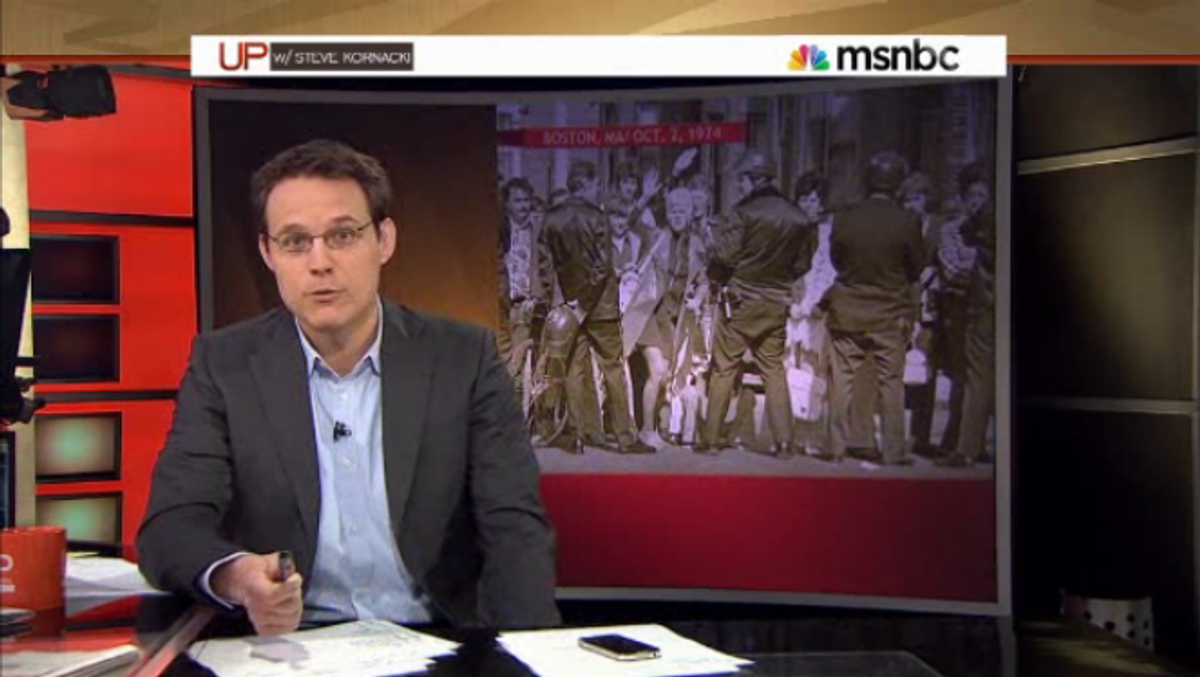 Today’s Sunday shows, like everyone else, tried to pick apart the details of how and why the terrorist attacks occurred in Boston this week. On CBS’s “Face the Nation” Bob Schieffer interviewed Rep. Mike McCaul (R.-Texas), Chairman of the House Homeland Security Committee.

“My theory is [Tamerlan Tsarnaev] was radicalized by 2009, 2010,” McCaul said. “Reports show the Russian Intelligence Service reach out to our law enforcement to interview this individual, which they did. He was on the radar, then he got off the radar. Then he travels overseas. I would assume the Russians would have some intelligence on this individual.”

Although he lacks direct evidence McCaul appeared to suggest that Tamerlan, who reportedly had a bomb strapped to his chest when he was shot, had ties to international terrorist networks. “I think another important point [is] the tools of trade craft used here,” McCaul said. “This pressure cooker device is very similar to what the Taliban in Pakistan use. The idea that they could make pipe bombs and then there are reports they had suicide vests, all point to the fact that this was…”

McCaul added that he has requested information from the FBI, Homeland Security Department and Director of National Intelligence about the 2011 contact with the older suspect Tamerlan, who was killed during the manhunt. The younger and by most accounts better adjusted brother Dzhokhar is portrayed as a less pivotal figure. However, he’s the one who’s still alive.

Schieffer also focused on the local story with interviews with Massachusetts Governor Deval Patrick, and Boston Police Commissioner Ed Davis who gave some new insight into the endgame of Friday’s manhunt:

Ed Davis: There were shots fired from inside the boat. As to where they orient I can’t speculate at this point in time.

Bob Schieffer: Well, did he actually fire at anyone else there at either the police or the man who looked into the boat?

Ed Davis: No one was struck there, but there was gunfire emitting from the boat. It’s hard to say where it was aimed.

Bob Schieffer: And, and the man who looked into the boat, was he injured in any way?

Ed Davis: No he was not. He saw the suspect, retreated immediately and called the police. We were there instantaneously.

Here’s the video with Governor Patrick who said “I don't know that we'll ever be quite the same”:

Over at ABC’s “This Week,” George Stephanopoulos spoke to Boston Mayor Tom Menino

MENINO: I hope that the U.S. attorney, Carmen Ortiz, takes him on the federal side and throws the book at him. These two individuals held this whole city hostage for five days….

The mayor also defended the decision to essentially close the city:

STEPHANOPOULOS: Well, let me ask you more about that lockdown. Because some have suggested that it was an overreaction to lock down the city, was actually giving the terrorists exactly what they wanted. Are you convinced it was necessary?

MENINO: At the time the decision was made, it sure was. I had information that there was other things going on during the decision that was made. And I agree with that decision at the time, because of the information we had. And at that time, we found a pipe bomb in another location in the city of Boston, another individual was taken into custody in another location. So there was many activities going on.

Towards the end of the interview the mayor characterized the relationship between the brothers: “I think the older brother was really the leader, and the younger brother was, like you said, brainwashed by his brother, and he just was a follower. He followed his brother, the brother was -- read those magazines that were published on how to create bombs, how to disrupt the general public.”

In a digital segment, ABC asked Time Magazine’s Rana Foroohar about the attacks’ policy implications. She said it might not make much of a difference in terms of the domestic legislative agenda but it could shift the plates in international affairs:

The fact that the Boston bombers have been identified as Chechens may increase support for Russian anti-terrorism strategies and its approach to Islamic extremism. Although Russian-US relations have been strained of late, it’s possible that this could spur new counterterrorism work between the two countries. It will be interesting to see if it actually leads to any progress on other contentious issues that the countries have disagreed on, like Iran, Syria, etc.

And Salon contributor Steve Kornacki, now the new host of “Up” on MSNBC, lectured on Boston’s recent history: