Ke$ha and Ryan Lochte get the reality TV treatment 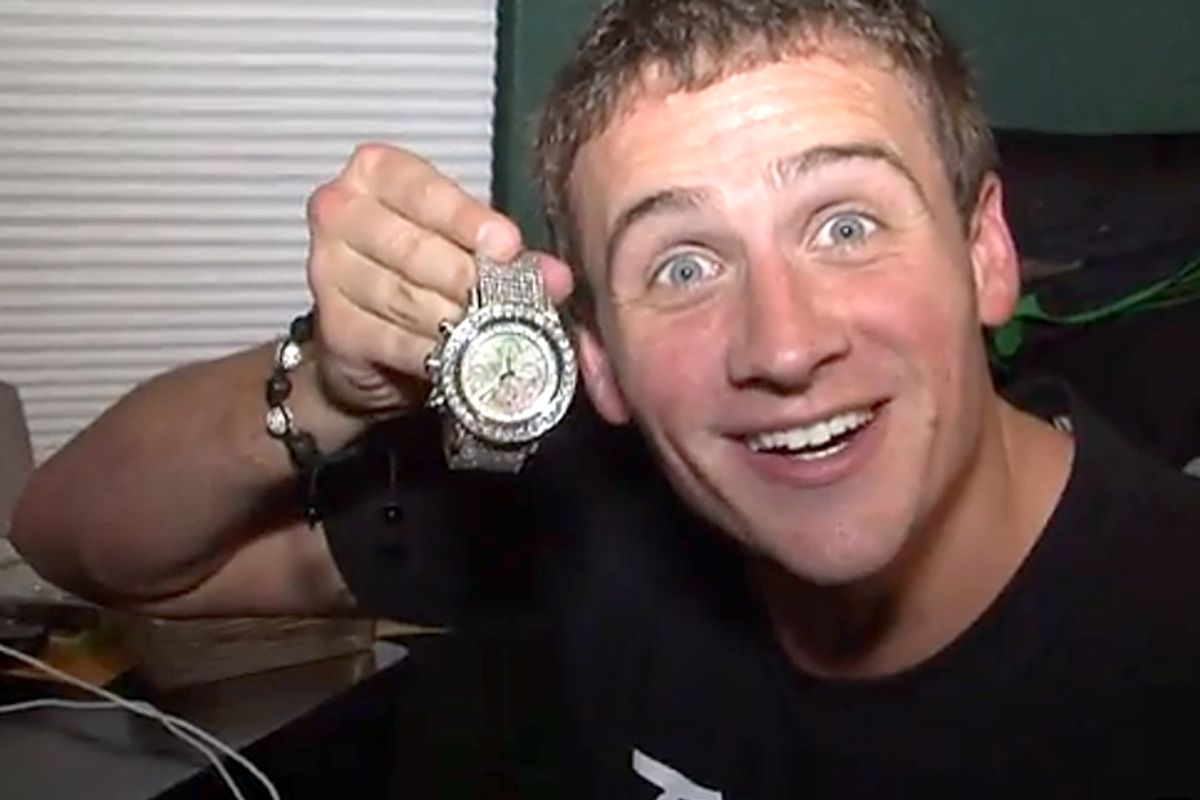 ‘Ke$ha: My Crazy Beautiful Life,” a reality show about the glitter-loving, jack-swishing pop star, began last night on MTV. “What Would Ryan Lochte Do,” a reality show about the grill-wearing, ab-having Olympic swimmer, began on Friday on E! Both shows are about people with physically demanding, time-intensive, all-consuming work lives. On tour, Ke$ha spends her days going from place to place so at night she can sprint around stage covered in body paint. While training, Lochte gets to the pool before most people are awake. Both shows are also about people who have cultivated — or, in Locthte’s case, maybe wandered into — reputations as partiers. Ke$ha’s songs are anthems to drinking and misbehaving. Lochte has convinced many that he’s a dim, brotastic douchebag. (Don’t ask him what that "douchebag" means, though: As he explained in his show, he really has no idea.) These shows are built around the second aspect of their stars' personas — that they are wild and vibrant and fun —  when it’s the first that's worthwhile.

At the beginning of "My Crazy Beautiful Life,” Ke$ha comes offstage after a rambunctious show sweaty and exhausted and barely able to speak. She asks, "Was it good?” and then says, “Let’s go get drunk!” The fact that Ke$ha was not already drunk is the key piece of information in this scene: work, then play. The shout-out to drinking is just brand management. For the rest of the episode Ke$ha spends time with her family, counsels her fans about being bullied, starts to cry at the idea of letting Perez Hilton into a party, and goes on and on about her first love, Harold (yes, Harold), who is now engaged to someone else. She wears lots of outlandish clothes and has a dirty sense of humor (she tells her brother to be a “cock flow” instead of a “cock block”) but appears sober. She does a series of radio interviews before Glastonbury, talking up Scottish men with ginger beards and kilts she could stick her hands up. It’s a showcase of her raunchy, boy-crazy sensibility but also her ability to give catchy interview while working her talking points.

Ke$ha’s series begins in April 2011, when she was headlining her first tour. In narration, her brother tells us he recorded her for two years, and the show we’re about to watch is a compilation of that footage. But “My Crazy Beautiful Life” is executive produced by Liz Gately and Tony Disanto, who oversaw “Laguna Beach” and “The Hills,” and it contains much of the same pretty, heavily massaged cinematography. The show cuts quickly from concert to concert, glossing nearly everything except Harold, and Ke$ha’s feelings about her fans. Ke$ha seems hardworking, down-to-earth and self-effacing.  She reads a New York Times review of her show that says it’s not sexy and says “that’s fair.” But she’s too busy working to be the kind of reality TV star “My Crazy Beautiful Life” wants her to be, the kind who obsesses over the minutiae of her personal life like a character on “The Hills.”  The most interesting thing about Ke$ha is not her ex-boyfriend, it’s that she’s a rock star, but her show keeps insisting otherwise.

Ke$ha cares about performing, she’s just more focused on doing it onstage than for a reality TV camera. Ryan Lochte, however, is totally focused on performing for the camera— there is just very little that is interesting about Ryan Lochte. If you take away the pool, he is just a pale approximation of a reality TV archetype. He talks a lot about dating: He would “like” to meet someone special, but until he does, he’s going to have a good time with the girls throwing themselves at him. Every single member of “Jersey Shore” or “The Real World” has found themselves in this position, but since they, unlike Lochte, were cast for their unhinged, out-there personalities, they can at least talk about this predicament entertainingly. They can also get into much more drunken, late-night trouble since they don't have to be at the pool in the morning. There are a number of “parties” in the premiere of "What Would Ryan Lochte Do." A big group of friends gather at his house for flag football, for drinks afterward, for a night on the town. But these events have obviously been constructed by producers, and compared to standard-issue reality TV debauchery are as raucous as drying paint.

The only thing that makes Ryan Lochte interesting is his work ethic, and how his work ethic and competitive drive have led him to covet not just gold medals but a very specific kind of fame, fame like the Situation has. That's a pretty twisted mind-set: Ryan Lochte became famous for accomplishing something, and has spent nearly every minute since trying to become famous like people who have accomplished nothing, except total media saturation and sponsorship deals. But then you watch “My Crazy Beautiful Life,” which takes Ke$ha and tries to make her Lauren Conrad, as if being Lauren Conrad is more interesting than being a woman on an international rock tour, and you can see why the suggestible Lochte might think there's nothing bigger in life than being Pauly D.