Pick of the week: Mark Wahlberg and Dwayne Johnson pursue the American dream in the cruel but funny "Pain & Gain" 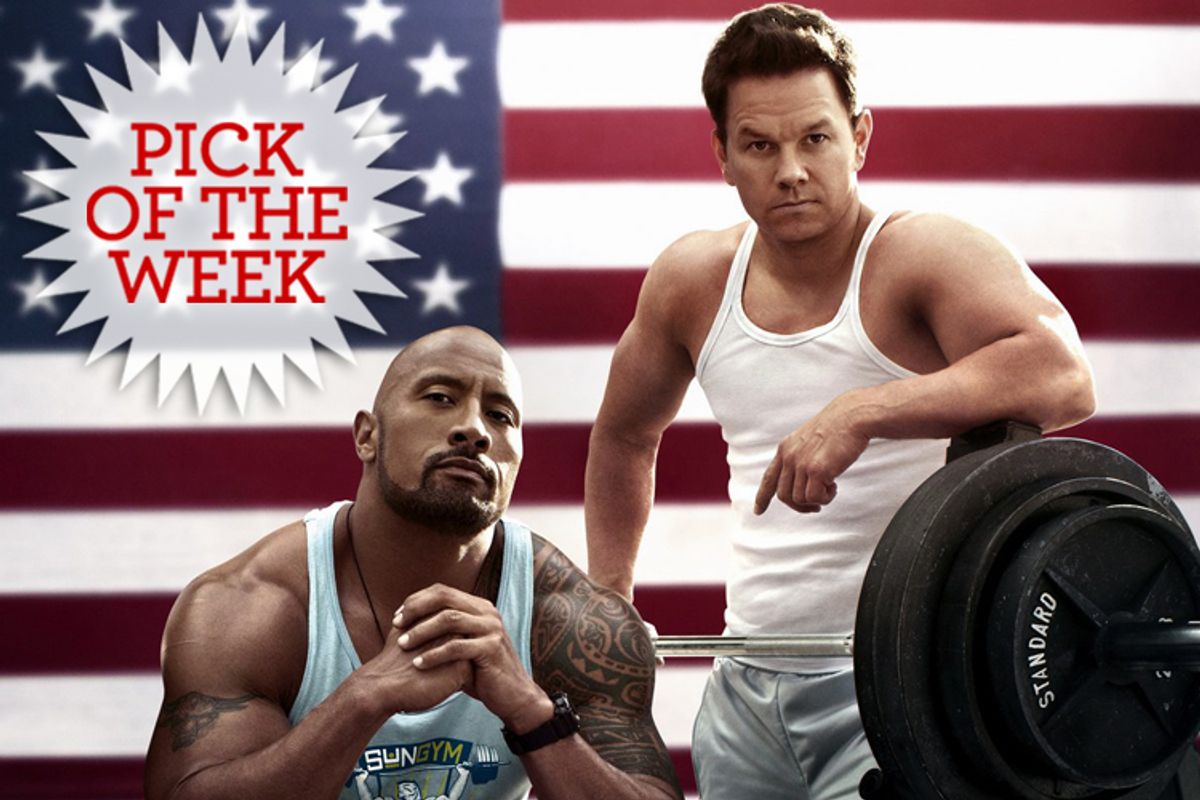 With his pumped-up and violent crime farce “Pain & Gain” – a thoroughly reprehensible and frequently hilarious satire that depicts American life as a circus of stupidity, artificiality and self-regard -- Michael Bay sends a clear message to those of us who’ve been making fun of him: He’s been in on the joke the whole time. I can think of a variety of responses to this, but they all basically boil down to “Yeah, so what else is new?”

There has always been a powerful current of self-mockery, or at least self-awareness, in Bay’s ludicrous “Transformers” movies, which embraced bigness, loudness, dumbness, visual incoherence and cartoonish female pulchritude (see: Fox, Megan, entire career of) as central formal elements and stylistic first principles. I wasn’t the only critic to observe that Bay’s enormous 2011 hit, “Transformers: Dark of the Moon,” had elements of avant-garde surrealism and elements of high camp, and could be described as a “performance-art act of juvenile Id-fulfillment.”

It’s perfectly legitimate to argue that the fact that Bay’s movies are chaotic teen-boy dream landscapes on purpose doesn’t make them any good. Or, even more to the point, that there’s really not much difference between celebrating America as a vapid symbolic spectacle and making fun of it. But the argument that Bay is an incompetent idiot, after the fashion of fabled Eurocrap auteur Uwe Boll, simply doesn’t hold water. Indeed, the utter shamelessness of the “Transformers” pictures, and their winking-at-the-audience embrace of utter shamelessness, is a large part of their mass appeal, and anyone who doesn’t understand that hasn’t been paying much attention to pop culture over the last few decades.

It’s all very well to talk about “Pain & Gain” as Bay’s pet project or indie film or whatever, and at times it feels like a nastier remake of “Fargo,” transported from the used car lots of the northern Midwest to the gyms of South Florida and given a killer abdominal workout. (I almost recommend a double bill of “Pain & Gain” and Harmony Korine’s “Spring Breakers,” except that it might prove to deliver a toxic overdose of Sunshine State sleaze.) But it’s much more of a piece with his previous work than that makes it sound. Arguably all Bay has done since “Transformers: Dark of the Moon” is shrink the giant robots down to the still-impressive size of Mark Wahlberg and Dwayne Johnson, remove any pretense of sympathy for any of the characters and thrust the satirical comedy front and center, in “Simpsons” or “South Park” fashion, where even bicoastal eggheads can’t miss it.

If you’re looking for journalistic accuracy or dramatic subtlety, I might suggest that a Michael Bay movie is not an appropriate place to start. But Christopher Markus and Stephen McFeely’s screenplay for “Pain & Gain” is based, with reasonable fidelity, on a series of newspaper articles by Pete Collins about the “Sun Gym gang,” a group of Florida bodybuilders who hatched an inept and sadistic but very nearly successful criminal scheme in the mid-1990s. Wahlberg plays the group’s ringleader, a personal trainer named Daniel Lugo whose supposedly positive attributes – his patriotism, his optimism, his can-do initiative – lead him in entirely the wrong direction. If Wahlberg has now built a career on playing deluded American dreamers, guys who suggest directions he himself might have gone (or so we imagine) if he weren’t a movie star, Daniel is the most toxic of them all. He’s just smart enough to understand that the people who thrive in America are crooks and hustlers, but not smart enough to understand that he’s not smart enough to be one.

Daniel’s two sidekicks aren’t quite as consumed by evil, but they’re even dumber. Anthony Mackie gives a sly, funny performance as Adrian, a fellow trainer whose principal interests in life are bulking up with steroids, protein shakes, breast milk and other real or apocryphal exercise drugs, and pursuing the sort of amply proportioned women known in pornography as “BBWs.” (Rebel Wilson gets a brief but enjoyable role as his love interest.) But much of the true delight in “Pain & Gain” – and isn’t this often the case? – come from Dwayne Johnson as Paul, a born-again 12-step ex-con with multiple felonies in his past and his future. Paul has no chip on his shoulder, unlike Daniel (who remembers the rich kids in his neighborhood taking vacations “to places like Paris and France”). Paul loves Jesus and his sobriety, temporary though it may be, and genuinely wants only the best for everybody. The fact that he is entirely devoid of self-control or judgment, and that he will wind up snorting cocaine off a stripper’s ass, getting his toe shot off during a botched robbery and betraying his so-called friends, is a source of wonder and mystery for him.

After himself falling under the spell of an especially idiotic Asian-American self-help guru named Jonny Wu (the inescapable Ken Jeong, who nails this assignment), Daniel convinces his camp followers to join him in a plot to kidnap and fleece one of his gym clients, a slimeball millionaire named Victor “Pepe” Kershaw (Tony Shalhoub). And let’s say this for Bay and his writers: There’s nothing half-assed about the nihilism of “Pain & Gain.” Kershaw is depicted as a verminous creep who richly deserves to lose his bayfront mansion, his sports cars, his business (the Schlotzsky’s Deli franchise near the Miami airport!) and his offshore accounts in the Bahamas. He might be the only person in this movie less likable than Daniel – at least until Daniel and friends abduct Kershaw and torture him mercilessly (in a warehouse full of homoerotic sex toys), and only fail to kill him because their unnecessarily elaborate ideas about how to commit murder appear to come entirely from bad movies.

You see, there’s the essential paradox of “Pain & Gain,” which veers from remarkably pithy moments of social satire (and quite a few big laughs) to painful and overstylized visual and auditory assault, in the great Michael Bay tradition. It makes fun of these criminal lowlife losers for pursuing a vulgar and stupid vision of American success – fast cars, leggy girls, big houses, vicious crimes -- which is precisely the vision Bay has been pimping throughout his filmmaking career. When semi-retired private detective Ed Du Bois (Ed Harris) comes into the story, as the only person who believes Kershaw’s outrageous story about being kidnapped and tortured by bodybuilders, he’s both enforcing normal standards of morality and also policing the borders of irony and fantasy. Daniel and friends didn’t get the great Socratic joke of American life: We’re constantly told we can have it all, but those of us who are savvy enough understand that it’s a lie. Michael Bay and Mark Wahlberg and Dwayne Johnson can have it all, maybe, and we can enjoy it by proxy, from a distance.

Have I now talked my way back around to the position that “Pain & Gain” is a fundamentally immoral and hypocritical picture, a scathing satire about the great Ponzi scheme of American life that simultaneously serves to justify it? Well, of course. This is a Michael Bay movie: Hypocrisy and immorality are its text and subtext and footnotes, the coke it snorts off a Croatian hooker’s spray-tanned bum and the exploding green goo on its stolen banknotes. If anything, Bay tries to drive home the point way too forcefully here, the point being that he’s one of the most important, influential and (certainly) representative American film directors of the last 20 years. Did I say he was “good,” or that I “liked” him? I did not, and your insistence on such old-fashioned categories is charming, in a way. Don’t even pretend you don’t want to see this, and don’t come complaining to me if you feel dirty afterward. Isn’t that the whole idea?