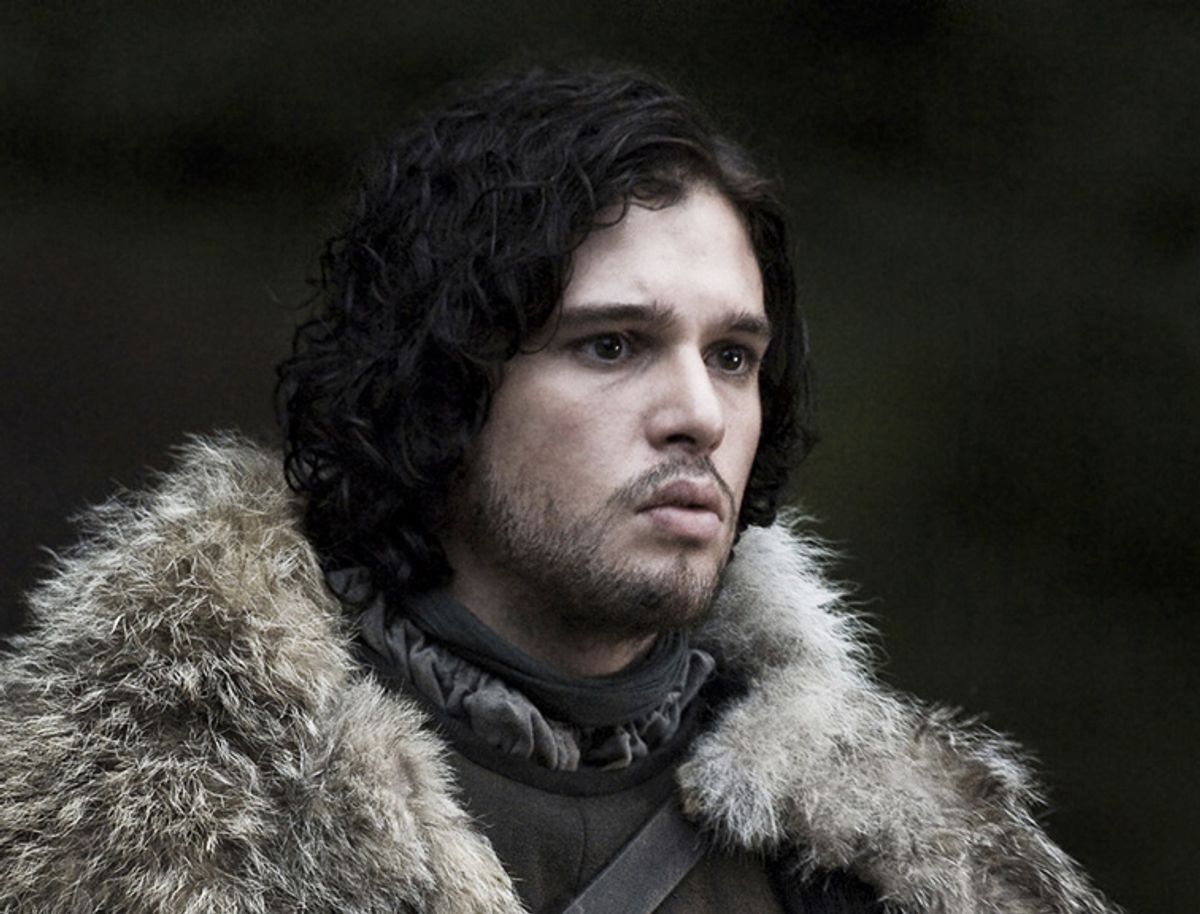 Let’s start with the most substantial aspect of this episode: man butt. “Kissed by Fire” is the episode of “Game of Thrones” where the writers finally said, “OK, OK, we will do something about our show's gross nudity imbalance across genders.” So after Ygritte takes off her clothes, it’s John and Jaime’s turn to flash some tush, and then Loras’s conquest/Littlefinger’s spy puts a new twist on the “random character we have never met going full frontal” role just by being a man, instead of woman.

Even more remarkably, the camera opts not to ogle Brienne of Tarth, treating her with the sort of restraint it usually reserves for its male characters. Jaime climbs in the bathtub with her and goads her into anger; she lurches up at him in the altogether. But while Jaime gets a good look at the whole Brienne, the camera stays squarely on her face and shoulders, never straying down. We see a flash of her backside, but that's exactly the amount of nudity usually asked of the fellas. This is both respectful and complicated: Brienne, who is more ‘masculine’ than the other female characters, more attuned to the idea of male honor, gets treated with visual restraint. I’m sure, if she knew, she would appreciate the courtesy. But maybe all the other women on the show would prefer not being objectified too?

Phalli, literal and figurative, are all over this episode. It begins with a flaming sword fight, a snazzy update on any standard duel. Then Ygritte steals John Snow’s sword, as a bit of foreplay meant to activate his, you know, actual sword. “Game of Thrones” has been very keen lately to tell its audience that virginal men make excellent lovers, and so first-timer John gets lots of compliments for thinking of cunnilingus. I was confused why a nice, warm place where you can have a bath is not teeming with other wildings, but somehow Ygritte and John get the place to themselves for a while, long enough for Ygritte to outline her sexual history, get in a classic “Game of Thrones” gender-reversal rib — John's a “maid”— before telling him “I don’t ever want to leave this cave,” which seems uncharacteristically earnest of her.

Robb’s swordplay is not nearly as romantic. After Lord Karstark slays the two young Lannisters, Rob hangs his accomplices and then chops off Karstark’s head in the pouring rain, just like his father taught him to. (Water recurs almost as much as swords: Robb gets soaked meting out justice, there’s John and Ygritte’s hot spring, Brienne and Jaime’s bath — if you were as dirty as Jaime, would you not have dunked your head before giving a long speech about how you’re really not a horrible guy? — and then Stannis’s wife Selyse keeps her dead sons and fetuses preserved in liquid, like she’s running her very own Mütter museum.) Robb kills Karstark against the advice of both his wife and his mother, who think it's logistically unsound: Robb will lose the support of Karstark’s men. Robb does it anyway. “How can I fight for justice if I don't serve justice to murderers in my ranks,” he says, sounding an awful lot like his father, an honorable and good man who, in the words of Varys way back in the first season, “disdained the game and those who play it” and ended up dead for all his virtue.

Robb wants to be the kind of leader who deserves his leadership, another big theme of this episode, even if Karstark ends his life saying to Robb “You are no king of mine.” Gendry, looking extremely grown, tells Arya he’s going to stay on with the Brotherhood Without Banners. “I’m done serving,” he tells her, or at least done serving any man foisted on him. The Brotherhood picked Beric Dondarrion as their leader and he wants to be part of their family. Arya tells him he can be part of her family, and then I plugged my ears and started going la-da-di-dah so I couldn’t hear, because I like Gendry and I like Arya, but any talk of him making her his lady needs to wait until that doesn’t look so wildly inappropriate. Jorah and Selmy, meanwhile, have a half pissing match, half compliment session about how awesome it will be to finally serve a leader as great as Dany, who is continuing to win hearts and minds by telling the unsullied they no longer have to be named after vermin.

And then there’s Jaime’s speech to Brienne about the circumstances under which he killed the Mad King: when the Mad King refused to surrender, planned to light thousands of innocent people on fire, and told Jaime to go kill his father, which seems like good justification for breaking an oath even to Brienne. Jaime’s speech is moving — though again, dunk your head, dude — but I wonder if something hasn’t been lost from the books here. All we, the audience, know about the Mad King: how terrible, horrible, no good and very bad he was. With Ned, the Baratheons, and Tywin already marching on King’s Landing to dethrone him, is it really so much worse that Jaime killed him, even if Jaime had sworn to protect him? Isn’t disobeying unjust authority and fighting tyranny what patriots do? (If only someone Joffrey trusted would kill him!) The show hasn’t made it clear just how heavily this weighed on Jaime, just how much it colored everyone’s opinion of him, just what a betrayal it was until this moment, when it alters Brienne’s entire perception of him.

Jorah and Selmy's conversation, as well as Jaime's confession, show that in this world, once you are someone's subject, you are never supposed to cut ties with them, no matter what they do. The only person more powerful than a king is a parent. Arya, talking with Beric about his six resurrections, wonders if they might resurrect a man without a head, “not six times, just once.” Her father’s absence is still an open wound. And then there’s the very last scene of the episode, in which Tywin and a smug Cersei inform Tyrion he’ll have to marry Sansa Stark. (Cersei may be awful, but Lena Headley is great. Her “yes it is” while she waits for Tyrion to grasp the nature of the “good news” they are discussing is perfectly condescending and malicious.) Then Tywin — who appears to be wearing a large Mockingjay brooch?— turns the tables on Cersei. She’ll have to marry Loras as well. She tries to fight back —“ I am queen regent, not some brood mare” — but Tywin stomps all over her, bringing up Jaime and reducing her to begging, “Father don’t make me do it again, please,” a reference to her first marriage so sad she momentarily seems sympathetic. It’s no use. Tywin makes the rules. Cersei and Tyrion end the episode like children, united in their powerlessness before their father.