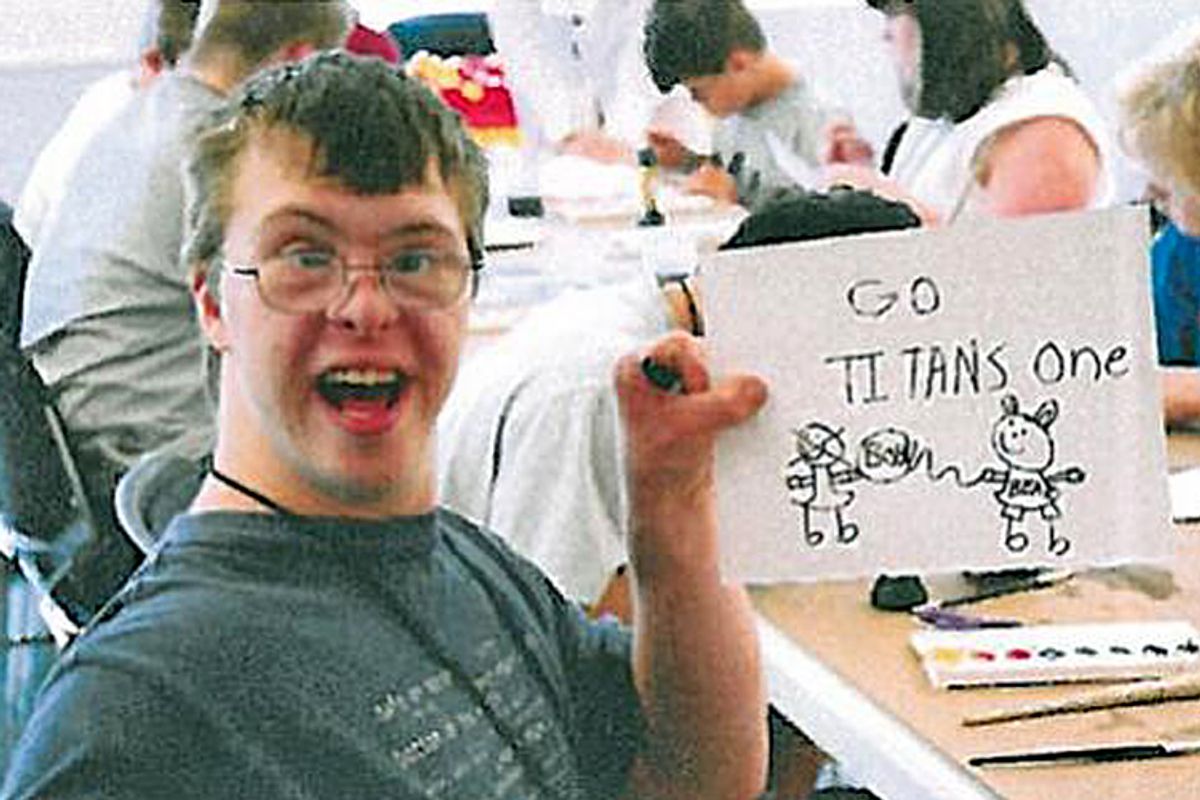 This photo of Adam Holland was altered and used by radio station WHPT-FM for a "Retarded News" segment.
--

Nashville couple Bernard and Pamela Holland didn't even take the photograph. It's a 9-year-old image of their son Adam as a teenager, smiling broadly as he holds up a drawing he made in art class. It's a photo that's now generated an $18 million lawsuit.

The Hollands filed the suit against Cox Media, claiming "invasion of privacy, misappropriation of likeness, defamation and emotional distress" after the image of Adam, who was born with Down syndrome, began appearing as a punch line on various websites. Most notably, Cox's Florida radio station WHPT-FM's Cowhead Show reportedly altered the photo of Adam to make it appear he was holding a sign touting its "Retarded News."

The station's director has apologized, sort of, by issuing an email that says, "The segment 'Retarded News' is designed to highlight odd stories that are seemingly always in the news. Stories such as botched bank robberies and failed crimes. These stories are NOT about disabled individuals." I guess if you're using the image of someone with Down syndrome on your "Retarded News," but not actually talking about people with Down syndrome, he thinks it's somehow ok.

The story has echoes of the strange fame of Adalia Rose, the little girl with a premature aging syndrome who became an unlikely viral star last year after her family posted a video of her dancing. And this being the Internet, her fame has been defined by the trolls.

There is no topic that's taboo, and no individual on the planet who is beyond satire. The very first time I fell in love with the Onion, it was over a headline: "Special Olympics Fixed." ("An estimated 15,000 athletes participated in the Special Olympics this year, and, according to Special Olympics awards records, every one of them was declared a 'winner.'") And of the many, many provocative characters "South Park" has ever given us, surely one of the greatest has been Nathan, a scheming monster who also happens to have Down syndrome.

But it's a different thing entirely to take an image of a real kid, without permission, and use it to make fun of him. And by the way, being mean isn't automatically daring and subversive. Sometimes it's just lazy. The Holland suit also names a company called Sign Generator, for using Adam's image as part of a "Retarded Handicap Generator." That's not even trying to be clever or witty.

The word "retarded" is a loaded – if still remarkably common – one. Only last week, the Florida state Senate passed a bill that would replace it in its state laws. And writing about a mentally disabled man on Georgia's death row earlier last week, Atlantic writer Andrew Cohen referred to him repeatedly as "retarded," noting it is "the legal term of art used by the Supreme Court and lower courts." Yet it's a dated and derogatory word, one that the Cowhead Show and Sign Generator's usage makes clear. Is it worth $18 million? Unlikely, but with luck the lawsuit will make some other unfunny bully think twice before reappropriating the image of a kid daring to be happy and engaged -- a state you get the sense nobody on the Cowhead Show has ever experienced firsthand.

On Tuesday, I asked my friend Stacey, whose son Carter has Down syndrome, about her feelings about the term. She said, "It is used in a mocking, demeaning way that marginalizes an entire community of people. It's similar to the use of the words 'gay' or 'fag' as insults. The true meaning of these words is not offensive ... it's the malice behind the use that makes it wrong. Carter has Down syndrome, but it doesn't define who he is or who he is going to be. There are artists, musicians, singers, dancers, writers who have Down syndrome. The only limits to what Carter can/will do will be set by those people he associates himself with." And, she added, "The people who do these sorts of things are, always, just assholes."