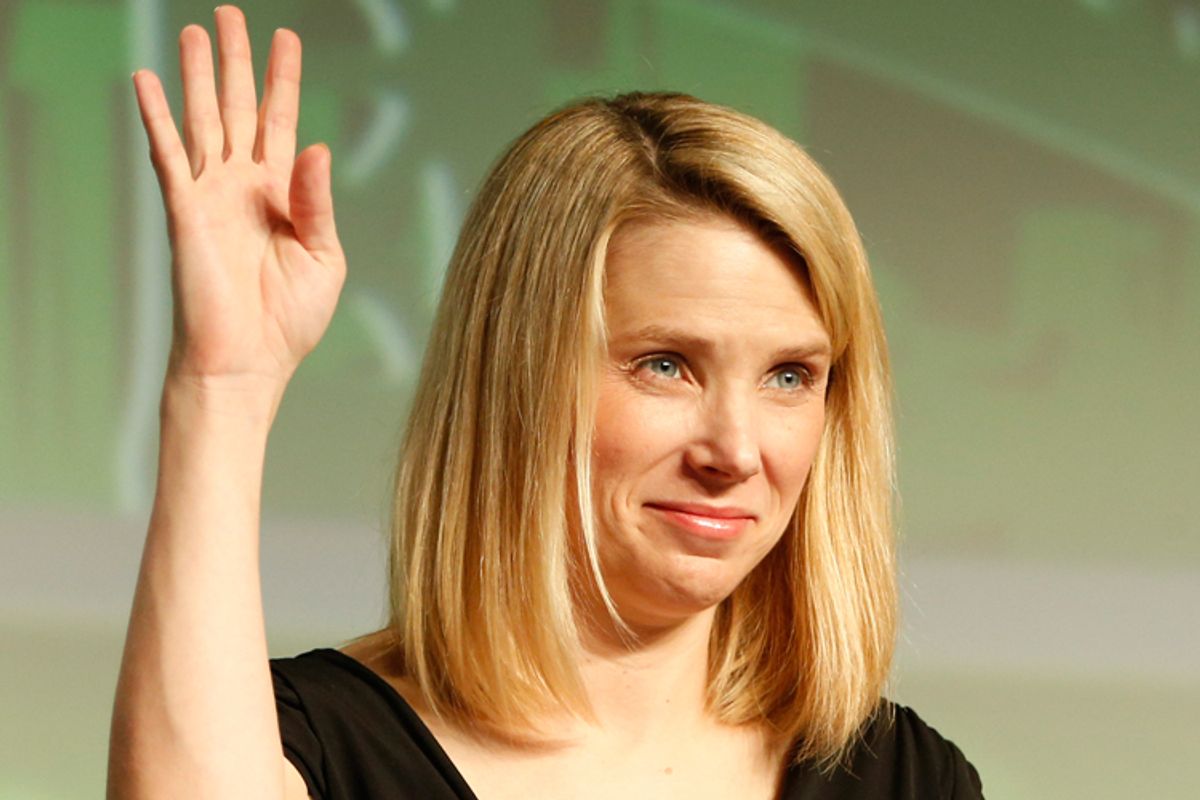 Well, it's a start, I guess. On Tuesday, NBC broke the news that Yahoo, of all places, has now significantly upped its family leave policy. The company will now increase employee maternity leave from eight weeks to 16 weeks, and offer new dads eight weeks paid leave. It will also give new parents $500 "to spend on such things as house cleaning, groceries and babysitters, plus Yahoo-branded baby gifts." What's this, boss? A tiny onesie with a corporate logo on it? You shouldn't have! So yeahhhhhhh, thanks.

In recent months, Yahoo has not won a reputation as the most family-friendly of organizations, in spite of its new CEO, Marissa Mayer. You may recall hearing a word or two about how everything in the world was going to be different henceforth for working parents back when Yahoo hired her last year, while she was still pregnant. Instead, Mayer made good on her vow to power through her own brief maternity leave like a character out of Monty Python, popping out a baby while never breaking stride. True to form, by November, she was confidently declaring, "The baby's been way easier than everyone made it out to be."

Then in February, Yahoo's H.R. department issued a memo insisting on employees "physically being together" instead of working from home -- a move that directly impacted "several hundred" work-at-home employees -- and everyone who occasionally opts for flex time. The company scoldingly advised employees who might have to stay home sometimes, for, say, the cable guy, to "please use your best judgment in the spirit of collaboration."

So for Yahoo to now offer a perk to working parents comes at an opportune time, one in which a little humanizing spin is needed. Writer and media watcher Rachel Sklar declared the decision "a smart move" Tuesday, saying, "It suggests a long-term strategy. This is a great precedent."

It is a smart move. It's a healthy one for families. But it doesn't go nearly far enough. It doesn't change the company's stance on flexible scheduling and arrangements – a policy that is already taking a tough line with workers who request leniency. It doesn’t acknowledge that flexibility is not something that parents alone need, and then only for the first few weeks of a child's life. Instead, it suggests that after a respectful amount of bonding time, mothers and fathers can return to work and not have another personal need again until the next baby. Which is about as close to reality as my Yahoo mail avatar.

As Anne-Marie Slaughter famously argued in a waves-making Atlantic story last year, there's a whole different set of work-life balance needs when you're raising, as in Slaughter's case, adolescents. Or when you're taking care of an ailing family member. Or when your spouse is doing a three-month project in another city and you'd like to be there with him or her. Or when you're going through chemo and can barely drag yourself out of bed. And a rigid corporate policy that doesn't leave any wiggle room for individual needs is a bad corporate policy, especially for a company that's trying to attract talent.

For Yahoo to throw the bone of a few extra weeks of time to its workers -- and then only those workers who are currently reproducing -- is merely a nice but small gesture. In a statement Tuesday, Yahoo said, "Recently, we rolled out some new and improved benefits to support the happiness and well-being of Yahoos and their families." It added, "Over the last several months, we’ve introduced new benefits like free food to make Yahoos' days easier, new smartphones to encourage innovation, and updated computers to speed productivity."

Free food and smartphones are all well and good, although those perks do seem nicely calculated to keep workers either at the office or tethered to their electronic devices. What Yahoo still doesn't seem to get is the irreplaceable value of time -- and what they don't seem to recognize is that people other than the parents' of 8-week-olds feel it as well. You want to call yourself innovative? You've got to do a lot better than add a few benefits for a select segment of your workforce. And you've got to do a whole lot better than a gift bag of brand-name-festooned baby swag.