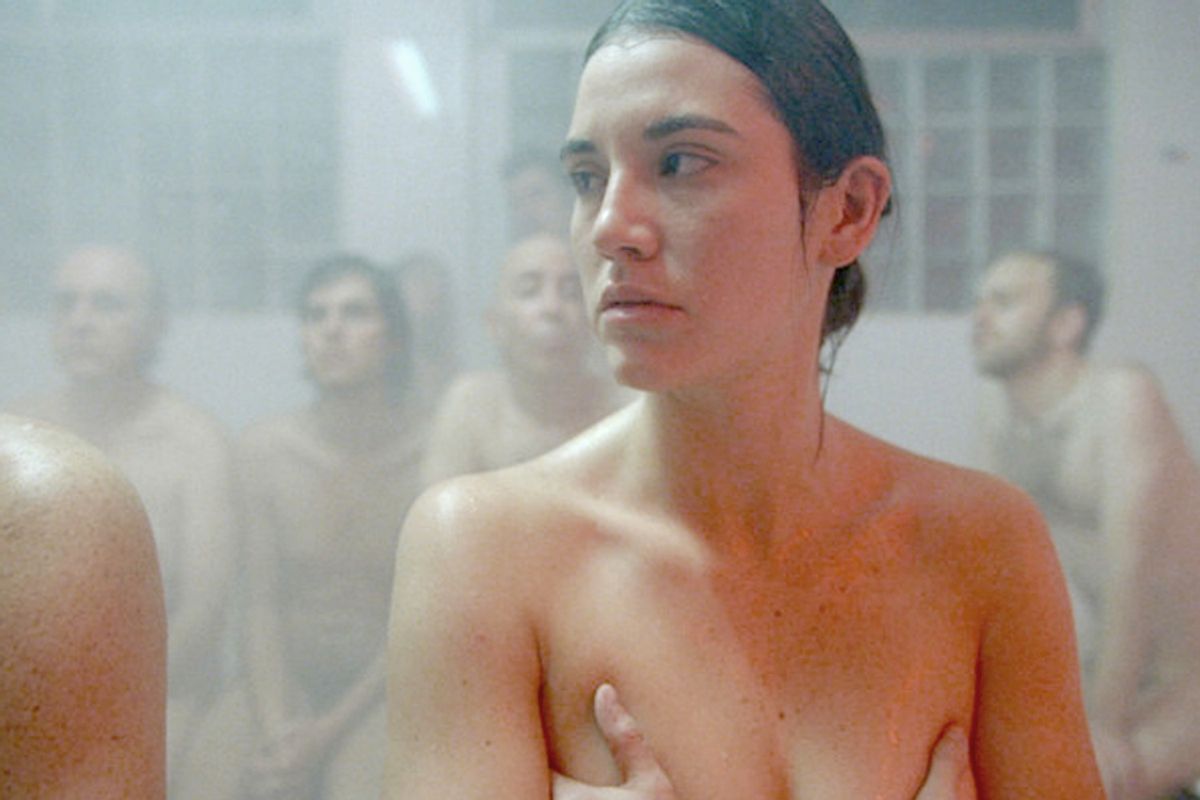 A mesmerizing combination of opaque art-house cinema, personal reflection and class-based rural thriller, Mexican director Carlos Reygadas’ “Post Tenebras Lux” casts a strange and powerful spell. While this is certainly a challenging film on many levels, and one rooted in observation of the natural world, it isn’t one of those drifty contemplative Terrence Malick spectacles where nothing much happens. It’s just that many of the events are puzzling and disconnected, and you have to work out for yourself the allusive or subterranean relationship between them. There’s a neon-red animated demon who invades a family’s home at night, a shooting, a hilarious and heartbreaking rural A.A. meeting, a visit to a perverted sex club and a guilt-ridden killer who commits suicide in the most spectacular fashion imaginable. It’s as if we were sometimes in the world of David Lynch, sometimes in the world of Stanley Kubrick and a whole lot of the time in the world of Andrei Tarkovsky, with the complicated social tragedy of Mexico ladled on top.

Indeed, “Post Tenebras Lux” might be the movie of the year – if we lived in some other universe where people didn’t expect movies to “make sense,” or even to tell a story in the normal sense. In this universe, Reygadas is often understood as a provocateur, not without reason. His first feature, “Japón” (not set in Japan) featured documentary-style scenes of cruelty to animals that outraged some viewers, and his 2005 “Battle in Heaven” featured several scenes of unsimulated sex, including a memorable blow-job sequence that opens the film. His most recent film, “Silent Light,” was the first and no doubt only feature ever made in the Plautdietsch language, a form of Low German spoken by the Mennonites of northern Mexico, and depicted a miraculous event made flesh.

While “Post Tenebras Lux” -- the Latin phrase means “light after darkness,” and is historically associated with the Protestant Reformation – makes little effort to please the audience or explain itself, I never felt Reygadas was trying to be confrontational for its own sake. It’s clearly a divisive film, even in the rarefied world of art-film devotees. Reviews have been mixed at best, even, or especially, from those who thought that with “Silent Light” he was becoming more accessible. Reygadas won the best-director award at Cannes last year (despite boos at the press screening), but the movie was passed over for the New York Film Festival, pretty much dooming its chances for major media attention in the United States. So I’m here to issue the usual caveats about how this may not be your kind of thing, etc., but mostly to say that if you’re open to an abstract, associative experience that’s completely different from most other movies (or all of them), this modestly scaled and deeply personal film is a work of visionary daring, beauty and heartache.

Shot in a nearly square format with the outer portions of the image often distorted or doubled, as if it were a half-remembered dream or a drug experience, “Post Tenebras Lux” does tell a story of sorts, maybe one driven by the unconscious that asks us to fill in the blanks from our own experience. For several minutes before the opening credits, we watch a little girl wander around a field as day sinks into dusk, calling the animals by their names (“Vacas! Perritos!”). Eventually we’ll figure out that her father is Juan (Adolfo Jiménez Castro), the bohemian architect who has moved his family out into the spectacular mountains of Morelia, a few hours from Mexico City, and that the entire scene may indeed be her dream. It may be helpful to know that she and the other young girl seen in the film are Reygadas’ real-life children, and the rustic wooden house they live in is really theirs too. Or maybe, on the other hand, it isn’t.

But what does the realistic, documentary-style story about the tormented and abusive Juan, his gorgeous but doormat-ish wife, Nathalia (Nathalia Acevedo), their kids, and their anxious, half-friendly relationship with the darker-skinned peasants of the region have to do with that deeply sinister red night-specter with the toolbox and the dangling penis? Or with the scene in a Francophone sex club whose rooms are named after famous writers and artists? Or with the rugby match at an English boys’ school? One can answer some of those questions, sort of – Reygadas actually attended that school in Derbyshire, and played rugby there – but I suspect that’s mostly missing the point.

All films bear some relationship to dreams, and “Post Tenebras Lux” strikes me as an effort to go below the rational, official, narrative language of cinema to re-create the mysterious connective tissue of dreams in cinema. As I’ve said, it opens with a dream sequence – and later, when Juan lies in bed grievously injured and perhaps dying, Nathalia sings him a halting, off-key and oddly lovely version of Neil Young’s “It’s a Dream.” Why does he gaze, in a mood of wistful nostalgia, at a photograph of the Spanish golfer Seve Ballesteros at the British Open? I know I sound like someone returning from an acid trip – not a bad analogy – but it made perfect sense at the time. I felt, while I was watching the movie, that I understood it well enough. I understood, at least, that life on earth is fragile and terrible, and every moment of it is exquisite in its own way. I understood that what we love is almost certain to betray us and destroy us, and that what we think we understand about ourselves and the world is almost certainly wrong. I also understood that while this movie is deliberately constructed so that almost nobody will “get it” or like it – and I’m not sure how I feel about that perversity – it’s a masterpiece despite that, or because of that or just anyway.

"Post Tenebras Lux" is now playing at Film Forum in New York. It will open June 7 in Los Angeles, with other cities and home video to follow.